The Zoute Concours d’Elegance held on the coast in Knokke-le-Zoute is the Pebble Beach of Belgium, in a city that is very much that nation’s Palm Beach.

The Zoute Concours d’Elegance held on the coast in Knokke-le-Zoute is the Pebble Beach of Belgium, in a city that is very much that nation’s Palm Beach.

Replete with luxury hotels, boutiques, more high end SUVs than you can shake a stick at and impressive, charming old houses, it is quite a large town.

A fast growing event beginning to attract international participants, it is a part of the Zoute Grand Prix with various road tours for classics and current GT cars.

A Bonhams auction takes place Friday evening on the seafront, Albertplein, where many manufacturers are also represented in hospitality units by their importers or local dealers.

Ferrari showed a Portofino and a 488; oddly there was no Maserati representation whilst Lamborghini and Bentley were out in force and Mercedes showed a dummy of its future hypercar AMG ONE.

The concours on the golf course is a two-day affair with judging on Saturday, the awards during the lunch banquet on Sunday after which the cars head over to the seafront where they are paraded in front of the general public and commented upon when passing on a raised podium. 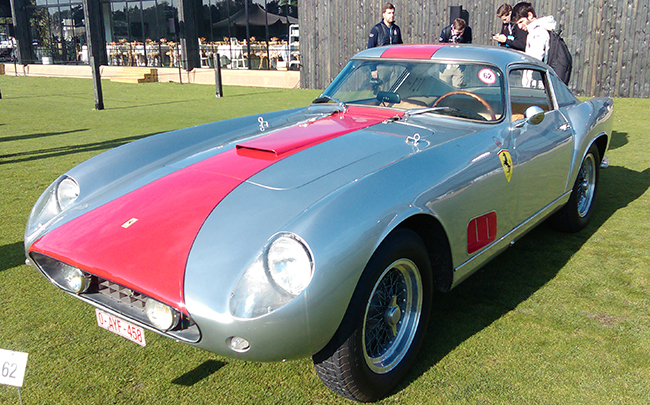 Ferraris present included a 1957 250 GT TdF S/N 0747 GT, in wonderful preserved condition. Sold new to Jean Aumas in Switzerland, it finished third in that year’s Tour de France with Jean Lucas and Jean-François Malle, before taking part in various races in France and events in Switzerland, winning the Dübendorf Zurich slalom that year.

Jean-Pierre Schild then bought it in the summer of 1968 ending up 5th in the Tour de France with Roger de Lageneste and winning the Faucille as well as the Bière-Marchairuz hillclimbs.

It then passed through several owners including Peter Giddings in San Francisco before being acquired in the early 1980s by Italian Eros Crivellari who ran it several times in the Mille Miglia retrospective; it is now owned by a Belgian collector. 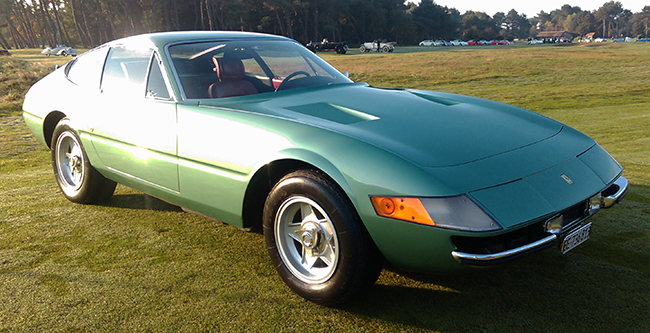 Spectacular in its unexpected and highly unusual verde medio livery 365 GTB/4 S/N 14261 was sold new in Belgium by the late importer Jacques Swaters to a local Baron, de Becker Remy.

In 1984 it went to his son who promptly sold the car. It was shown by Philippe Lancksweert who used to work with Swaters and told me that upon receiving the order for the car the factory had called to double check that this really was the color desired! It is now registered in Bern, Switzerland.

275 GTB/4 S/N 09285 was also entered, sold new in Italy where it spent most of its life; it was recently restored and brought back to its original silver by famed Modena area restorer Bacchelli & Villa (the latter having passed away in recent years).

A 250 GT Lusso gorgeous in light blue, chassis number unknown as the owner remained out of sight throughout, was the third from last built and delivered new in July 1964, it has recently had a mechanical rebuild by Autofficina Maranello and is Classiche certified.

A 1968 330 GTC S/N 11283 was entered, restored by Belgian dealer Monza NV. It was also shown on the Touring restoration department stand at Retromobile 2017. 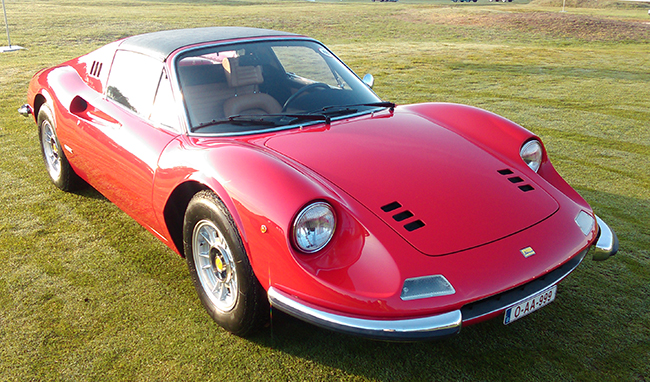 246 GTS S/N 05670 was another participant; it was sold new in Belgium where it had two owners. It received a full restoration this year by Officina Valenti a prominent Brussels workshop. The owner is a Dino aficionado who also has a well-known orange 206 which was displayed on Swaters’ stand in the Brussels show in period. 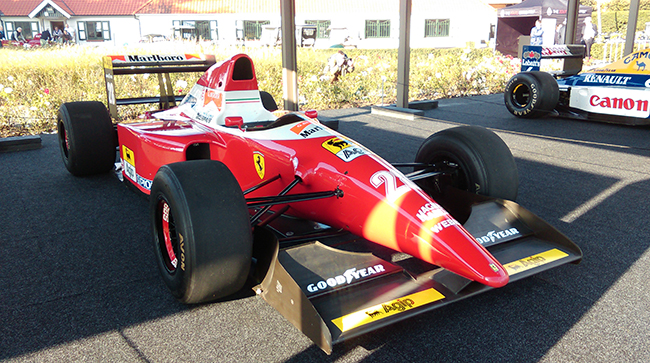 There was a covered F1 car display with eight chassis from various teams including a Ferrari raced by Gerhard Berger, a 1993 F93A hailing from a difficult season in which the Scuderia was recovering from a severe slump, though 1992 had been worse. In fact it was not until the next season that the team would end a multi-year win drought with Berger himself winning at Hockenheim in 1994.

A Pininfarina Sergio was displayed with other design studies and car show one-offs. Based on a 458 spider and premiered at the 2013 Geneva show as homage to the deceased Sergio Pininfarina. They expressed the design ethos of the Turinese firm in a distinctive but not universally appreciated style. The car in yellow and black was identical and perhaps the same as had been offered at the RM Sotheby’s May auction in Monaco.

About 16 BMW M1s, both race and road versions, celebrated the models 40th,  a herd of 911s celebrated Porsche’s 70th but they had been set to pasture on the far field, a wise move.

Some antique Rolls-Royce were quite a sight and one class was particularly interesting: shooting brakes. The Panther Westwinds Daytona was rumored to be coming but failed to appear.

The judges were of the highest caliber. Having been asked to present a client’s Maserati 3500 Vignale Spyder, I was shocked to recognize the leading judge in the small cluster who approached me: it was none less than Lorenzo Ramaciotti, former head of design for Pininfarina and later the whole Fiat group. He was extremely attentive to the car and what I had to say and very pleasant. The car later won its class but not in any way thanks to yours truly.

Other judges included Bonhams European director Philip Kantor who put a lot of effort into the whole event alongside the actual organizers Filip and David Bourgoo. François Melcion, president of the Retromobile salon, the ever present Adolfo Orsi, Harley Cluxton III (though I did not see him), Quirina Louwman, daughter of Evert, owner of the museum in Rotterdam across the border, Jeremy Vaughan, head of Motoring for Britain Royal Automobile Club, Gregory Noblet son of a man who raced 250 GTs in period and another US judge, Mark Moskowitz from North Carolina, vice chairman of the Motorsports Hall of Fame of America amongst other things, a very keen enthusiast who knew everybody, just retired and is eager to judge at other shows.

The time for the awards came during Sunday lunch in a huge marquee with top-notch food and wines, the Saint-Estèphe was brilliant, bedankt (thanks in Flemish).

This was a high energy affair with bursts of pop music just before each announcement. The only Ferrari to top its class was the TdF which won class 5: Post War Preservation.

The F1 class was surprisingly won by a 1984 Renault RE50-3. The shooting brake class was won by the one-off Lamborghini Flying Star which also got the longest distance drive prize having come from Paris: 320 kms/200 miles each way; well done and food for thought for some.

There was an amusing moment during the awards  when my client, an ambitious young man with important responsibilities, went to get his awards for the Maserati 3500 Vignale Spyder, he was not wearing a jacket... well in such a posh town the mayor’s wife harpooned him as he left the stage, taking his arm and saying, as though speaking to a teenager: “Well done young man, but next time put on a blazer.” Priceless!

Other major collectors from Belgium attended including one whose amazing stash I visited in 2011, including three, yes three, 500 Superfast.

I did not see any part of the touring rally for classics or the GT tour for current exotics but a very good idea must be noted: due to this being held on public roads the decision had been made to fit each car with a tracking device, holding each and every driver to the law.

If this were Utah or west Texas, the Apennines or Burgundy, it would be perhaps excessive but as Belgium has a very high population density it was a wise move particularly for the modern supercars where things can go wrong in an instant with the likes of Bugatti Chirons, LaFerraris, etc., ill-suited to the bumpy back roads of Flanders.

There were short closed sections for timed slaloms and acceleration tests to blow out the cobwebs. Many participants including former 275 GTS/4 NART Spyder owner Clive Beecham who brought a Jaguar D-Type from the UK wished the touring rally would have stopped at Spa or at least Zolder for some lapping, hopefully this will be integrated in future editions.

A show of the highest caliber, the Zoute Concours d’Elegance is certainly set to see robust growth in years to come.