Years ago, when I first heard of The Quail: A Motorsports Event, I wondered why The Quail was created because I thought, well, there is already a Pebble Beach. Why do they need another fancy concours?

Years ago, when I first heard of The Quail: A Motorsports Event, I wondered why The Quail was created because I thought, well, there is already a Pebble Beach. Why do they need another fancy concours?

I get it. This show is a lot more than a contest of the most elegant cars. It has become a social event.

This is a show created not only for men who are steeped in car culture but for the women to come and show off their finery. I wouldn’t doubt, after seeing the clothes worn by the spectators at The Quail, that many garments were bespoke-tailored specifically for the occasion.

And then there’s the food. I only partook of one meal but there were at least three gourmet restaurants and when I finally arrived (after a one hour traffic jam) everybody was already dining and socializing. Oh, some were looking at the cars but it is obvious that The Quail is much more social than a car show.

Officially called The Quail Motorsports Gathering, it has a lot of exclusivity to sell; there are only 6,000 spectators, limited in ticket sales so it won’t get too crowded.

The number of cars appears smaller than the 250 they claim but it’s such an eclectic mix: from hot rods to one-off coachbuilt cars, to new creations.

A prototype Ferrari was shown; the P80/C. You can tell this is a car made only for the track because it lacks headlights.

At The Quail automakers have booths right at the show, and very comfortable booths with leather couches, refreshments, magazines; all the comforts of home.

Among the businesses with booths was a yacht maker, and I thought, why not?

Owners of luxury cars live a lifestyle that doesn’t stop at cars. Too bad there’s no bay within viewing distance to park the boats.

They also celebrate anniversaries of cars, and this year at The Quail were anniversaries for the 25th Anniversary of the McLaren F1, the first 100 Years of Bentley Motors and A Tribute to the Electric Car Movement.

One odd thing about the show is that they are constantly expanding what they will invite. This year, I was surprised to see a 1949 Mercury Coupe.

A prewar car won Best of Show, a 1931 Stutz DV 32 Convertible Victoria by Le Baron, although with The Quail you can’t predict it will always be a prewar car that wins. 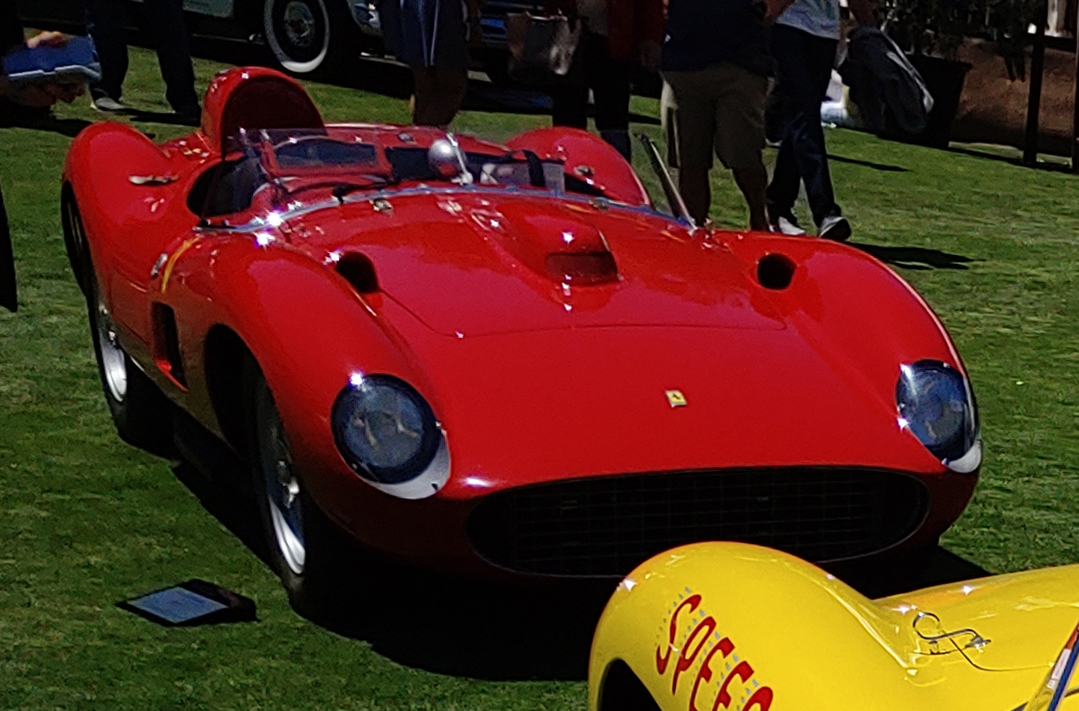 THE AUTHOR: A fine artist accepting commissions to paint portraits of Ferraris, Wyss provides you with a list of finished works if you write mendoart7@gmail.com.