250 GT PF COUPE, S/N 2003 GT (1960). White with red interior. Estimate $630,000 to $740,000. Completed in September 1960 and sold new in Milan to its first owner, Niccolò De Nora (ATS Automobili) on the 20th of that month. Originally finished in Grigio Conchiglia with nero part-leather interior. Equipped with the Tipo 128F engine, disc brakes, and overdrive transmission. Massini Report listing subsequent owners, all in Italy, up to 2017 when sold to the current vendor in France. The change of exterior color to white and interior re-trim in red leather by 1981, an engine rebuild in 2011, and an overhaul of the rear mechanicals including the suspension and fuel tank in 2013 are all notated in the report. There are related invoices on file from Ferrari specialists including being re-trimmed by Luppi around 15 years ago. The Ferrari presents well; the coachwork is nice, the interior is in very good condition, and the engine works well. Sold with a copy of its cancelled Italian registration document. Lot 41. Sold for $578,988. 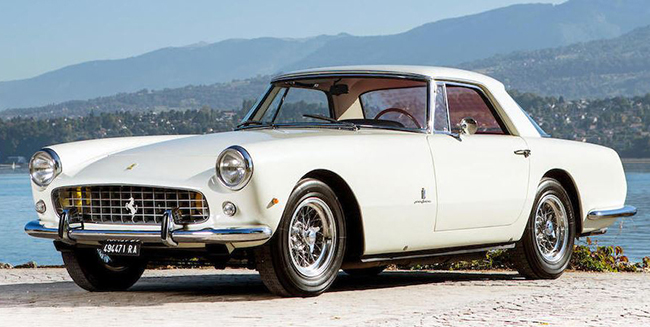 308 GTB ‘VETRORESINA’, S/N 19359 (1976). Red with black interior. Estimate $150,000 to $190,000. One family from new until the current owner purchased in 2014. It  has always remained in the Milan region of Italy. There are numerous entries in the registration document showing the car changing from company ownership to private ownership and then passing to another family member. Carefully re-commissioned, it now presents beautifully. Currently displaying 51,200 km. Serviced at 43,000 and 51,000 km. respectively. Described in excellent condition. Complete with tool roll, Italian registration documents, and service invoices. Lot 19. Not sold.