THE EVOLUTION OF OUR SPECIES

Like Darwin’s observations of living things, we can see a progressive development of the genus Ferrari as it adapted to changing environments over time.

Like Darwin’s observations of living things, we can see a progressive development of the genus Ferrari as it adapted to changing environments over time.

Most notable, of course, is the steady advance of dynamic technologies that have brought us from the 125 S to the LaFerrari. But everybody knows that, so let’s look at a subspecies, the Restaurata Ferrari.

Historic literature reveals that in the 1950s and 1960s alteration of the cars was commonplace.  Engines were routinely swapped amongst the factory racing cars and iconoclast owners put Chevrolet V8s into pontoon Testa Rossas at the drop of a hat. Crashed coupes were rebodied as roadsters, or vice-versa and a SWB became the Breadvan.

If an owner didn’t like the color of a street model, he changed it with little thought to any future consequence, and as more Ferraris joined the population, more adaptations took place. 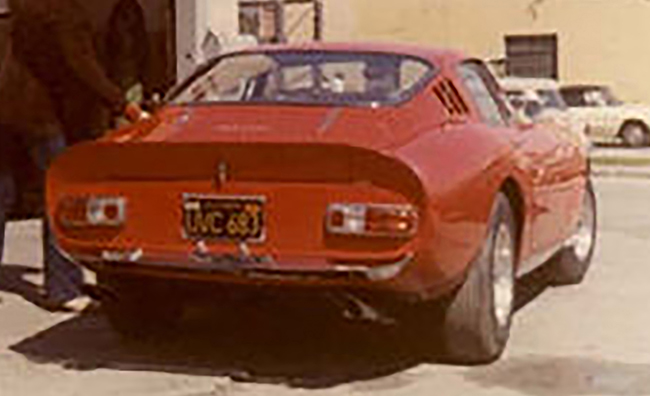 Period photo of a 275 GTB with modified spoiler, tailights and bumpers

By the time I started splicing the genes of my own cars in the early 1970s, practicalities had made certain changes predictable, like troublesome Marelli generators being replaced by easily-available (and cheap!) Motorola alternators.

If the exhaust system rusted apart, a local muffler shop could weld up a counterfeit copy and who cared about original-equipment-style hoses or Cheney clamps? When the turn-and-push ignition switch burned up its contacts, NAPA had a universal one that fit the hole in the dash. Ditto for cam cover nuts that had gotten corroded; the local Volvo dealer had near-identical cad-plated ones for about 12 cents apiece. I bought dozens of them.

But about that time of anything-goes, visionaries at FAF Motorcars began to offer replacement parts that were less generic and more Ferrari-centric. They put together things like kits to rebuild your original FISPA mechanical fuel pump instead of having to use a universal electric pump…and then a pressure regulator after the fire was out.

At the 1981 FCA National Meet in Ashville, NC, I observed that clean and functional wasn’t good enough anymore, and judges were starting to decree whether something was ‘original’, or not.

Within a few years, Ed Gilbertson founded the International Advisory Council for the Preservation of the Ferrari Automobile (IAC/PFA) as a way to standardize how Ferraris would be judged, based on originality.

The global Ferrari concours environment was changed dramatically and appreciation for originality spread to most of the other marques in the collector car jungle. But natural selection takes time, and many Ferrari owners were still content with ad hoc refurbishments of their cars with only casual concern about ‘correctness.’

The majority of restorations on Ferraris were still in the personal preference stage; green and blue cars were routinely painted red, air filter tops were chromed and what was expeditious often trumped originality.

Once Ed’s cataclysmic New World (Judging) Order took root, FCA-affiliated concours events focused on keeping the species’ DNA as pure as possible and discouraged those that had mutated.

Professional Ferrari restorers began to devote considerable research into what was correct for the cars under their care, supported by gurus such as Gerald Roush and Marcel Massini, who as historians, traced the cars’ backgrounds and the helixes of their makeup.

Thirty years ago, very few restorers took the time to research the Ferraris they were doing or attended international-level shows to further their knowledge about what was ‘right.’

Most paint and trim decisions were simply based on the car’s owner or shop manager’s preference with scant attention to authenticity. But as the IAC/PFA protocols became accepted and were recognized as a value-add, Ferrari owners began favoring the better-educated restorers.

Of course, not all Ferrari buffs are interested in concours events and initially shrugged off nit-picking comments about their cars’ shortcomings. But when they wanted to sell their cars, even to other non-show-oriented buyers, the message was becoming clear, if it isn’t correct, it’s worth less than one that is.

What was once a rarely thought-about aspect of Ferrari restoration, authenticity, became more universally appreciated. Actually, digging into the background of their Ferraris became an enjoyable adjunct to enjoying it dynamically, and many owners have embraced returning their cars to original specification, helped along with annual critiques by the IAC/PFA judges when their cars are shown.

As in all things, the effect trickled down from the iconic alpha models to the betas of the tribe. A Superfast was quickly expected to be true to its roots, but a 308 could get away with aftermarket wheels for a while.

Over the past fifteen years, judging credentials have been shown to enhance a Ferrari’s value; an award-winner conveys a sense of security that the car is less of a gamble and will be chosen over a similar car lacking official endorsement.

Consequently, a Platinum-level car is worth more than one awarded Silver in most buyers’ eyes and is usually easier to sell, too. It’s not too hard to bring a never-evaluated-but-pretty-good car up to Silver status, and then striving for Gold next year.  Platinum is tough; like raising a B to an A in your advanced chemistry class, but nevertheless is achieved by many.

In fact, the long-held IAC/PFA Platino standard of 95 points became so frequently-won, that the threshold was raised to 97 points in 2016!

It looks like Darwin was right; every species, even Restaurata Ferrari, adapts to the changing realities of its environment!