Marchionne, who took over running the company in 2014 along with being the top executive of Fiat Chrysler Automobiles, pushed Ferrari into hybrid technology and exploring an SUV model. He also has said that the exotic car maker would examine whether to bring back some of its famous marques, and he pushed production to record levels. Marchionne also planned to extend the company’s non-vehicle operations with much more Ferrari-branded clothing and amusement parks. He was supposed to outline a five-year plan for the company in September that would take it through his planned retirement in 2021.

New CEO Louis Camilleri, who had been a Ferrari board member since 2015, has remained silent on the company’s future strategy and is not expected to make any major changes, at least initially. But all top company executives like to leave their mark.

Marchionne’s legacy at Ferrari is mixed, but there’s no denying the company is in its strongest financial position ever. He took over as chairman in 2014, ousting longtime leader Luca de Montezemolo, and became CEO in 2016 after Amedeo Felisa retired. Marchionne was successful in spinning off Ferrari from Fiat Chrysler in 2015 in an initial public offering, and the stock price has dramatically outperformed the overall market since that time. The company has also reported record sales and profits in the last three years.

However, the boost in production has upset some longtime Ferrari customers, who fear that the scarcity of the brand – and their cars – has lessened. And Scuderia Ferrari has not won a constructor’s championship in Formula One since 2008, and one of its drivers has not won the world championship since 2007. Some tifosi also chafed that his other job of running Fiat Chrysler took him away from completely focusing on Ferrari.

Marchionne was born in Chieti, Italy, in 1952, but he moved to Toronto when he was 13 and studied at the University of Toronto before earning an undergraduate degree in 1979 and an MBA in 1985 from the University of Windsor. He also received a law degree from York University in 1983. His first job out of college was as an accountant and tax specialist for Deloitte & Touche in Canada, but in 1985 he entered the corporate world when he became group controller and director of corporate development for Lawson Mardon Group.

He was chief executive officer and managing director of Swiss-based SGS S.A., which provides inspection, verification, testing and certification services, when his success in turning around that company’s performance attracted the interest of the Agnelli family that controls Fiat. Marchionne was elected to the Fiat board of directors in 2003 and became CEO in 2004 after the death of patriarch Gianni Agnelli.

At the time, Fiat was reeling from losses and an ill-fated relationship with General Motors. Marchionne ended its deal to manufacture engines and transmissions in Europe and Latin America with GM in 2005, getting the American car maker to pay Fiat $2 billion. Marchionne returned the company to profitability and expanded its revenue more than three-fold. In 2009 – the year he convinced the U.S. government to allow Fiat to buy Chrysler – the company reported a loss of $848 million on $32.7 billion in sales. Last year, it had $110.7 billion in revenue and a profit of $3.5 billion. He also eliminated more than $13 billion from Fiat’s balance sheet. 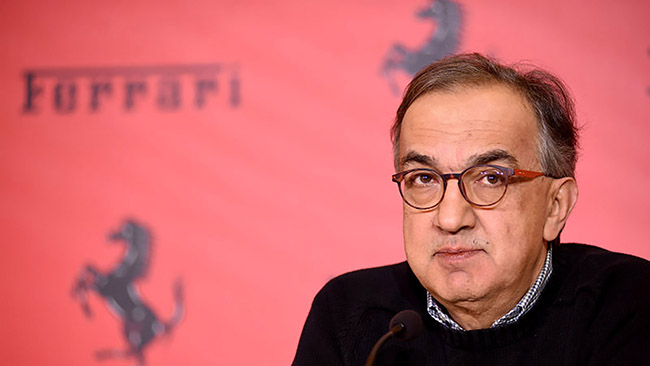 “Sergio has always made a difference, wherever his work took him and in the lives of so very many people,” said John Elkann, the grandson of Gianni Agnelli who is now Ferrari’s chairman, when Marchionne became ill in July. “Today, that difference can be seen in the culture that he introduced in all the companies he has led, a culture that has become an integral part of each and every one of them.”

Marchionne was known as a workaholic, and for his attire – he often wore black pants and a cashmere sweater. He attended auto shows around the globe to talk about Fiat and Ferrari, and had become an important voice in Formula One politics in recent years, threatening to take Ferrari out of competition if the FIA didn’t change some of its proposed rules. Among his personal cars were a black Ferrari Enzo and a 599 GTB, which he crashed in 2007 in Switzerland.

Part of Marchionne’s Fiat overhaul focused on Ferrari. In 2005, he announced that Maserati, then owned by Ferrari, would be transferred to Fiat. And increasingly, he and Montezemolo, who had joined the company in 1973 and worked for Enzo Ferrari, clashed over the future direction of the Maranello-based company. Montezemolo advocated for keeping production low to maintain scarcity while Marchionne wanted to push production to more than 10,000.

Since Marchionne ran Ferrari’s parent company, he won the battle, and Montezemolo left Ferrari in 2014 and Marchionne became its chairman. At a press conference held to announce the news, Marchionne quipped “As you can see, I don’t listen to him,” when asked about whether he took clothing advice from the well-dressed Montezemolo. The relationship remained tense until the end. Montezemolo recently tweaked Marchionne for lamenting about Ferrari’s lack of titles in Formula One. 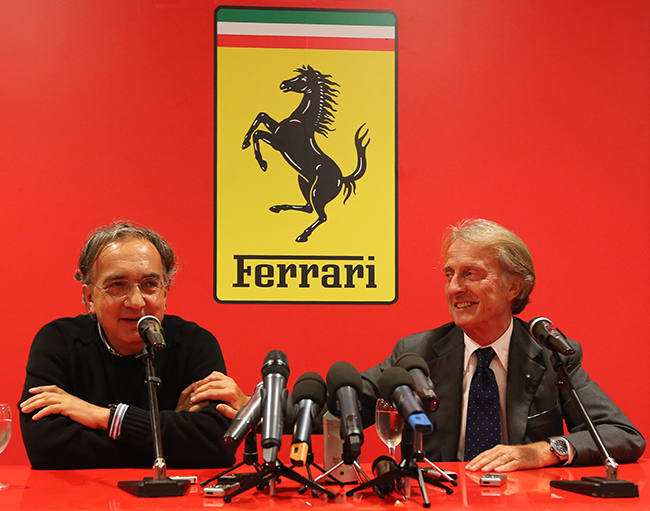 The next year, Ferrari was spun off from Fiat in a deal that gave the Agnelli family a 32 percent ownership in Ferrari. Piero Ferrari, Enzo’s son, holds a 10 percent stake. The stock, which went public at $50 per share, is now above $130. (Editor’s note: See Ferrari Market Letter Vol. 40, No. 23, where this writer recommended against buying the stock.)

If Ferrari watchers want to look for clues about Marchionne’s plans – and whether Camilleri may follow through anything – then they should examine what the former CEO said during the company’s first quarter earnings conference call in May. During the one-hour talk, Marchionne discussed Ferrari’s strategy, as well as his thoughts about the company’s performance.

Here are some snippets:

• The Pista’s attraction: “I’ve got people not that sort of are begging to get put on the list. The car is completely sold out. It shows what happens when you end up finding the right set of stylistic and technical attributes and you price properly for the marketplace.”

• Ferrari’s pricing strategy: “I think we’re learning how to price, and I don’t mind admitted sort of ignorance on this issue because I think if I told you that we cracked the code on pricing, I’d be lying…I think the worst thing that could happen to us is that we end up mispricing and overpricing…I mean, overpriced products that need to be re-dimensioned have a very negative impact on brand.”

• What Ferrari’s focus should be: “And I think there’s a lot of work that needs to be done in terms of maintaining, in terms of developing and maintaining the uniqueness of Ferrari going forward, including volumes and margin generation and the expansion of profit.”

• Hybrid: “Certainly by 2022, the completion of this plan, I would expect that nearly all of the offerings that Ferrari will make will embed some level of hybrid structure and powertrains. But I think we need to be careful. There are still some customers of ours and some products that I think will require pure combustion.”

• Formula One performance in 2018: “The car today is probably the most promising F1 car that Ferrari has had since I’ve been here since 2014. It is competitive. I think it is competitive in a variety of circumstances. The thing that I find even more encouraging is the way in which both of our drivers have engaged.”

As head of Fiat, Marchionne successfully returned Alfa Romeo to Formula One, and one of his dreams was for Maserati to return to grand prix races as well. Maserati last raced in 1960.

As for Ferrari, Marchionne has said it could sell more than 10,000 cars by 2025. In 2017, he said that the company would spent about 30 months to decide on SUV production, and he referred to Ferrari’s plans there as an “FUV.” In a 2017 conference call, he said an SUV would “probably happen.”

Those plans – and many others – now fall to Camilleri, who unlike Marchionne can focus solely on Ferrari. He’s spent most of his career in the cigarette and food business and most recently was chairman of Philip Morris International Inc., which happens to be one of Ferrari’s main Formula One sponsors. He has no auto industry experience. Then again, neither did Marchionne back in 2004.