DINO 206 GT, S/N 00184 (1968). Red with black leather. Estimate $525,000 to $625,000. Visually maintained, largely original, 3 condition. Not sold at hammer bid of $450,000. Cromodora alloy wheels, Michelin XWX tires, leather rim steering wheel (original included). Two owners from new, 29,041 km. Decent older repaint, wheel wells painted over old undercoat. Orderly, clean and dry but not restored engine compartment. Scratched dashtop and instrument panel with slightly foggy gauge lenses. Worn and creased original upholstery. Not fully restored but good enough to drive with pride. Despite having fifteen fewer horses than the successor Dino 246 GT, the aluminum bodied 206 GT is lighter and even more agile. This car with its limited Ferrari mechanic ownership history is highly original, yet wasn’t valued for originality in the bidding, which was reserved and highly conservative. It would not be expensive at its low estimate. Lot # 42. Worldwide Auctioneers.

DINO 246 GTS, S/N 05686 (1973). Rosso Chiaro with tan, black leather. Estimate $450,000 to $550,000. Recent restoration, 2 condition. Hammered sold at $500,000 plus commission of 11 percent = final price of $555,000. Chairs and flares, Campagnolo wheels, Michelin XWX tires, Ansa exhaust, MOMO leather-wrapped steering wheel, Becker Mexico cassette stereo, air conditioning, power windows. Full mechanical restoration with engine rebuild in 2017, and repaint in 2005. Older but very good cosmetics with no needs and a very good interior. This car ticks all the right boxes for a Dino. A massive price, even one with chairs and flares, but this result wasn’t just a fluke as RM Sotheby’s got half a million dollars for their own chairs and flares 246 GT over in Phoenix. Lot # 158. Gooding & Company.

288 GTO, VIN ZFFPA16B000056761 (1985). Red with black leather, red cloth inserts. Estimate $3.2 million to $3.6 million. Unrestored original, 2 condition. Hammered sold at $3.05 million plus commission of 10.16 percent = final price of $3.36 million. Sony CD stereo, air conditioning, power windows, 5-spoke Speedline factory modular wheels, Sumitomo tires, SF shields. U.S. delivered, now with 2,875 miles and like new aside from some polishing scratches. The upholstery is unblemished, the engine compartment is clean and orderly and is represented to have just had a belt service. Based on historic 288 GTO auction transactions this is an expensive outlier due partially to the modest mileage and partially to its U.S. delivery. Lot # 149. RM Sotheby’s.

328 GTS, VIN ZFFWA20B000059995 (1985). Rosso Corsa with black leather. Unrestored original, 3+ condition. Hammered sold at $62,000 plus commission of 10 percent = final price of $68,200. Alpine cassette stereo, tools and jack. The paint is very good but there are some chips and scratches on the nose, hood and rear. The interior is good with some light wear on the driver’s seat. The wheels and tires are in good condition. The wheels have a few scratches but no real scarring. Well maintained with a recent service and showing 26,768 miles. This car sold for $57,200 at Worldwide Scottsdale 2017, then sold here last year for $83,600. This in-between result is more realistic to the car’s actual value. Lot # 1027. Barrett-Jackson.

328 GTB, VIN ZFFXA19A0H0068647 (1987). White with crema leather. Estimate $140,000 to $180,000. Unrestored original, 3+ condition. Hammered sold at $85,000 plus commission of 12 percent = final price of $95,200. Blaupunkt cassette stereo, air conditioning, BFG tires, power windows. Represented as 15,061 miles from new with documentation from service records and CarFax. Worn and lightly soiled original upholstery. Good original paint. Orderly unrestored engine compartment. A quality, gently used driver said to have had a belt service 1,000 miles ago. Bought here with a moderate but significant premium on the order of $10,000 for its originality and preservation, this 328 GTB promises to be a rewarding car to own and drive as long as the thousand miles since its belt service doesn’t mean it has been five years of sitting largely dormant since the belts were replaced. Details, details. Lot # 043. Bonhams.

208 GTS TURBO, VIN ZFFZA28B000079700 (1988). Red with crema leather. Estimate $100,000 to $125,000. Visually maintained, largely original, 2- condition. Hammered sold at $90,000 plus commission of 12 percent = final price of $100,800. Pioneer CD stereo, air conditioning, 5-spoke alloy wheels, Pirelli tires. Very good paint and original interior with little use evident. Good engine compartment. Not fresh but gives good account of itself and its history. A strange beast, rare in the U.S. because it was built to get around Italian taxation of cars with more than 2 liters displacement. The extra complication of the turbocharger is not, in this case, offset by a performance advantage and there’s no reason for it to bring more than a 308 in similar condition, which this result is. Lot # 119. RM Sotheby’s.

328 GTS, VIN ZFFXA20AXK0081609 (1989). Azzurro Metallizzato Ferro with red leather. Estimate $140,000 to $180,000. Unrestored original, 2 condition. Hammered sold at $95,000 plus commission of 12 percent = final price of $106,400. 5-spoke alloy wheels, Eagle Sport tires, air conditioning, power windows, power mirrors, Sony cassette stereo, ABS. Represented as 19,145 miles from new and nothing about this 328 GTS suggests that is anything but correct. Good original paint and barely used upholstery, like new underbody. Platinum at Cavallino Classic in 2015 and probably would be judged accordingly today. Reported sold at Bonhams Quail Lodge in 2013 for $68,200, the result here reflects a material premium for originality and preservation, as well as the dramatic livery and bright, lipstick red, upholstery. It has eyeball appeal. Lot # 116. Gooding & Company.

328 GTS, VIN ZFFXA20A5K0081887 (1989). Rosso Corsa with tan leather. Estimate $130,000 to $160,000. Unrestored original, 2- condition. Hammered sold at $110,000 plus commission of 12 percent = final price of $123,200. Blaupunkt Tucson radio, original spare, books and tools. Excellent paint and trim with some very light detail scratches likely due to auction prep that should remove easily. There is one scuff under the passenger’s side mirror that may take more effort. Lenses and wheels are excellent. The interior presents as near new and the odometer reads 18,144 miles. The driver’s seat has very light signs of sitting, and the carpet has notable wear near the parking brake lever. It was serviced in 2016. This is a strong price for a 328. Not as strong as the $165,000 it sold for at Gooding’s Pebble Beach auction in 2016, but prices have come down a bit since then and its most recent service (in 2016) is about due to be done again which will make up much of the difference between the two results. Lot # 049. Gooding & Company.

F355 SPIDER, VIN ZFFXR48A9T0104887 (1996). Giallo Modena with black leather.  Estimate $60,000 to $80,000. Unrestored original, 3+ condition. Hammered sold at $70,000 plus commission of 12 percent = final price of $78,400. Ferrari alloy wheels, SF shields, power windows, climate control, Pioneer CD stereo, books and tools. 17,427 miles from new, major service in 2017. Very good original paint. The engine compartment looks good on top but has road grime below. The seats, particularly the driver’s, are surface creased and have areas of discoloration, a bit more than just patina, which deserves attention and could have been done when the “sticky buttons” were corrected. This is a surprisingly good result for a used F355 Spider, even in Giallo Modena. Perhaps the bidders were sucked into the trap of the catalog’s description of “the desirable six-speed manual transmission”. In the F355 the 6-speed was standard and the paddle shift F1 gearbox was the hot, and more rare, option. This result isn’t irrational, just full retail. Lot # 280. RM Sotheby’s.

F355 SPIDER, VIN ZFFXR48A6W0110876 (1998). Rosso Corsa with tan leather. Unrestored original, 3+ condition. Hammered sold at $58,000 plus commission of 10 percent = final price of $63,800. Ferrari alloy wheels, air conditioning, JVC stereo. Good original paint, worn original upholstery, particularly the driver’s seat bolster and cushion. The top of the engine compartment has been cleaned up, but not the nether reaches. One small chip by the engine hatch touched up with the wrong color. A sound driver but with no service history. A respectable used 355 Spider in an attractive (i.e., not red) color for a reasonable used Ferrari price. Lot # 1617. Barrett-Jackson.

360 MODENA, VIN ZFFYS51A4X0116590 (1999). Rosso Corsa with tan leather. Estimate $60,000 to $90,000. Unrestored original, 3+ condition. Hammered sold at $78,000 plus commission of 12 percent = final price of $87,360. Clear bra on the nose, Michelin tires, factory stereo, books, tools, car cover. First year 360. Several small chips behind the clear bra on the nose. Several more on the mirrors. Some discoloration on the transmission tunnel and some wear to the driver’s seat. Light curb rash on the right front wheel. Originally sold in Canada, but soon went to the States and had its speedo changed to miles. Now represented with 9,400 miles. Desirable gearbox and good colors, but this is a used car with no recent service represented. A very modest result given the huge premium that a 6-speed carries on late-model Ferraris and this car’s low mileage, but its condition, history and lack of service records really worked against it here. The new owner got it at a price that leaves room for a major service, as it should have. Lot # 098. Bonhams. 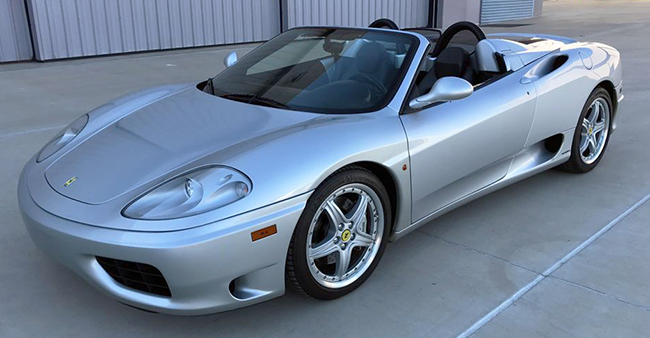 360 SPIDER, VIN ZFFYT53A340137923 (2004). Dark blue with tan leather, black bars. Unrestored original, 2- condition. Hammered sold at $63,000 plus commission of 10 percent = final price of $69,300. Power Daytona seats, shields, Ferrari modular wheels, red calipers. Good original paint with no nose chips, very good, nearly like new, interior and top except for a scuffed plastic rear window. Both mirrors have small touched-up stone chips. Clear headlight covers. A well maintained all-original car in an attractive livery, but mileage and service history are unknown. Said to be one owner so it’s not too much of a stretch to expect the mileage to be indicated. In the absence of such information the bidders wisely declined to stretch to own it, with this modest price the result. Lot # 1616. Barrett-Jackson.

CHALLENGE STRADALE, VIN ZFFDU57A440138536 (2004). Blu Le Mans with blue, gray interior. Unrestored original, 2- condition. Hammered sold at $150,000 plus commission of 10 percent = final price of $165,000. Yellow calipers, window sticker, books and tools. Detail swirled paint could use some attention. Chips on the nose. The wheels have a few scratches, and the trim around windows is a bit wavy. The headlight lenses are a bit faded. Very good special order gray and blue interior. Documented service history from new, a $30,000 timing belt service was performed 800 miles ago, and total mileage is 9,885. Reported bid to $161,500 at Russo & Steele here in Scottsdale last year. Another year older and worth $11,500 less at the hammer bid. Lot # 1360. Barrett-Jackson. 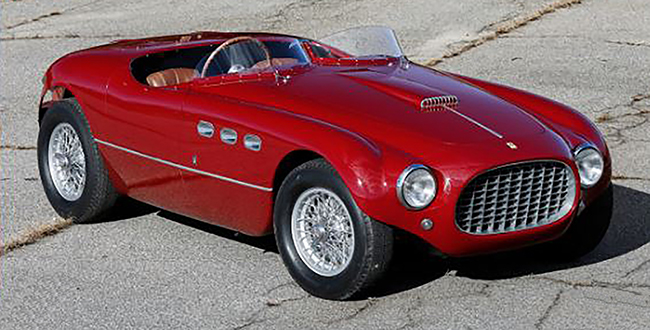 250 MM VIGNALE SPYDER, S/N 0348 MM (1953). Rosso Corsa with brown leather. Estimate $5.5 million to $6.5 million. Competition restoration, 2- condition. Hammered sold at $4.9 million plus commission of 10.10 percent = final price of $5.39 million. RHD. Dual wraparound Plexiglas windscreens, outside laced Borrani wire wheels, woodrim steering wheel with finger grip buttons, Carello headlights, electric cooling fan, aircraft-style belts. It is one of the prettiest and most compact Ferrari competition cars of the era, with a cutaway front valence for brake cooling, three oval portholes in the front fenders, rear fender air extractor vents and recessed taillights that would be called “Frenched” on a California Custom. Sold new to MOMO Corporation, it was raced extensively. It’s not pristine, but it is meticulously maintained in near-showroom condition, a wonderful time capsule car that has never lost its identity and is eligible for the most desirable and exclusive events. Offered by Gooding at Pebble Beach in 2004 where it was reported bid to $1.6 million and sold later at an undisclosed price. There are eighteen documented owners in this 250 MM’s history  and it is a delectable, choice, bought here for a price commensurate with its SCCA history, exemplary condition and eligibility for just about any exclusive tour or event its owner wants to experience. Lot # 042. Gooding & Company.

F430 GTC MICHELOTTO, S/N 2604. Dark blue with black cloth. Estimate $425,000 to $475,000. Competition car, 2 condition. Hammered sold at $313,636 plus commission of 11.59 percent = final price of $350,000. Red calipers, centerlock alloy wheels, yellow headlights and driving lights, full roll cage, splitter, adjustable wing, full roll cage, fire system, two OMP seats, racing harnesses, data acquisition, quick fuel and oil systems, 24-hour lighting. One of about 53 built by Michelotto but never raced and in as-delivered pristine condition. Sold at Barrett-Jackson in 2015 for $300,000 and apparently unused since, this transaction closed post-block with this result. It will be a glorious track day car but its condition and preservation suggest it will never see the track where the vicissitudes of stone chips and trying too hard would sully its preservation. Lot # 276. RM Sotheby’s.