250 GT ELLENA, High Roof, S/N 0861 GT (1958). Black with green leather. Estimate $625,000 to $725,000. Fifty years of documented ownership by three private caretakers, including a 32-year period of care. Sold new to Modena resident Antonio Fiorani. A year later it was imported to the United States by Luigi Chinetti, and by 1969 it was owned by Fitzgerald Motors, a dealer based in Evanston, Illinois. In January 1970, it was purchased by Bradley Balles of Dallas, Texas, and he retained possession for more than three decades. Mr. Balles sold the Ferrari in February 2002 to Jack Boxstrom. Boxstrom utilized the car at a number of premium touring and exhibition events, including 2003 Amelia Island Concours d’Elegance, the Ferrari & Maserati Festival and Shell Historic Challenge races at Lime Rock and the 2008 Colorado Grand. In October 2012, Boxstrom sold the Ferrari. A significant restoration began with a two-year cosmetic and mechanical refurbishment. Most recently, in the spring of 2020, the Ellena received an inspection and scheduled tune-up, including the fitment of a new larger battery and a full top-to-bottom detail. Lot 168. Sold for $671,000.

550 BARCHETTA, VIN ZFFZR52A010124353 (2001). Nero with black leather interior. Estimate $280,000 to $320,000. Number 375 of 448 examples built. Black carpets with medium sized carbon fiber racing seats with Alcantara inserts. Red calipers, fire extinguisher, and black leather covers for the roll bar. All recommended mechanical servicing, plus the installation of exhaust system with Tubi mufflers, a replacement Becker radio, a new tonneau cover, and interior refurbishment including sticky buttons and knobs. Alcantara seat inserts were replaced with black leather supplied by the factory. A unique feature is the inclusion of a aftermarket hardtop. The fitment appears factory-correct and the roof is considered safe to use up to the top speed. Factory tools, owner’s manuals, tire inflator, two sets of keys and a binder of receipts dating to 2008. 14,681 miles. Lot 249. Sold for $308,000.

575M MARANELLO, VIN ZFFBV55A220129435 (2002). Giallo Modena with black leather. Estimate $225,000 to $275,000. Delivered new in Canada with instruments in kilometers and equipped with the Fiorano handling package. Daytona seats and Scuderia shields. Acquired in early 2012 by its second owner, another Ontario collector who kept the car through late 2013. In August 2015, it was sold to a California-based collector. Currently displaying 17,222 kilometers (10,701 miles). Fitted with 19” modular wheels and Tubi exhaust, the original factory wheels and exhaust are included. Platinum Award at the 2017 Cavallino Classic. Lot 315. Sold at $247,500. 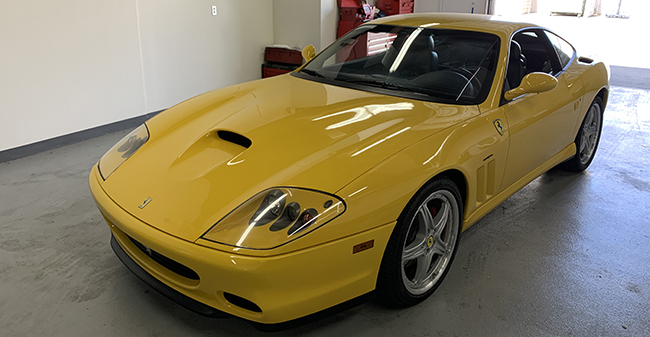 ENZO FERRARI, VIN ZFFCW56A030133033 (2003). Rosso corsa with black and red interior. Estimate $2.6 million to $2.9 million. Delivered by Ferrari of San Francisco to its first owner st 2003 who kept the Enzo as part of his collection until 2018. The car was used only on occasion and was regularly serviced by Ferrari of San Francisco. Service receipts document its proper care and mileage from new. Recently inspected in September 2017 and had a major 25,000-mile service performed in 2015, both by Ferrari of San Francisco. The current owner acquired the Enzo in 2018 and it has been driven less than 1,250 miles since new. Optioned with two-tone racing seats with red 3D cloth inserts. Complete with factory accessories, including the tool kit, owner’s manuals in pouch, and window sticker. Lot 294. Sold for $2.64 million.

308 GT4, S/N 10572 (1975). Rosso Chiaro with black leather. Estimate $70,000 to $90,000. No reserve. Many years of California-based ownership, as well as a recent round of upgrades to off-road ‘Safari’ specifications. Electric windows, air conditioning, and rear parcel shelf rather than the standard backseat. In 2018 it was owned by an enthusiast in the San Francisco Bay area. After being acquired by the consignor, the 308 was treated to thorough mechanical attention including a timing belt service, filters, and spark plugs. The GT4 also underwent off-road modifications that began with raising the suspension with longer components used in the 308 GTB. A custom front steel bumper was installed along with a caged rear bumper, fiberglass-reinforced rear mud flaps, and quad Hella driving lamps. The rear decklid and window surround were refinished in satin black, and the grille vents were powder coated. Custom Corsa Velocita 15” steel wheels with Michelin XWX tires, and a CB radio with a whip antenna. The seats were reupholstered with black leather and corduroy inserts while the interior was further upgraded with aluminum pedals, Repa four-point harnesses, leather luggage straps, and a fire extinguisher. Lot 171. Sold for $57,200.

288 GTO, VIN ZFFPA16B000055223 (1984). Red with black leather. Estimate $2.2 million to $2.4 million. Optioned with air conditioning and power windows. Purchased new by collector Hartmut Ibing. However, just nine days later while parked in a hotel garage in Cannes it was stolen. Quickly resold, it moved from France to Germany and then shipped to the United States. Delivered to a car dealer in Phoenix, who purchased the car unaware that it had been unlawfully acquired. Fortunately, the insurance company tracked the car down and brought it back Germany. It was sent it back to Maranello to be checked over. It had been driven 13,340 km by 1997 and would remain in Ibing’s ownership until 2001. Later that year, it was sold and shipped to Sherwood, Wisconsin. Upon import, federalization was by JK Technologies. Notably, the speedometer face was changed to MPH, though the odometer was left as-is and continues to read in the original kilometers. The new owner put a few thousand miles on the car, as well as attending a handful of events with the Ferrari Club of America. Unfortunately, just prior to selling the car to the current owner it was involved in a minor accident resulting in slight damage to the car’s front valance. Motion Products of Neenah, Wisconsin, repaired and repainted the original spoiler. December 2010 it was sold to the third owner. After his purchase, a timing belt service was completed and continues to be maintained by Motion Products. Exhibited at the 2018 Cavallino Classic. Accompanied by owner’s manuals, two sets of keys, as well as a tool kit and jack, and service invoices. Lot 279. Sold for $2.31 million.