365 GTB/4, S/N 13183 (1970). Rosso Chiaro with nero leather. Estimate €550,000 to €650,000. Plexiglas nose, power windows, radio, knock-off Cromodora alloy wheels and factory air-conditioning. It would remain in its native Italy until at least 1973. At some point thereafter, it was exported to the U.S. and noted as being in New York by 1979. Offered in 1994. Ferrari Market Letter ads described it as ‘365 GTB/4, S/N 13183 (1970 Euro prod.). Red with tan interior. Plexiglas nose, Borrani wire wheels, factory a/c. Same owner since 1982. 38,409 miles. Extremely nice and original.’ Another Ferrari Market Letter ad shows the car offered in California in April/May 1995; then sold to a collector in Japan later that year. Boasting an older restoration, the car received a recent cosmetic freshening and is presented today in its as-delivered color combination. Lot 268. Sold for €635,000.

512 BBi, VIN ZFFJA09B000039723 (1981). Argento with black leather and gray cloth interior. Estimate €200,000 to €280,000. Delivered new to Perugia, Italy, in 1982, and remained there for roughly the first nine years of its life and is noted as being serviced in Perugia at 30,000 km in October of 1991. Later in the 1990s, it passed to an owner in Switzerland. Chassis no. 39723 passed through two German owners prior to its acquisition by its third and current German owner, who purchased the vehicle in 2005. The consignor notes that it has been regularly used and enjoyed over the course of the last 14 years, accumulating some 4,000 km since his purchase. Only serviced by authorized Ferrari dealers during this time; last serviced in 2015 at Ferrari Eberlein. Becker Grand Prix radio with cassette player. Classiche certification, confirming it retains its original engine and gearbox, and is finished in its original color combination. Lot 229. €190,000.

400i AUTOMATIC, VIN ZFFEB07S000049825 (1984). Marrone metallic with crema interior. Estimate €75,000 to €100,000. NO RESERVE. Sold new and remained in Switzerland until 2014 and was purchased by the current owner that year. Regularly driven and always serviced by Ferrari-authorized mechanics, its last major service was carried out in 2014. The 58,551 km showing are original and the car is accompanied by an extensive folder of documentation. Classiche certification, confirming that it retains its original engine and gearbox, and is finished in its original colors. Lot 227. Sold for €56,350.

TESTAROSSA, VIN ZFFTA17B00060227 (1985). Argento with nero interior. Estimate €125,000 to €150,000. This early and desirable ‘Monospecchio’ (single-mirror) presents beautifully throughout in largely original condition, clearly having been very well kept since new. Delivered by Sa.Mo.Car of Rome to its first owner, who kept it for four years before selling it to the owner of a specialized Ferrari garage, who kept and maintained the car by himself until 2017, when it was acquired by the current and third owner. Lot 342. Not sold, sold after auction.

DINO 246 GT, S/N 00840 (1970). Blu Sera metallizzato with black leather. Estimate €200,000 to €300,000. NO RESERVE.  Sold new in June of 1970 by Italcar in Turin, Italy. In 1975 it was shipped to Australia, where it was changed from its original LHD configuration to RHD in order to drive legally on the roads of that country. The Dino remained in Australia until November 1998 when it was exported to the UK. In 2007 it was passed to a Belgium dealer, then to a German dealer and then to a private German collector in 2010. At some point, the car was repainted red and was converted back to LHD, although the exact date of the conversion is not known. The Dino’s current owner acquired the car in 2013 through a Dutch dealer. The Dino was treated to a high-quality restoration that included stripping the car’s body to bare metal and painting it back to Blu Sera Metallizato, just as it left the factory. According to its current owner, it is properly sorted, ready to be enjoyed and an absolute pleasure to drive. Lot 267. €331,250.

F430 SPIDER, VIN ZFFEZ59B000156792 (2007). Bianco Avus with nero leather. Estimate €120,000 to €160,000. Daytona-style seats with white stitching, carbon fiber trims from the factory, it presents in fine condition having covered just under 37,000 km. Upgraded exhaust system. The service booklet shows five stamps, all at Ferrari-approved specialists, with its most recent service being in July 2018 at Cavallari Motors of Monaco, since which the car has covered just 500 km. Accompanied by its full suite of owner’s manuals, service book and tool kit.  Lot 310. Sold for €120,750.

430 SCUDERIA, VIN ZFFKZ64B000159175 (2008). Giallo Modena with nero interior. Estimate €140,000 to €160,000. NO RESERVE. Delivered to its first French owner through Modena Sport of Toulouse in March 2008. Racing stripe in Grigio Corsa and yellow calipers. Nero seats are contrasted by yellow stitching and a yellow tachometer, whilst the trims are carbon fiber throughout. Always expertly cared for by Ferrari main dealers, with a most recent major service by specialist Charles Pozzi of Paris in January 2019. Lot 239. Sold for €155,250. 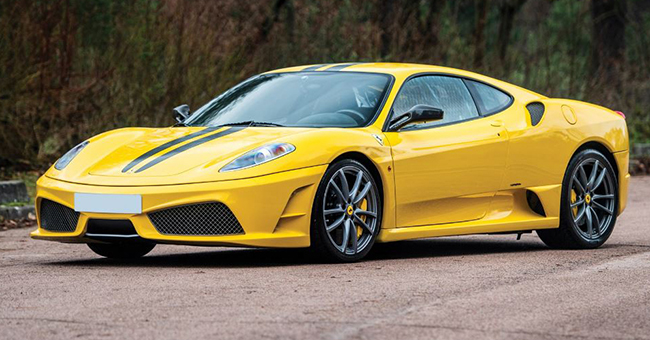 CALIFORNIA T, VIN ZFF77XJB000226893 (2017). Rosso Corsa. Estimate €275,000 to €300,000. 70th Anniversary livery #68. Nero roof, wing mirrors and door handles, and the wheels are painted matte black. Inside, the dashboard and steering wheel are covered in black leather while the seats and lower dashboard wear a high-quality Siam red leather with a fine grain designed to recall the bucket seats in the LaFerrari. The carpets are black Mycro Prestige, a high-tech material, which was developed specifically for Ferrari that is soft to the touch. Carbon fiber trim can be found throughout the interior, including on the shifter paddles and the steering wheel. Delivered new to its first and only owner through Scuderia Monte Carlo, it has only accumulated delivery mileage since new and remains in virtually as-new condition throughout. Lot 273. Not sold.