The Ferrari Market Letter has been collecting information about Ferraris for nearly fifty years. See what we collect and how you can help.

The Ferrari Market Letter has been collecting information about Ferraris for nearly fifty years. Founder Gerald Roush began recording serial number data from advertisements, Road and Track, Ferrari meets and any other source he could find.

Up to 1972 total Ferrari production numbers were less than 10,000 cars. The task to identify, locate and develop a historical archive of each individual car didn’t seem like an impossible task.

The recording of each sighting was dutifully typed onto a 5x7 index card and filed. Information on ownership, colors and mileage was collected. The archival retrieval system consisted of remembering who owned which car, what it looked like and other particulars from directly examining each one.

A file cabinet held letters, photos and magazine articles cut from various sources. Each folder labeled with the serial number and filed away.

While working with the Ferrari club and a new company in Atlanta called FAF Motorcars the concept of providing a newsletter of Ferraris for sale throughout the United States was born. This would allow the gathering of even more information to be placed upon the ever growing stack of 5x7 cards.

Fortunately the 5x7 cards are gone. The data has been accurately transcribed into an electronic database with all the capability to sort, find and track an ever-growing amount of information.

Today we still add to that database. In addition, the ability to scan documents has greatly expanded. What used to be put on a copy machine can now be saved with a color scanner in great detail nearly as good as the original document.

In today’s world we save information on each Ferrari made in the electronic database, in paper file cabinets (that now number 10 four-drawer over-stuffed cabinets) and in what we call photo files. 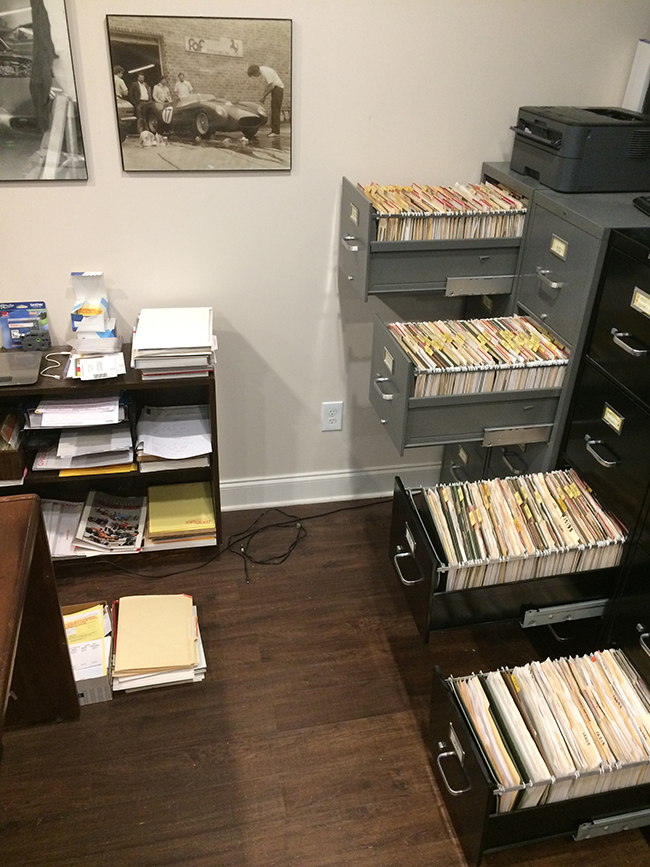 Photo files are by serial number and contain scans of photos, letters and any other information collected. Many times customers send us photos of their car or we take photos at various events. These are saved to be able to provide a recorded history of each Ferrari.

Often, we get calls inquiring about the history of a Ferrari or to see if we have any paperwork that we could provide. We have much, but not all of the history of every Ferrari made.

Ferrari has made roughly 190,000 Ferraris (if every serial number is used) since 1948. With production pushing 10,000 cars each year and possibly even more soon, that adds up to a lot of history to track.

This brings me to one call I received recently. The gentleman was looking for the history on his late model Ferrari. It seems he purchased the car several years earlier and his house, garage and business, along with all paperwork, was consumed in the California wildfires.

What was left of his garage exposed the skeleton of what once was a cherished car collection. Thank goodness for insurance; but wait, the insurance company wanted the client to prove he owned the Ferrari.

It seems he purchased the car and never transferred the title into his name. A classic ‘open title’ situation. No title transfer, no taxes paid, no tag, no proof of ownership, other than the now non-existent bill of sale…

Could we tell him who the original owner was?

We had nothing. We knew the serial number was a legitimate USA Ferrari, but nothing past that. The original owner didn’t let us know he owned the car. That owner never took the car to any show or meet where it could have bounced off our radar.

In addition, the now-desperate new owner never let us know he had purchased the car. Since it spent its life hidden away in the garage, and again, not driven to shows and events, we never had the opportunity to record who the owner was.

Somewhere, in another state, the DMV has a title in an unknown man’s name. As long as the original owner can be found and he applies for a replacement title, signs the new title and forwards it, it should be a snap to get the insurance company to pay for the now crispy Ferrari.

Provided the name can be found, and he is still alive, the transaction should be easy. Add in a deceased owner and the family may not be easy to deal with; the headache and cost could rapidly rise. A lot can happen in the eight years since the purchase.

The moral of the story is: if you don’t tell me you own the car and who you bought it from, how can I record that information to be able to give it back to you later?

What if he had dropped me an e-mail? What about sending me a scan of his title, even the one he didn’t transfer? I could have regurgitated that information back to him.

The Ferrari Market Letter has collected information on as many Ferraris as we can, but you could help also. We have been the Repository of Data for nearly fifty years, a trusted source of information. Why not yours?

Recently, I got an entire PDF of sales receipts, titles and letters from a late-fifties Ferrari. Much of this information was known to us, but not all, details matter. Now we can record the pages into the photo files and help complete the known history.

Although I don’t have the physical paper, I have the next best thing, a quality scan of the original. If something were to happen to the original file, say, a fire, flood or other unfortunate event, it could be reproduced from our archived files.

The scans are coded with the serial number and date, then a description of the image and the source. When placed into the folder all the scans sort in chronological order. This helps us create a picture history of each car.

We have gotten boxes of records from dealers who have gone out of business. Parts receipts and workorders are most common. Sometimes there have been sales receipts and checks. All are scanned and filed under an identifiable serial number. It still surprises me when I file a workorder and recognize my handwriting either under the parts column or in the service performed area.

Often a workorder can fill in missing information; owners name and mileage are a couple of areas that generate an entry into the electronic database, but there can be other tidbits found. License numbers help to identify photos and there are always engine internal numbers to collect.

Verifying mileage is a big question we often get. A good verifiable mileage history helps value and workorders help to establish that progression over time. What better way to be able to prove service on your Ferrari than to send a scan of your workorder to the Ferrari Market Letter? When you go to sell your car and can’t find all those pieces of paper, we will have the scans to send back to you.

Another area the scans can help is in identifying unknown Ferraris. I have been able to compare photographs against other known data to uncover mis-information. There was an entry in our racing database indicating a certain Vignale berlinetta participated at a particular race. Upon finding a photograph from that race it clearly showed the Ferrari in question was Touring bodied. It was a short investigation to reveal what serial number was really raced that day. History corrected.

Recently I found a photo of a Spyder California in race trim, unidentified. It was easy to find another photo of the car from a later race by matching details like the shape of the roll bar and decals. Sometimes even a dent in the nose can be used for positive identification.

In addition to the aforementioned data repositories we also have other database lists. The assembly data sheets that formerly could be requested from Ferrari but now can be part of the Classiche Certification package are in a Excel shreadsheet. Did you know the basic 3-liter 250 GT engine came in three levels of tune?

There is the normal street version with all stock parts. Then there is a customer high-performance version, most would call their 250 GT SWB to have a ‘Competition’ engine. Ferrari held back from the customers; he had another even higher performance engine that was used only by the factory or very deserving customers. These engines had components that the normal customer could not get.

This info comes though detailed analysis of many, many build sheets. Do we have a copy of yours?

Between Cathy and me, we spend nearly forty hours each week in the database. Whether it is auction reports, advertisements, sorting through old photographs, e-mails or old files we fill each and every day. In between we organize, produce and mail the Ferrari Market Letter to you.

Often, there seems to be a reluctance to give us information. The broker who calls with an inquiry, “What history can you give me on this car?” We ask “What do know about it? Where is it? Who owns it now?” The usual answer is “I don’t know any of that, tell me what you have.” Information is a two-way street. We are not going to take your ‘secret’ information and publish it in the next issue. Our integrity is higher than that.

I have a broker that sends me every car he sells, every car he knows that has changed hands, serial number, mileage, often photos. He has built up a credit he taps into every time he needs to. How great it would be if everybody did the same?

Sometimes it’s funny to be known for collecting information of Ferraris. When disputes arise or there are questions about any Ferrari, the phone lights up and desperate voices want to know if we have any information that can save the situation.

Why is that? The short answer is our honesty and integrity have been built up during fifty years of collecting information. If you supply confidential information we will keep it confidential. It is a big responsibility to be the Repository of Data. As Cathy and I say to each other all the time, if not the Ferrari Market Letter then who else?

My inbox is always open. Send scans of your paperwork and photos to: