Ferrari has used several different bodybuilders during its history. Stablimenti Farina, the forerunner of Pininfarina and Touring were two manufacturers that clothed the Ferrari chassis. Others like Vignale and Ghia were also used for their design and manufacturing capability.

Rick Carey and I have been playing this game for several years. His reports identify each car by the designer and builder. He adds this nomenclature to his descriptions, and I remove/change it.

We have had several discussions about whether his labeling should be kept, as is, or changed. I get the final word as to which description gets to grace the Ferrari Market Letter.

We thought we would either clear the air or muddy the waters with a more in-depth discussion of our respective points of view.

Ferrari has used several different bodybuilders during its history. Stablimenti Farina, the forerunner of Pininfarina and Touring were two manufacturers that clothed the Ferrari chassis. Others like Vignale and Ghia were also used for their design and manufacturing capability.

These carrozzerias would create most of the Ferrari designs in those incredibly early days of Ferrari. There would also be others, Zagato and Motto would also add their interpretation as design styling exercises or in response to customer preference. 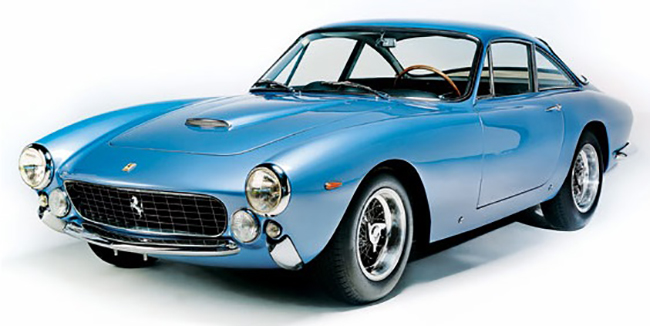 Ferrari did not make bodywork, Ferrari made chassis and engine. The mechanical components were the most important items about any Ferrari. Speed and reliability were important to Enzo. It would not matter what a car looked like as long as it would win.

This sounds somewhat cold and calculating and is only partially true, Ferrari was still an Italian and Italians have a sense of style and proportion that would not allow something ungainly or ugly to grace the chassis. If it were to go quickly, it must look fast. It must also be light; weight is the enemy of fast.

It must also be recognized the war had devastated the Italian economy and countryside and Ferrari was taking an ambitious step building his own car. Other companies were not much better off and while talent and workforce were plenty, resources were scarce.

Ferrari by necessity used the various body builders to spread production around. To fill the production schedule, contracts were given to several different houses and each was able to create their own interpretation of what a Ferrari should look like.

During these early days there was not much difference between competition and street cars. Competition cars had less creature comforts and anything not absolutely necessary was not installed while street cars had a bit more in upholstery and comfort built in.

Pininfarina first placed a body on a 212 Inter in late 1951. This may have been the wish from a customer who wanted something different. Remember this was still a time when whole-body customization was done. The result was a chance for Ferrari to see a completely new direction in styling.

By 1953 Ferrari production was getting larger than Touring and Ghia could handle. The main designers of Ferrari were Pininfarina and Vignale. These two companies began to form the shape and identity of Ferrari.

Ferrari placed his faith in Pininfarina to carry an identity forward and Vignale designs faded. From 1955 nearly every Ferrari body shape and design came from the house of Pininfarina.

Race cars get damaged and instead of returning each one to the original carrozzeria, Ferrari would send them to a local bodyshop. Sergio Scaglietti was repairing the various racing cars that Ferrari sent over for repairs. Scaglietti took the damaged cars and returned them back into pristine examples ready for the next race or back to the customer. Recreating a damaged fender was a short step from creating a whole car.

Scaglietti was tasked with making race cars. His pleasing lines worked well, and a series run of the 500 Mondial and 750 Monza helped cement the growing collaboration between Ferrari and Scaglietti.

In 1956 the situation looked like this: Pininfarina oversaw style and Scaglietti built racing cars. Pininfarina also built bodies but had undertaken an expansive improvement in their factory production facilities and was unable to accommodate Ferrari.

Pininfarina gave Boano the plans for the newest 250 GT body. The new racing 250 GT LWB Berlinetta was given to Scaglietti to build.

By 1957 Pininfarina now had the capacity to start Ferrari production again and the new 250 GT PF Coupe was designed and built.

Now back to the argument. Pininfarina designed most Ferrari automobiles at least up to the Enzo and while many models were built by Pininfarina the ones not built were assembled by Scaglietti.

I believe the place of manufacture, i.e. Pininfarina or Scaglietti, gives a better view into the inherent quality built into the Ferrari itself. Naming something a Pininfarina-Scaglietti 250 GT/L “Lusso” confuses where the car came from. The Pininfarina 365 GTC/4 is a much clearer description.

It’s a basic question in the term “coachwork by”: does credit go to the designer, to the carrozziere who executed the design, or should it be shared by both?

It’s not a tangled web solely related to Italians. In the States, Raymond Dietrich designed, both in his own name and for LeBaron, bodies for Packard and others that were built entirely independently by the companies or by contractors.

It’s of particular significance at Ferrari with the interplay of two legendary Italian coachbuilding maestros, Pinin Farina and Sergio Scaglietti.

As the tangled design and industrial histories of Italian coachbuilders and Ferrari has evolved, however, the distinction has become less clear, both in FML and among observers – including auction companies’ catalogers.

That controversy hasn’t been apparent to FML readers. Jim Weed has assiduously weeded [sic] out my references to “Pininfarina-Scaglietti” in favor of – for the most part – “Scaglietti”. While logically recognizing where the actual panel-beating took place, that characterization fails to recognize where the design originated and to the stylistic development path from concept through drawing, layout, prototype and the ultimate production.

Pinin Farina created its first design for Ferrari in 1952, a 212 Inter cabriolet, followed by a coupé variant. Seventeen examples were built.

It was only two years later that Sergio Scaglietti bodied his first Ferraris, a series of 500 Mondials.

Thanks to Etienne Cornil’s “Ferrari by Pininfarina” we can chart an approximate evolution of Pinin Farina (Pininfarina after the formal name change in 1961) and Scaglietti. The list that follows isn’t exhaustive, mostly leaving out early limited-production Pinin Farina designs where there is no overlap and also variants within a single model.

During this period Pininfarina was building series production bodies, and fully assembling cars with them from manufacturers’ kits for Peugeot, Lancia, Fiat and Alfa Romeo, becoming a production partner for Europe’s automakers. It took them further and further from the low and modest production requirements of Ferrari.

Scaglietti’s new factory on Via Emilia Est in Modena at the same time expanded to meet Ferrari’s production expectations.

At its original Corso Trapani location, Pininfarina continued to design for Ferrari and to build extremely low production coachwork for Ferrari’s most discriminating clients.

In 1969 Ferrari and Fiat bought into a 3-way ownership agreement with Sergio Scaglietti before buying Sergio out, with a consulting agreement, in 1970.

Despite Ferrari’s increasing integration of its production into a single coordinated industrial organization, it continued its visual identification using Pininfarina designs from the revitalized front-engined V12 with 1993’s 456 GT in 1993 through 2002’s 575M.

Pininfarina fell on hard times after its disastrous 1986 Cadillac Allante debacle and was purchased by Indian tractor manufacturer Mahindra Group in 2015. It remains an automobile and industrial design group. Scaglietti has been integrated with Ferrari since the late-70s although retaining a separate identity. Ferrari now has its own internal bodywork design organization. However the continuity of the Pininfarina-Ferrari relationship persisted through the Enzo in 2002, a highly-developed, wind tunnel tested Pininfarina design built at Ferrari.

My feeling is that regardless of where the actual panels were beaten, and even recognizing that individual carrozziere like Sergio Scaglietti rarely – if ever – actually rendered a designer’s drawings without adjustment from the sensibility of the carrozziere, both sources should be recognized.

A Daytona is not a Scaglietti creation. It is a Scaglietti interpretation of a Pininfarina design and has unmistakable, even dominant, mid-60s Pininfarina characteristics. The same applies to the 250 GT/L “Lusso” and even the 250 GT SWB.

Crediting them as from either source exclusively does a disservice to the design history and contributions of all the participants and to the history of coachbuilding among the great (and small) houses of Italy. A Daytona without Pininfarina would not be the Daytona that was built, but neither would it be the Daytona without Scaglietti’s refinements.

Where applicable, Ferrari coachwork designed by Pininfarina and executed by Scaglietti should credit both of its origins as “Pininfarina-Scaglietti”.

Let’s work together (with opinions from other FML readers) to develop a realistic (“definitive” being, where Italian coachwork is concerned, a moving target) attribution.

The designer is important as it sets the style and shape of the Ferrari, but how do we know it was Pininfarina himself that designed the car? To follow Rick Carey’s argument the actual designer should be used. How many Harley Earl Chevrolets have you seen? We do not identify the 288 GTO as the Leonardo Fioravanti 288 GTO. I believe adding Pininfarina before a Scaglietti built car runs the risk of confusing who built the car.

A response from Rick Carey

As to the designer, however, I beg to differ.

Pinin Farina was no more the designer at the bodywork drawing board in Torino than Enzo was at the engine and chassis drawing board in Maranello. The individuals, Battista and Enzo, were the inspiration and direction of industrial concerns calling on the talents of growing organizations.

It is not an individual designer of the coachwork, chassis and engine who is recognized by calling a creation “Pininfarina” or “Ferrari”, it the sum of the efforts of the respective organizations under the leadership of Battista Pininfarina and Enzo Ferrari.

Is it misleading to recognize the coachwork of a 250 GT/L “Lusso” as “Pininfarina-Scaglietti”? No, it is clearly a Pininfarina design rendered in its final form at Scaglietti in Modena. There is no risk of confusing who built the car. Calling it only a “Scaglietti 250 GT/L Lusso” denigrates the contributions of the Torinese designers, modelers and craftsmen who originated the landmark design.

I also maintain that attributing everything Pininfarina designed and Scaglietti built solely to Scaglietti creates an undifferentiated category that detracts deserved credit from the Ferrari coachwork actually designed and built at Scaglietti in Modena like the 250 GT California Spyder and the 250 GTO. Those are true Scaglietti bodies and Sergio and his craftsmen should be recognized for both design and execution of them, not to be commingled with Ferraris like the 365 GTB/4 or 308. 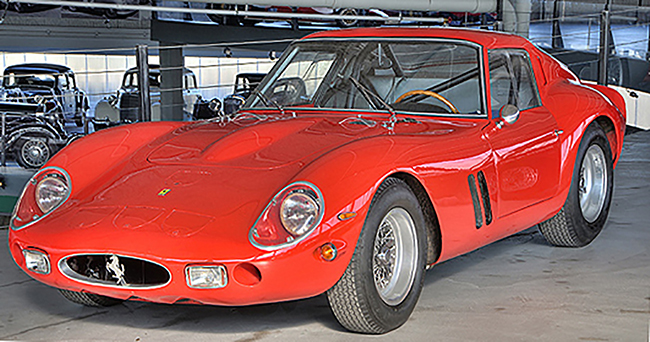 There are few enough pure Scaglietti Ferraris. They deserve to be in their own category.

I think we should open it up to a subscriber discussion. That would be interesting.

Rick Carey has made a good point. What do you think? As an old parts guy, my experience with these cars goes back to, who do I need to contact to get the parts? I admit I see things differently.

I am not opposed to changing the descriptions even if those descriptions were the same ones Gerald Roush also used. Then again, Gerald formed my own view of Ferrari and what various Ferrari nomenclature meant. Should we change? Let us hear your point of view.