The 36th edition of Italy’s equivalent of Retromobile in France and Techno-Classica in Germany took place October 24-28. More than 130,000 visitors attended from all over Europe and beyond.

The 36th edition of Italy’s equivalent of Retromobile in France and Techno-Classica in Germany took place October 24-28. More than 130,000 visitors attended from all over Europe and beyond.

Padova is a large, historic and wealthy city in Italy’s north eastern Veneto region just 40 kilometers from Venice thus benefiting from its international Marco Polo airport. It is less than two hour drive northeast of Maranello.

As ever in Ferrari’s homeland there were many historic and recent Ferraris on display or for sale.

The highlight of the whole show however was a Barchetta themed exhibition which grouped a very nice selection of historic ones to salute the current limited edition Monza SP1 and SP2. One Monza sat in the center of the purposely dimly lit hall setting an evocative mood.

The earliest example was the 1950 166 MM Touring Barchetta S/N 0064 M owned by British collector Clive Beecham. It was just back from the superb UK and Italy raid organized by Touring gathering a significant number of 166 Touring-bodied cars. This has also been shown at the MoMA museum in New York City in 1993. It has quite a history.

It was sold new in deep blue metallic to the future head of Fiat and later owner of Ferrari, Gianni Agnelli, in 1950. The Turin industrial empire scion owned it for two years before it was sold to Belgian Viscount Hendecourt.

A year later in May 1953 it won the Coupe de Spa with Belgian star Olivier Gendebien at the wheel. The pair would race it with less success in a couple of rallies and two more Spa races in 1954. Their compatriot Pierre d’Haveloose bought it and did a couple of hillclimbs in it before it was bought for the 1957 season by construction magnates Armand and Jean Blaton, alias “Beurlys”.

After a couple of other owners it ended up in the hands of Belgian importer Jacques Swaters in 1967. In 1980 he had it restored to its original color which must be noted had been a very discrete two-tone color with dark green metallic on the lower part of the body. It then took part in major events including the Mille Miglia, Spa Ferrari Days, FF40 in Brussels, the 50th anniversary of Ferrari in Rome, and the 60th in Maranello, before being sold in 2012 to London-based Beecham.

Regal appearances continued with Beecham. It took part in the Windsor Castle Concours d’Elegance, the Mille Miglia and won Best of Show at Lo Stile Mille Miglia. In 2015 came its greatest award in concours, the Coppa d’Oro at Villa d’Este; Ferrari royalty indeed. 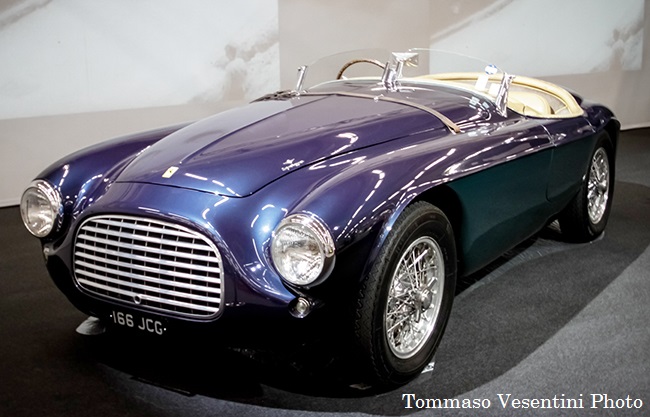 The next one in the exhibit certainly was major: 1953 375 MM PF Spyder S/N 0362 AM. Sold new to Tony Parravano and raced by Jack McAfee who won the SCCA National in it at Golden Gate Park near San Francisco, CA, weeks after setting a 172 mph top speed at the El Mirage Dry Lake record runs. He won at Omaha and several times at Palm Springs.

It was then modified with a shorter chassis before being bought by Frank Arciero who finished the job with a non-original body. He had it raced by future star Dan Gurney in 1958 and 1959 with victory at Pomona.

There was an engine swap, whether because of a failure or for more power, and a Maserati Indy 500 engine was installed. The 4.2 liter unit had plenty of grunt and Gurney, his friend Skip Hudson, and Bob Bondurant scored several podiums in the 1959 to 1961 seasons.

In 1968 an epic restoration began. It was sold to California experts Chuck Betz and Fred Peters, true characters who had a legendary knack for finding rare early cars or parts, even in the most remote Midwestern towns.

What they initially bought was a rolling chassis with no engine. The restoration was completed 44 years later in 2012.

For years and years they sought original 375 MM parts, in some cases knowing where they were but not being able to buy them. One mother lode of 0362s original parts was finally acquired in 1986, and a complete correct body was made. The Parravano family provided precious period photos which were of huge help. Finally a proper 375 MM engine, 0376 AM, was installed.

Perhaps the most complex, time consuming restoration on record, it stood as a tribute to the determination and savvy of the pair.

Deservedly it won the Concours on the Avenue Best of Show award in Carmel in 2013 and was sold at the Mecum Monterey auction in 2014.

Now owned by German Michael Stehle it is none other than the car in which Charles Leclerc rode in for the driver’s parade before his historic win at Monza this September; perhaps it brought him luck? 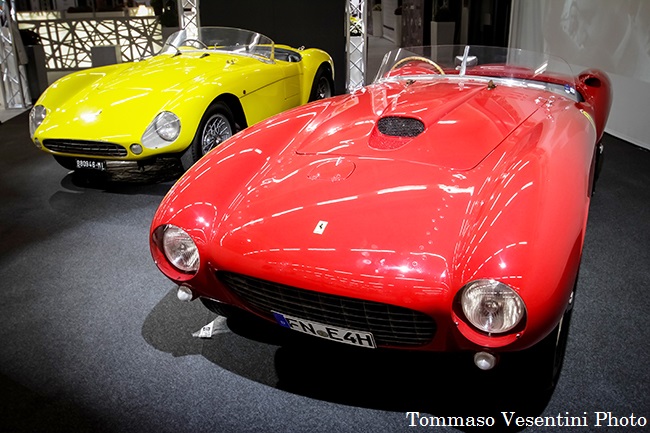 One that lived a much simpler life never leaving its homeland is the bright yellow 1954 500 Mondial PF Spyder, S/N 0410 MD. Seen in recent years at the Museo Casa Enzo Ferrari in Modena.

It was sold new right in Modena to S.A.I.P.A. Srl and raced by Gino Casarotto in 1955 and 1956 without notable results. After a succession of owners it was bought before the mid-1980s by famous collector Mario Righini who has a private museum in his castle between Modena and Bologna in Anzola dell’Emilia.

Under the centuries-old arches it basks in the admiration of visitors. Righini has had it at four Mille Miglia, 1988 through 1992, and the Modena Cento Ore Classic in 2005. No stories with this one, though it had a raised body section behind the driver’s headrest in early years which vanished long ago.

The 1953 340 MM Vignale Spyder S/N 0280 AM was initially a factory team car which wrote two major pages of history winning that year’s Giro di Sicilia with Villoresi and Cassani. Two weeks later it triumphed at the Mille Miglia with dapper industrialist Giannino Marzotto who famously raced in suit and tie.

After various owners it ended up with the respected Mario Camellini in Modena who was close to Enzo Ferrari and in fact became his very first dealer. His son Umberto now cares for it since 1987. He has raced it numerous times on the Historic Challenge circuit, lending it to David Piper for the 1997 Monaco Historic GP.

In October of 1996 Michael Schumacher tested it at Mugello. One wonders what our seven-time world champion thought of the beast which had a reputation as hard to tame in period. It won Best of Show at the 70th Anniversary Concorso. 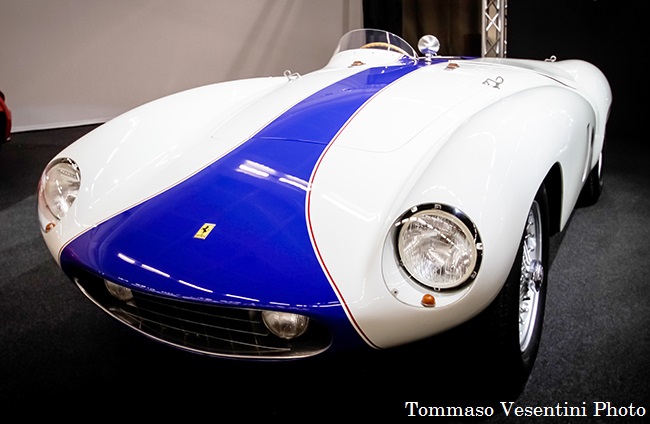 Proudly showing its colors of white with blue center, 1955 750 Monza Scaglietti Spyder S/N 0502 M would spend its first 30 years competing in the United States, doing very well. Sold new to William Doheny of Beverly Hills, CA, he entrusted Ernie McAfee behind the wheel for what would be eight victories in Santa Barbara and Palm Springs that year.

Temple Buell bought it for 1956 and had it driven by Dabney Collins mostly and by Masten Gregory, though without wins. Its career wound down and it suffered the ignominy of receiving a Chevrolet engine in 1959 when the original engine either failed or was deemed lacking.

It soldiered on in various races until 1966. Jim Hall at some point in the 1970s owned the engine and the then owner of the car, Bruce Lavachek, was able to buy it and reunite it with the car though he did not restore it which it needed badly.

It then left the USA for England where Hall & Fowler restored it in the 1990s. In 1997 it was sold to Bruce Perrone of Pittsburgh, PA. He had it restored again in Modena, then showed it numerous times at the Cavallino Classic. It was sold to German Detlef Fischer in 2007.

Last, but not least, was the awe inspiring 1955 857 Sport Scaglietti Spyder S/N 0578 M /203 M. One of four built this one started life as a 750 Monza Scuderia Ferrari car, finishing 2nd in the Monza Supercortemaggiore with Mike Hawthorn, and a win at Mugello, which was at that time a temporary road course made of local roads.

There it was driven by Umberto Maglioli who also won the Aosta Gran San Bernardo hillclimb that summer. It was a test mule receiving different engines before being modified in late summer of 1955 into a 857 Sport. The final engine evolution brought it to 3.4 liters, the maximum displacement reached by this engine type, named after each cylinder’s capacity. Gendebien and Hill came second in it at the 1000 km Buenos Aires in 1956.

After a DNF at Sebring in 1956 with de Portago and Kimberly, it went on a globe-trotting career in New Zealand during 1957 (no podiums) then was sold to Swedish driver Rune Bertilsson. It was raced by John Kvarnström in Finland and Sweden including some frozen lake ice races with a 4th at Helsinki. After its retirement and a slew of owners it received engine 0584M early this century and is now owned by Brit Marc Newson.

Also shown was a 550 Barchetta, the last exhibit closing the time loop.

Exiting that amazing hushed gathering of Barchetta was like leaving the proverbial womb but there was a whole show to enjoy.

Padova, as it is nicknamed by non-Italians, is renowned for what you may encounter when turning into another alley. Discovering a 250 GTE police car should not have come as a surprise; it must have been quite daunting to be pulled over by the impressive black machine.

Dealers are always present in numbers and this year Max Girardo’s firm made its debut at Padova with a superb fly yellow Daytona Spyder S/N 14403. Sold new by Chinetti to the Halsey family in exclusive Bryn Mawr, PA, it stayed with them until 1990.

It was then restored. After receiving awards at the Cavallino Classic in later years it came back to Europe in 2013 where it was repainted in its original fly yellow by Cremonini near Modena. They are reputedly the best automotive paint shop anywhere. It comes complete with Red Book Classiche certification.

Local and international dealers offered everything from a 308 GTB to a 488, 550 Maranellos and an F40. A silver with tan 250 GT PF Coupe stood out. 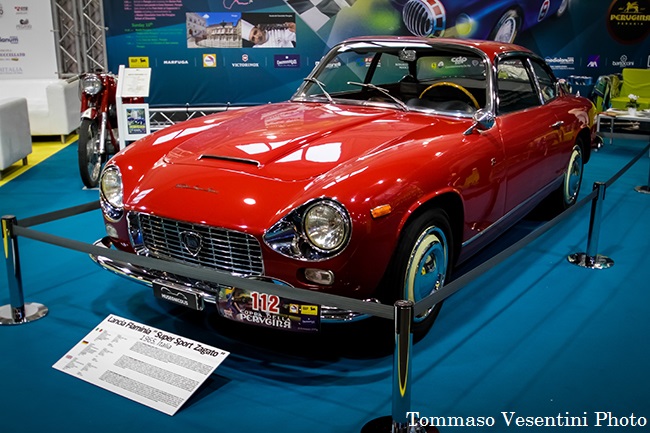 Italy’s rich motorsport and GT heritage is always present with lots of small engine oddities from long gone marques that built but a handful of cars.  An Ermini single-seater seemed to have very much taken its design cues from a 166 Spyder Corsa, looking like its smaller sibling. Fiat-based specials abounded.

Italian auction house Finarte traditionally organizes an auction during the show. Much amusement was caused by the estimation of a Maserati 3500 GT project (needing absolutely everything) purported to have been used by the late five time world champion Fangio as a daily driver during his time racing for the trident.

On the basis of a letter by Fangio, the estimate was  double what the best perfectly restored 3500 GT would cost...predictably high bidding stopped well short and supposedly reached €400,000, no doubt a bid by the ever invisible Mr. Chandelier.

Offerings were found outside as well as about 5,000 classics on offer from private owners, including cute as can be microcars which looked like escapees from a cartoon.

The outside lot is very much a tradition at Padova with northern Europeans; Germans, Dutch and Swiss in particular, showing up with a flatbed or, if optimistic and brave, driving home in their new acquisition instead of flying.

This writer’s favourite part is back inside. The memorabilia is the best on offer in any show; better than its French and German siblings as many of the vendors don’t bother taking part in shows outside of Italy with their treasure stash and Italians definitely lead the pack for their own nation’s goods.

Here you can get your hands dirty by leafing through hundreds of period brochures and photos, race posters and magazines; rare old books sometimes signed by great drivers; garage shields, driver’s helmets, overalls, pins and of course scale models from old and extremely rare to brand new and incredibly detailed, are just a sampling.

You may find a rare old treasure that you just have to take home despite costing an arm and two legs.

Passion, after all, is irresistible.