NO ONE ACCOMPLISHES ANYTHING WITHOUT THE HELP OF OTHERS

I started out just like everyone else…packing and shipping orders all over the country and even to places overseas.

I started out just like everyone else…packing and shipping orders all over the country and even to places overseas.

The Hunter and Apen families owned the dealership and our FAF catalog was the focus of our world in parts. I guess you could say we were similar to the internet before there was an internet.

I think about three years passed before Kellett and Weed let me have a shot at talking to customers on the phone. They pushed me hard to study the catalogs, do research in the dealership, and learn as much as I could about Ferrari.

All we needed back then was a phone that had a cord attached to it, which is quite different today.

Looking back we were just doing a job that was fun to us; we didn’t realize the impact we had on the Ferrari world. We became a lifeline for parts and service to people all over the world and helped them maintain their Ferraris. 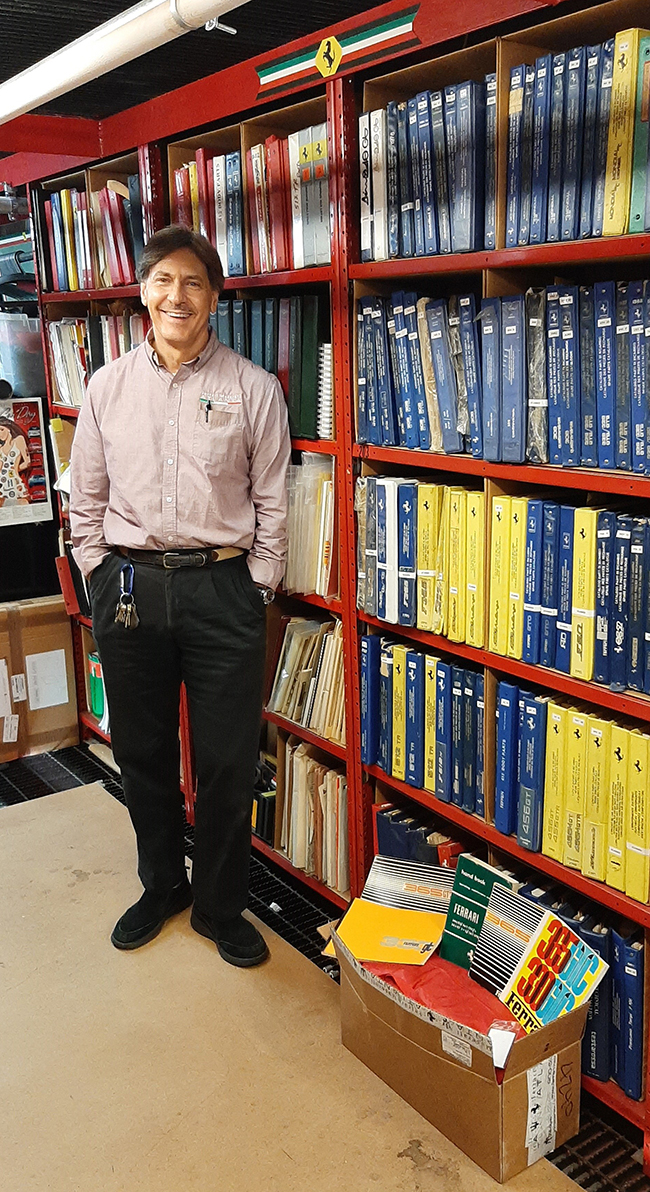 To this day I still receive calls from people referencing the FAF catalog.

We were a factory-authorized Ferrari dealer but a lot of people did not think that, probably because we were doing something different than the norm.

From the early days of the Ferrari network, with the help of Livio Ramani at Algar to present day, we all collectively help each other in solving issues for our customers.

In the mid-1990s the dealership was purchased by the Ed Wettach family of Jackson, Mississippi. There was a change coming from corporate and the dealership needed to be relocated to our current location in Roswell, Georgia.

At that point everyone who worked at the dealership either made the choice to move on from the company or reapply for their positon.

The migration from Tucker to Roswell included myself, Hugh Steward the GM, Wade Williams, and Ken Erwin along with a few others. After relocating, we became more of a “traditional” car dealership; moving away from catalog sales and focusing more on the cars in our service department.

It has been an incredible journey with Ferrari over the years. Some highlights of mine have been visiting the Ferrari factory for their annual parts manager meeting. While there, I could really see the passion that goes into every car they build. Thanks, Enzo Francesconi!

We have made great strides as a dealer. Under the current guidance of Webb Collums, Will Campbell, Craig Forbes, and Matt Luckie, we have pushed through and been awarded Top Ferrari Service Department Worldwide in 2018.

Everyone at the dealership helped in obtaining this very prestigious award. As I said in the beginning, no matter what your journey in life is, there are people that help you and guide you along the way.

The early days helped mold my character and taught me to continually strive for excellence.

Just like in any family, we have lost people along the way. Ed Wettach, Ken Erwin, Ted Rutland and Larry Cannon are all in car heaven where I am sure there is no such thing as a backordered part.

I have full confidence handing over the department to the “younger guys”: Phil, Ivano, Felipe, and Luke. I believe that they will carry on just fine.

I want to say thank you to everyone I have met along the way. Some of you were kids coming into FAF; buying books and learning about the cars.

Now, you come in with your own kids and pass on the love of Ferrari to them.

To my mom and dad: I did get to go the Ferrari factory! I’m sorry I couldn’t tell you both about it.

My biggest thank you, however, goes to my wife for putting up with me over the years and all of the nights I came home late; I really was at work!

I’m not sure what my next steps are in life, but just like the past 40 years, I know that it will be active. It’s is not in my nature to slow down or “take it easy.”