Even as a kid I was a sports and race car enthusiast, but I only had magazines to satisfy my curiosity and get information.

Even as a kid I was a sports and race car enthusiast, but I only had magazines to satisfy my curiosity and get information. Examples: “Sports Car Digest” and “Sports Cars Illustrated”. Imagine my young kid excitement when the Fuller Brush man dropped off their latest product brochure and Phil Hill was featured. From that moment on I followed his race career religiously.

Over the years I kept that dog-eared brochure never thinking in a million years I would ever get to meet Phil Hill in person, but I did!

A bit of background information is needed that led up to my Phil Hill meeting. In 1979 my partner, Judie, and I, started Lyle Tanner Ferrari Parts which grew steadily to a large new and used Ferrari parts supplier and restoration facility.

One day Judie came in my office and said, “you have a call on line two from Phil Hill”. Since she knew I was a big fan I was certain she was joking. I picked up the phone and in a rather unfriendly tone said, “Hi, Phil”. A minute into the conversation I realized it really was Phil Hill! He was calling from his shop in Santa Monica and needed some help finding a couple of vintage Ferrari parts. Judie was watching this conversation and said I went from bright red embarrassment to slightly pale.

Needless to say I found the parts he was looking for and delivered them in person. That first meeting led to many interesting conversations and visits; me to his shop and Phil to our shop. My respect and admiration grew with each conversation or meeting.

One of the most interesting was in his home garage where I spotted a steering wheel on a shaft that went towards the floor. The shaft was attached to two leaf springs and the seat looked like it was a tractor seat. Phil explained to me that it was what he would sit in to exercise in to build up stamina so he could drive race cars long distances.

During one conversation he talked about racing in the Mille Miglia in the 1950s. Phil said rear tires were a big concern for all the drivers and stopping to check them took time. Phil and his driving partner set up a system that was hooked up to the distributor that would flash a light intermittently. They put a door behind each seat that could be removed and with the flashing light they could check the tires without stopping.

During one race event we attended together there was a 750 Monza that was making some very nasty sounds from the engine. Phil turned to me and told me exactly what the problem was. A week or so later the owner of the car called for replacement engine parts.

My best memory of so many was a race event we both attended. During a walk through the pits he saw an old friend and introduced me to him, Juan Manuel Fangio. I was stunned; I was sharing space with two of the race gods. Oh, what I would have given for an iPhone!

Once in a while life gives you a gift, I got one of mine in my friendship with Phil Hill. 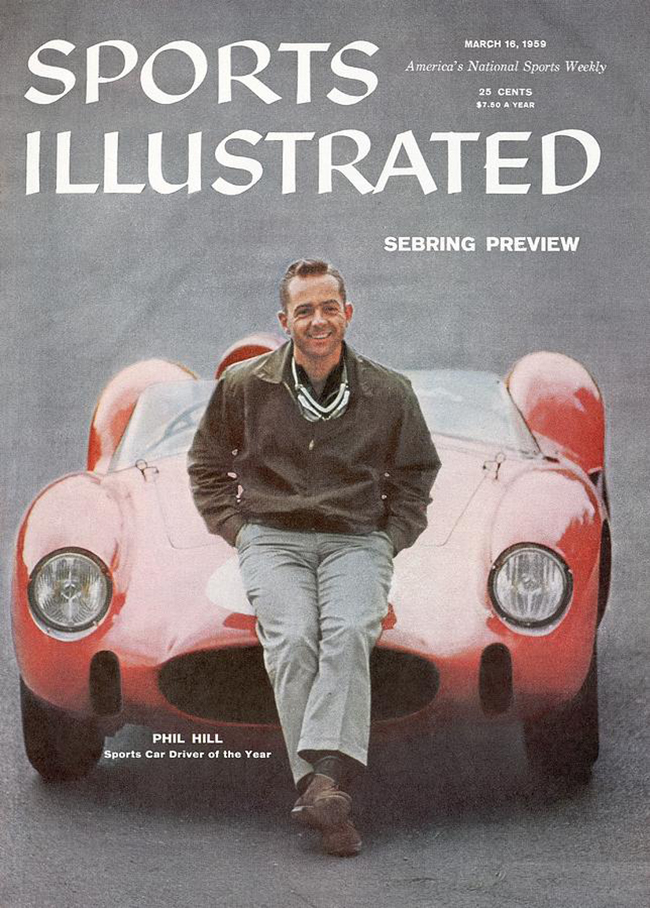