MPH OR KPH - YOUR MILEAGE MAY VARY

Once again I find myself closer in age to the dinosaurs than to the younger crowd.There is a new business that has opened close to my home in Suwanee. Shameless plug follows: Atlanta Motorcar Club and Storage opened their doors recently. The concept is simple; store your car inside the warehouse, pay the initial membership fee and a monthly fee.

Once again I find myself closer in age to the dinosaurs than to the younger crowd.

There is a new business that has opened close to my home in Suwanee. Shameless plug follows: Atlanta Motorcar Club and Storage opened their doors recently. The concept is simple; store your car inside the warehouse, pay the initial membership fee and a monthly fee.

I don’t have any special cars; well, maybe the 1958 Edsel, and as long as I can keep it at home I’ll save the money. That covers the storage end of the business; it’s the club I want to discuss.

They have a beautiful bar area set up, inviting couches with big-screen TVs all around. There is even a luxurious meeting area that overlooks cars lined up in rows on the floor of the warehouse.

The menu offers sandwiches, flatbreads and snacks. There is a full bar with an excellent selection of fine wines and liquors. Nothing is more inviting than enjoying a drink with other interesting and like-minded car nuts.

What a great way to start the weekend than to spend a couple hours talking cars before heading off to a night of dinner and dancing.

Once a month they have a Saturday open house and cars show up to hang out for a while. While you must be a member to store your car, the Friday night get-together and Saturday gatherings are open to all.

There are no Ferraris. A 458 Spider did show up a couple months ago but I haven’t seen any since. I have become the Ferrari answer-man.

What has been interesting is the passion all have for their car. I have talked to the BMW guy; he knows way more than I ever will about those.

One owns two Oldsmobile Cutlass Supremes. Both have been restored. One was formerly owned by his father and restored as a father-son project. Both cars are very nice, not Pebble Beach quality, but better than new. While he was describing his story, it was the passion of working on the restoration that became obvious.

Another gentleman and his wife are exceptionally versed in Mustang history and the various models built. They sound like I would if I was discussing Ferraris. Again, the passion comes through.

What I found is commonality in owning unique and special cars. I also found that others value low mileage, or at least don’t drive their cars much. The Mustang couple own a 2005, or thereabouts, Roush Mustang with delivery miles. Something like under 100 miles.

Listening to them reminds me of many of our Ferrari owners. Now I get buying a 458 Speciale Aperta and putting it away, not putting miles on it because it will be worth so much more in the future.

Does the same attitude work for a 488 GTB? I received a call the other day from a subscriber and he described how much he loves his 458 Spider. He bought it new, it has 1,200 miles.

Clearly, over the years he has only occasionally enjoyed the Ferrari driving experience. The joy of ownership really should include some cut-loose fun with the car. Yeah, he may get a better price for having low mileage but will the memories be as memorable if it spent most of the time in the garage?

Is the value of owning a Ferrari based upon the bragging rights of ownership or the joy of burning up the highway, cutting a perfect line through the asphalt, while making the gearlever or paddles provide music that only a Ferrari engine can? 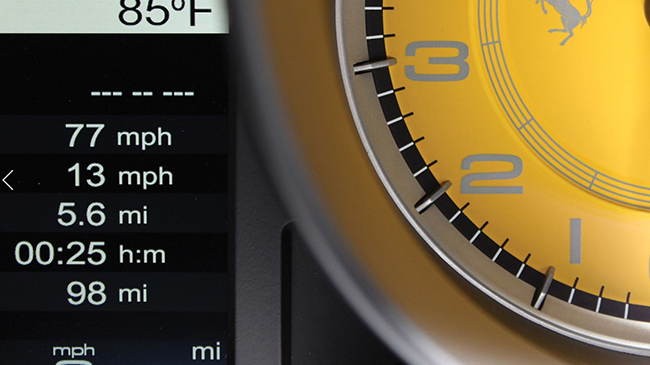 The challenge is not just to drive the car but to drive it well.

Believe it or not, there was a time when Ferraris were used and abused on the road. I look at a lot of history. I see old advertisements where cars are listed as three or four years old with 25 or 30,000 miles.

It would take several lifetimes for a 250 Lusso today to accumulate this kind of mileage, but this was the norm when the cars were new. What I really find interesting is the mileage discrepancy and how we view mileage in today’s context.

When you read an ad and it gives a mileage number; what does it really mean? Does the ad that says 3,500 miles mean the vehicle has only ever traveled 3,500 miles since new? Or is that the mileage since total restoration? Or since the speedometer was last changed?

Is the mileage even correct for the speedometer? I have a discussion often about Boxers. The Boxer was not produced as a USA version. All Boxers in the USA are gray market cars. Part of the conversion process is converting the speedometer to read in MPH.

Back in 1982 a new Boxer speedometer was expensive. The cost for conversion was expensive. It would make more sense to replace just the speedo face plate than replace the entire unit. The speedo needle now points to a spot on the gauge that corresponds to the MPH rate of speed but the odometer is busy clicking away distance traveled in kilometers. 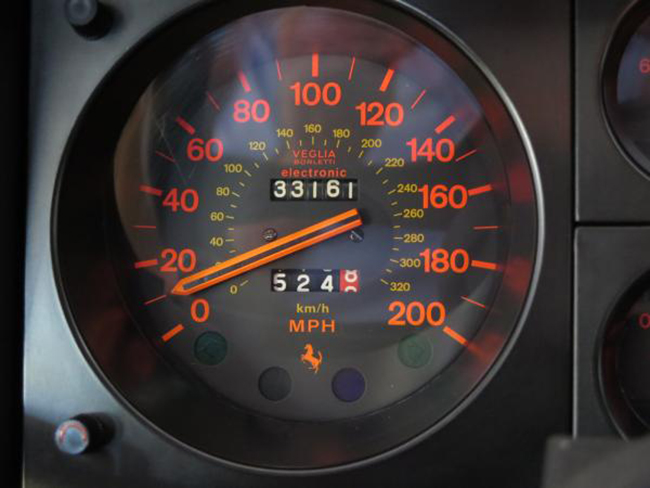 Boxers sold into the UK had true MPH speedometers. I know, I imported and sold many back in the day. Do you really think the mileage was cranked up to match the old speedo? No, the new unit was installed, and now with zero miles, the Boxer was driven again without regard to how many miles were erased.

Drive a mile or two against the mile markers on the freeway and see if the odometer faithfully clicks off its numbers to the correct distance.

I used to rebuild speedometers for the 250/275/330 cars when I sold parts. FAF had a number of used units that didn’t work. I took them home and repaired them. I reset the odometers to zero. When sold, the defective unit was returned and I would repair the next one.

What about the 308s with 85 MPH speedometers? How many of those cars are still sporting the original unit? When I was service manager at FAF I had cars that received multiple speedos. 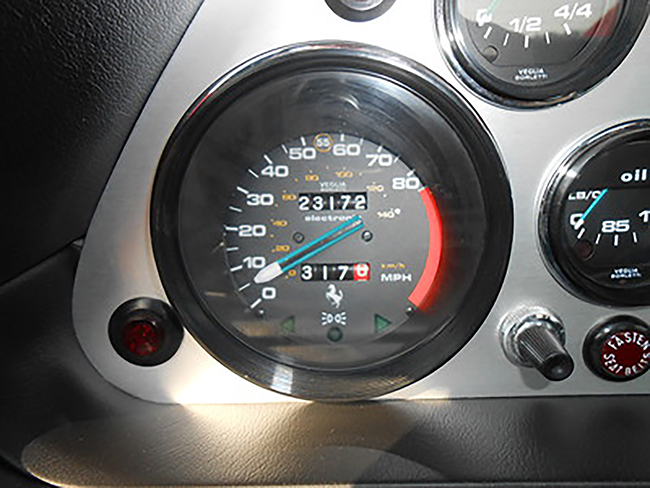 The early cable driven cars weren’t much better. Customers could keep the mileage low by disconnecting the cable from under the dash. Three thousand mile oil changes were done at three hundred mile intervals. Dirty oil tells no lies.

What about restorations? If the car was completely restored should the original mileage be erased? The gauges get rebuilt and odometer reset to zero. Does this really represent the true mileage? Just because the Ferrari was new once and now completely redone is it still new?

And there is at least one case of resetting miles of an already low mileage Ferrari using Ferrari’s own electronic capabilities.

The point is, when I hear mileage discussions, particularly low miles or other claims of ‘original’ miles, I approach every comment with a jaundiced eye. If there isn’t any information in our files from new and it is a one owner car, clearly purchased and put away, the claims may be true.

Other than those few cases I need to be convinced. Does it really matter? I think not. Ferraris are meant to be driven; Enzo didn’t build them to be put up on a pedestal and admired. He would love to hear the engine at full song; that point just before red-line is where the music is best.

Ferraris are not fragile; they are strong and capable of being used. From the early fifties through the newest 488, 812 Superfast and the F8 Tributo they are meant to be exercised regularly.

Any mechanic will tell you the cars that get used regularly are the ones with the fewest issues. So, put away the BMW, or Cadillac, or whatever you drive and take the Ferrari out for a drive. Make one day each week your ‘take a Ferrari to work’ day. You will continue to find each day with your special steed improves your attitude.

There is a Zen to being one with a mechanical machine and when you achieve that, the connection can only get stronger. Don’t sweat the miles, they’re probably not correct anyway.