DINO 206 GT, S/N 00106 (1968). Yellow with black leather, dark blue cloth inserts. Estimate $2 million to $3 million. Recent restoration, 2 condition. Hammered sold at $2.8 million plus commission of 10 percent = final price of $3.08 million. 5-spoke alloy wheels, Goodyear Blue Streak tires. Pininfarina’s second pre-production prototype, 1966 Torino Motor Show display car, with longitudinal engine mounting. Restored by Mike Sheehan in the early 1990s. Excellent paint, chrome and interior. The engine compartment and chassis are nearly like new except for a little storage dust. Stored for a quarter century, recently serviced to run and drive but needing more work before hitting the road. Historically significant and different in many ways from production 206 and 246 GTs that followed including the longitudinal engine, longer tail and the long chrome spear down the side recess for the rear air intakes. It is an unusual opportunity to acquire a seminal and distinctive Ferrari. Lot # 124. Gooding & Co. 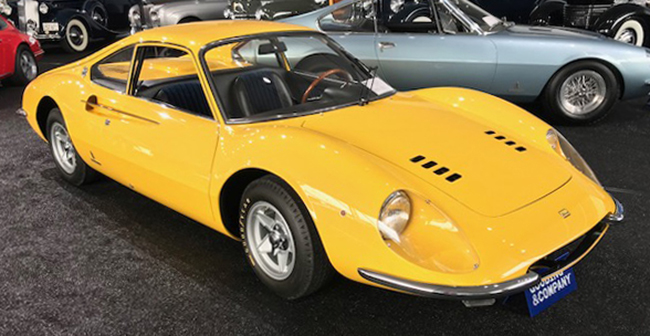 DINO 206 GT, S/N 00160 (1968). Rosso Dino with black vinyl. Estimate $550,000 to $750,000. Cosmetic restoration, 2- condition. Hammered sold at $520,000 plus commission of 10.96 percent = final price of $577,000. Cromodora alloy wheels, Michelin XWX tires. Looks nearly like new. Excellent paint, chrome, interior and glass. Excellent door fits. Known history from new and apparently never restored, just given attention as needed when required including engine and transmission overhaul in 1987 (at 70,000 km compared with 82,155 on the odometer today) and fresh cosmetics and mechanical freshening in 2008. The engine compartment is lightly oiled, as it should be. A very attractive, sympathetically owned and rare Dino. Sold by Gooding & Company at Scottsdale in 2010 for $220,000 in perhaps slightly better condition than it is today but with no further restoration or refurbishment since then. The pre-sale estimate range is unusually broad and it would not have been a surprise to see this exceptionally well-maintained 206 GT bring another $100K on the hammer making this a very good buy for the new owner. Lot # 218. RM Sotheby’s.

DINO 246 GT, S/N 03496 (1972). Blu Scuro Dino with tobacco leather with black inserts. Estimate $350,000 to $275,000. Older restoration, 2- condition. Hammered sold at $335,000 plus commission of 11.49 percent = final price of $373,500. Cromodora wheels, Daytona seats, Blaupunkt cassette stereo, power windows, air conditioning. Restored in the mid-2000s with good older paint and chrome. Maintained and tidy but not spotless engine bay. Lightly wrinkled seats. A good car in attractive colors and there’s nothing major wrong with it, it’s just not super fresh. Sold by Gooding at Amelia in 2012 for $214,500 and changing hands here for a generous price aided in no small degree by its unusual and highly attractive colors as well as the confidence instilled by a decade and a half old restoration that is holding up very well. Lot # 007. Bonhams.

DINO 246 GT, S/N 03872 (1972). Nocciola Metallizzato with tobacco leather. Estimate $500,000 to $400,000. Recent restoration, 2+ condition. Hammered sold at $370,000 plus commission of 10 percent = final price of $407,000. Ansa exhaust, Becker stereo, leather-wrapped steering wheel. Fantastic paint. The brightwork is very good with a few light scratches on the side window trim. The engine bay is very clean and the interior appears freshly redone. A thorough restoration finished in 2014 and shows very well. It apparently showed even better at the Gooding Scottsdale auction seven months ago when it was reported sold for $462,000. Either result is an appropriate price for a quality Dino coupe but it was an expensive seven months and 71 more miles on the odometer. Lot # 029. Gooding & Co.

DINO 246 GTS, S/N 08070 (1974). Violo Metallizato with black leather. Estimate $450,000 to $550,000. Recent restoration, 2- condition. Hammered sold at $425,000 plus commission of 10 percent = final price of $467,500. Borletti air conditioning, power windows, Cromodora alloy wheels, Toyo tires. Good new paint purported to be the original color (one of 31 delivered in Violo) and attractive new lightly stretched upholstery and mousehair style dash top. Engine and chassis are freshly done to like new standards. Sold by Gooding at Amelia in 2014 for $341,000 before the restoration. The price it brought here reflects its quality restoration and the unusual color, at least for those who like violet. No matter what your opinion of the color is, though, it will be impossible to miss even among rows of Dinos, mostly in red/tan. Lot # S056. Mecum Auctions.

DINO 246 GTS, S/N 08512 (1974). Pino Verde Metallizzato with beige, black leather. Estimate $600,000 to $500,000. Unrestored original, 2- condition. Hammered sold at $480,000 plus commission of 10 percent = final price of $528,000. Chairs and flares, Campagnolo wheels, leather-wrapped steering wheel. Comes with the original tool roll, seat covers, manuals in their original folio, parts catalog, service directory, warranty and service books. Good original paint with a few stone chips to the nose and some chips behind the rear wheels. The brightwork is very good and without significant fading. The underbody is well detailed and shows little oxidation at all. The seats have some light creasing from use and the dash pad has what seems to be some water staining near the bottom of the windshield. Surprisingly well maintained car and almost too good to be original, but Ferrari owners have a tendency to pamper their cars. Based on the condition, the 27,487 miles on the odometer are most likely all this Dino has covered in the past 44 years. It brought a heroic price for its condition, but the allure of never-apart and all original is strong and is reinforced by the unusually comprehensive documentation. It is expensive, but it deserves to be. Lot # 155. Gooding & Co.

328 GTS, VIN ZFFXA20A4K0082125 (1989). Nero Metallizzato with crema leather. Estimate $250,000 to $200,000. Unrestored original, 2- condition. Hammered sold at $167,500 plus commission of 10 percent = final price of $184,250. Blaupunkt CD stereo, books, tools, jack, Classiche certified. Excellent original paint. The underbody is clean and shows minimal fading from sitting. The interior is very clean and only shows minimal creasing to the driver’s seat. Well maintained, with just 1,925 miles and with few indications of use. Wow! Talk about an originality premium, this is it! The result here is 50% more than an otherwise perfect 328 GTS. The new owner may be able to drive it, oh so carefully, another thousand miles without seriously denting the originality premium, but a scratch or a stone chip will be a calamity and this Ferrari is likely to spend the rest of eternity in a climate controlled garage. Lot # 042. Gooding & Co.

F40, VIN ZFFGJ34B000088083 (1991). Red with red cloth. Estimate $1 million to $1.2 million. Visually maintained, largely original, 3+ condition. Hammered sold at $954,545 plus commission of 10 percent = final price of $1.05 million. Modular alloy wheels, P Zero tires, Classiche certified. Good clearcoat repaint with small masking oversights. Unblemished upholstery and belts. The engine compartment and chassis are aged and oxidized. Sound and well-maintained, represented with 16,501 km. The F40 is the last predominantly analog Ferrari supercar, placing a premium not on algorithms and sensors but on the driver’s butt, hands and feet. It’s gradually losing favor among nouveau riche who think active traction control, active braking and a bevy of self-managed aerodynamic tweaks are essential to going fast. In case they’re listening, F40 is the way to demonstrate your Villeneuve/Schumacher/Nuvolari instincts and responses. Sold here in a post-block transaction, with relatively high kilometrage, this is a driver’s challenge at a realistic price. Lot # 112. Gooding & Co.

360 SPIDER, VIN ZFFYT53A310123547 (2001). Yellow with black leather. Estimate $100,000 to $125,000. Unrestored original, 2- condition. Not sold at hammer bid of $75,000. 6-speed, carbon fiber seats. The car has a clear bra but appears to have flaws underneath. Rock chips are under the bumper behind both rear wheels and there are paint chips under the bottom right of the rear grille. The top is in good condition. The interior is generally good with driver’s side bolster wear and scratches to the driver’s inside door handle. A presentable 360 made more desirable with the 6-speed, but it could be better given the 14,875 miles. It’s not a standout from a condition point of view but it’s yellow and it’s a 6-speed. The reported high bid undervalues the 6-speed. Lot # S180. Mecum Auctions. 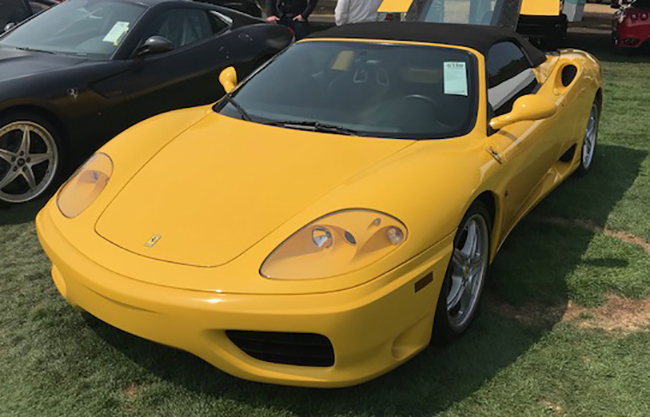 CALIFORNIA T, VIN ZFF77XJA4H0227523 (2017). Rosso Corsa Metallizato with tan Peccary leather. Estimate $300,000 to $350,000. Unrestored original, 2 condition. Hammered sold at $310,000 plus commission of 11.61 percent = final price of $346,000. Painted SF shields, black calipers, carbon brake discs, handling package, 70th Anniversary livery #20 “The Redhead”. Good original paint and interior. Barely used, with delivery miles only. There are 12 California Ts in the most recent issue of FML. The most expensive asking price is $249,995. None of them however is a 70th Anniversary and this seems a reasonable enough premium for the unique livery and negligible miles. Lot # 207. RM Sotheby’s.

166 MM TOURING BERLINETTA, S/N 0060 M (1950). Blue with black leather. Estimate $6. 5 million to $7.5 million. Recent restoration, 2 condition. Not sold at hammer bid of $5.5 million. RHD. Silver painted wire wheels, Dunlop Racing tires, Marchal head and fog lights. Raced by Cornacchia and Sarafini when new, then exported to Chinetti in New York after it was shown at the 1950 Paris Salon. Bought by Briggs Cunningham for whom it was upgraded to 195 S specs, then entered in Sebring driven by Chinetti and finishing 7th overall and first in class. Later raced at Buenos Aires finishing 7th driven by Jim Kimberly, Bridgehampton (Phil Walters 2nd) and Watkins Glen (John Fitch 2nd.) Later owned by Henry N. Manney III, with a long, active career following until it was restored in 2001, taking second in class at Pebble Beach. Excellent paint, interior and bright trim. Freshly done to better than showroom condition without going too far. Represented as the original engine, chassis, gearbox and rear axle. Sold by Gooding at Scottsdale in 2016 for $6.49 million and seriously light of both the consignor’s expectations and the car’s history and condition at this bid. Lot # 145. Gooding & Co. 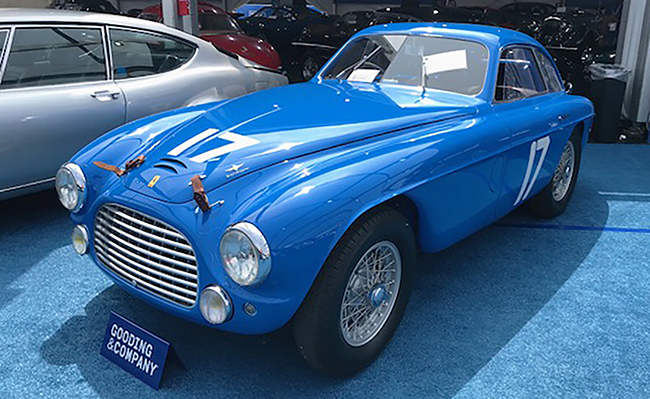 250 MM PININ FARINA BERLINETTA, S/N 0344 MM (1953). Dark blue with tan leather. Estimate $7.5 million to $9 million. Competition restoration, 3+ condition. Not sold at hammer bid of $7.4 million. RHD. Silver painted wire wheels, Avon tires, sliding side windows, Plexiglas hood air deflector, heater, Marchal headlights, painted SF shields. Raced when new by Mas-Olle Persson in Sweden, later by Gösta Forsberg and Charles Lohmander. Acquired by Pierre Bardinon in 1972, later part of the infamous Consolidator Collection of Hans Thulin. Very good recent paint, chrome and interior. The underbody has been repainted assembled, and not recently. Eligible for just about anything a new owner could want, including the Mille Miglia, with ovoid Pinin Farina coachwork, eggcrate grille and air vents that give no doubt at all about its competition purpose. Even at that the reported high bid, just $100K under the low estimate (1.3%), seems reasonable for its presentation and history. Lot # 151. RM Sotheby’s.

500 MONDIAL SERIES II SCAGLIETTI SPYDER, S/N 0556 MD/0446 MD (1955). Engine # 446. Light blue with red. Estimate $5.5 million to $7.5 million. Competition restoration, 2 condition. Hammered sold at $4.55 million plus commission of 10 percent = final price of $5 million. RHD. Marchal headlights and fog lights, silver painted Borrani wire wheels, Dunlop Racing tires, driver’s head fairing, metal passenger’s seat cover. Excellent paint and upholstery. Restored like new by its multi-generational owner. Bought by François Picard and obligingly stamped by Ferrari with the chassis number of Picard’s 735 Sport, 0556 MD. Traded back to Ferrari, it raced for the Scuderia at the Venezuela GP in 1955 finishing 1st in class and 5th overall. Then sold to Porfirio Rubirosa with two class firsts at Nassau and one at Sebring in 1956. Later sold to Charles Hassan, then Robert Ready Davis who stored it in the Bay Area after the differential seized. It was purchased in 1960 by Robert Phillips, a U.S. Navy Supply Corps Lieutenant J.G. He has owned it ever since, compiling a series of racing appearances and at least one cross-country trip during Navy reassignments which culminated in his promotion to Rear Admiral and Paymaster of the Navy before retiring in 1988. Then began a comprehensive personal restoration that brought the Mondial 1st in class and the Enzo Ferrari Trophy at Pebble Beach in 2008. Documented with a (rare as hen’s teeth) 2003 Ferrari Classiche Heritage Certificate and a voluminous history file. It is just a cool thing, with a marvelous history of 58 years’ continuous custodianship. The research and documentation accompanying this 500 Mondial sets a new standard for “comprehensive”. The transaction value? It is no more than the car’s history and condition deserved. The new owner should be proud to carry on the tradition. Lot # 022. Gooding & Co. 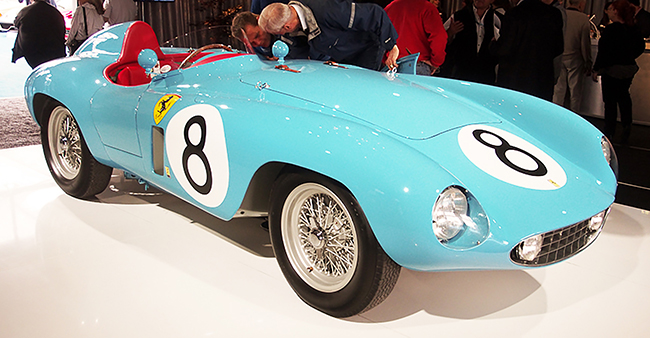