A major highlight of the calendar held every even year was the 11th edition of the Monaco Historic Grand Prix which took place May 11-13.

A major highlight of the calendar held every even year was the 11th edition of the Monaco Historic Grand Prix which took place May 11-13.

Absent this time were the Formula 3 and Formula junior series replaced by more F1 grids with more Ferraris.

The parade included several Grand Prix greats such as Riccardo Patrese, Jarno Trulli and Thierry Boutsen along with Josh Hill, son of Damon, and grandson of the late Graham Hill.

Last but not least was 1996-1999 Ferrari F1 driver, Eddie Irvine, driving a 1977 McLaren M26. Quite the character, his first chat with Luca di Montezemolo over 20 years ago was to complain about spare parts prices for his Daytona which startled Il Presidente unused to such Irish frankness. Irvine, a notorious bon vivant, no longer has the Daytona, or any classics, but does extremely well in real estate in Miami.

After the A-series (series meaning race group or grid) for pre-war Bugattis, ERA’s Delages and a couple of Maseratis, the B-series for pre-1961 front-engine Grand Prix cars was the one with the earliest Ferrari: the 246 F1 of Alex Birkenstock. This hallowed chassis is a regular entry in Monaco, albeit under new ownership and is none other than the car in which Phil Hill won his first GP, at Monza in 1960, while scoring the last victory of any front-engine Grand Prix car. It later went to New Zealand and won the Gold Star trophy driven by Pat Hoare. In Monaco it faced half a dozen Cooper Bristols, four Maserati 250Fs and an American Scarab. 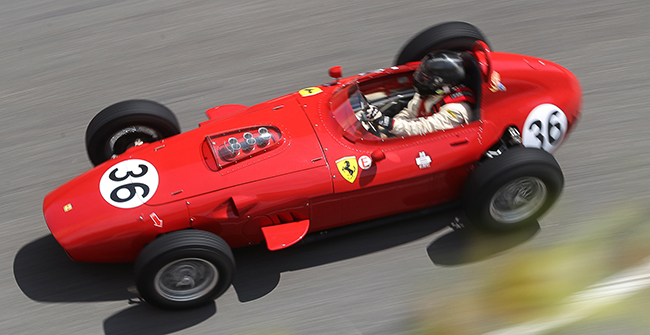 The C-series race was a tribute to the 1952 edition of the Monaco Grand Prix which was the only one held with sports cars since at that time there were not enough F1 cars in working order available. This year entries made between 1952 and 1957 were admitted.

The 340 MM of Roberto Crippa was a no show, but Arnold Meier brought his 225 Sport S/N 0168 ED. It finished 8th at the Sebring 12 Hours in 1958 with owners Peter and Robert Yung of New York City. Veteran vintage racer David Franklin raced it for Meier. Franklin is used to much faster cars but confirmed he still enjoys the challenge of getting the 225 Sport efficiently around the Principality’s streets.

The other Ferrari entry in the C-grid was the 1951 212 Export Touring Berlinetta S/N 0088 E of London-based Austrian Martin Halusa. Sold new to Italian privateer Augusto Caraceni from Rome and then soon passed to Count Antonio Naselli. Both used it very little in a handful of hillclimbs.

After a slew of Italian owners the, by then, very used 17-year-old car was bought by well-known California restorers Chuck Betz and Fred Peters in 1969. They kept it original until a complete restoration in 2008, after which it was sold in 2014 to Dennis Nicotra of Connecticut and a year later to its current custodian.

Luigi Chinetti then owned it for decades in NART livery before selling it in the 1980s to Louisiana’s Monte Shalett who used it for display only. It was then sold at the Christie’s Pebble Beach 2005 auction to collector Lawrence Auriana of Connecticut who had it reawakened after decades of slumber for vintage racing. Distinctive with its robin’s egg blue rims it is a Monaco Historic GP faithful and in the capable hands of Joe Colasacco has regularly threatened the hegemony of class ace Andy Middlehurst in his Lotus 25 Climax.

The problem is the peaky nature of the V12 makes it ill-suited to the tight city course, unlike the torquey Climax engine. Former Ferrari team leader and engineer Mauro Forghieri was seen giving it attention in the paddock in previous editions. Much testing had taken place this winter to prepare the car and indeed it seemed to bear fruit even if Middlehurst was on pole again and by a significant margin. 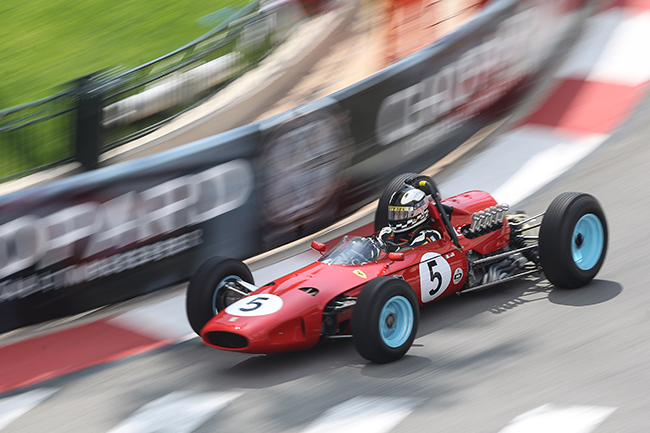 The E-grid was for the 3-liter F1 cars introduced in 1966 and allowed entries up to 1972. Three Ferraris were entered, starting with Italian broker collector Franco Meiners’ famous one-off Spazzaneve, a design study which never raced in period. It was hands down the best sounding car of the weekend, its V12 howl sounded just oh-so-naughty, like a Hollywood rendition except it was real.

A 312B was driven by former F1 driver Paolo Barilla, a car raced numerous times by Clay Regazzoni, winning at Monza in 1970 and second in Canada and Mexico. German collector Juergen Boden fielded a 312B2, also raced by Regazzoni but it was Jacky Ickx who won the 1972 German GP in it.

Grid F was for 3-liter F1 cars from 1973 to 1976 and two Ferraris, 312B3s, were entered. One for three-time Le Mans winner and ex-Audi driver Marco Werner was the actual car which Niki Lauda scored pole at Monaco in 1974.

The other one was driven by Max Werner (no relation), the young German hot shoe who for many years raced the Breadvan to great effect. The 312B3 chassis he was racing at Monaco saw Lauda finish second three times in 1974: in Argentina, Belgium and France. Amazingly it was Max’s first time in the car and first time ever racing at Monaco: talk about a challenge! A few days later on the phone he was still relishing the experience: “I felt like I was strapped to a 1000 hp cannonball trying to thread my way through a little maze! It takes a while to get used to what the car can and can’t do but following the Friday and Saturday practice sessions, on Sunday after a couple of laps I felt comfortable despite the fact we had a very wet track. I wish the race had gone on for another 18 laps as I was picking my way up the field. The engine was amazing; you could rev till 12,500 rpm and the gearbox was very smooth and nice to use. Regarding the circuit itself the most difficult corner is Tabac [the harbor left hander after the chicane] because it is quite quick and off camber which is why a number of people crash there. The tunnel is also much more of a corner than you think, not just a curve.”

Friday lunchtime saw yours truly getting a real treat, an on track ride in an O.S.C.A. Fissore spyder, one of two in existence. The car itself was just an eager, light little open top with barely 100 hp but the special part was to be on track during a race weekend. I have been around these streets numerous times however with traffic you don’t see the lines and the gradients, much steeper typically than TV shows and the cambers, oh the cambers...that bump to driver’s left they avoid on the way down from Casino square is a hill with its own zip code while there are endless variations in surface inclination which I was told actually pull the old front engine single seaters off line specially under braking, as if the car was magnetized by the barriers, and it wasn’t already hard enough work to keep it in one piece!

Monaco being Monaco one isn’t surprised to run into celebrities such as former team owner and F1 commentator Eddie Jordan whom I met one evening on the seaside, quick witted as ever. Another encounter, in the pits, was a major one and a big surprise: none other than Piero Ferrari. Very approachable and friendly he remembered Monterey 1994 as a highlight.

There was also the Porsche 70th anniversary tribute which prominently featured former Ferrari pilots Jacky Ickx, in the 1981 Le Mans winning 936 which looked absolutely gigantic and out of place in the tight confines of Monaco. Also, ex-Ferrari F1 and sports car great Derek Bell in a 1962 Porsche 804 F1 raced in period by another successful Ferrarista, the late Dan Gurney. In fact the popular Californian scored the only Porsche victory in F1 in that car at Rouen, France. So while Stuttgart may have more Le Mans wins, Maranello is in no danger on the F1 victory count. 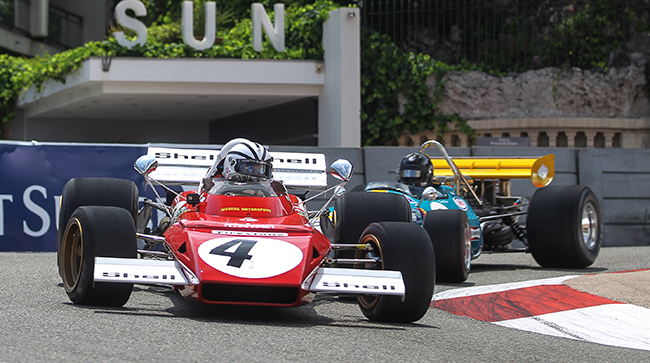 Sunday saw the races unfold, the weather stayed dry in the morning. Prince Albert made an appearance which he normally does not do during this weekend.

In the B-group Alex Birkenstock could not hope to be competitive against Lotus 16s (4 in the top 7) in a race won by a modified Maserati 250F and finished seventeenth.

In the C race won by a Cooper Jaguar, David Franklin came eighth in the 225 S, Martin Halusa twenty-third (of 28) in his 212 Export.

It must be said that driving standards were up compared to previous years. Drivers can’t be expected to be flawless in such a tight unforgiving environment and in fact each grid had a big handful of truly impressive drivers charging on as if their life depended on it. 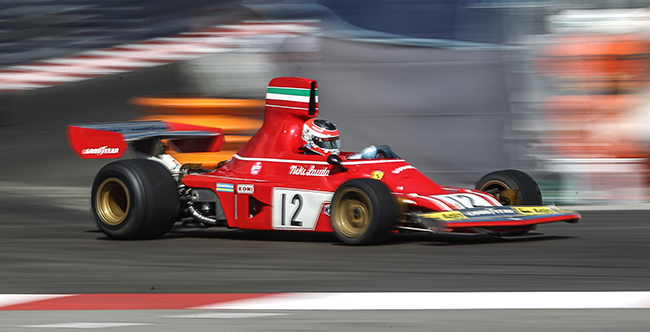 D-grid was the most anticipated one with Monaco master Andy Middlehurst in his Lotus 25 with Climax engine versus Maranello’s 1512 pedaled by Joe Colasacco. Colasacco did extremely well trying all he could to get past the Brit; the Ferrari was much more competitive this year and was all over the Brit again and again but Monaco is notoriously hard to overtake on and in the end he came up short...by six-tenths of a second at the flag, an amazing battle but at least he got fastest lap so you can bet Mr. Auriana will have the car and him back in two years.

Franco Meiners whipped his Spazzaneve to ninth in the E race, one place above Adrian Newey in his Lotus 49B. Boden and Barilla in their 312Bs finished thirteenth and twentieth. The latter was the victim of an on track assault as a competitor took him out on the downhill run from Casino square, blocked his overtaking attempt in the foulest way and sent him flying which is intolerable in historic racing. This was sorted out by the race stewards afterwards; that man won’t be invited again. Thankfully and amazingly the 312B3 had very little damage and Barilla was unhurt.

F-grid saw Michael Lyons win in a McLaren, a repeat offender in the Principality and very talented young man. One Ferrari 312B3 finished third; Marco Werner was on the podium. Max Werner after starting well down the order in a car and on a track he was unfamiliar with kept out of trouble unlike many others and finished sixth.

Attendance was 40,000 this year; a record, but still very manageable. There was never a feeling of being crowded, unlike the F1 weekend where one lives the sardine in a can experience all too much.

Festivities ended Sunday evening with a 1,000 seat gala dinner for drivers and teams at the Sporting Monte Carlo complete with awards ceremony, circus acts and fireworks.

A jewel in the crown of the International calendar, the Monaco Historic Grand Prix is now well and truly established after this 11th and best ever edition.