IS A DINO A REAL FERRARI?

The story of Enzo Ferrari’s son, Dino, has been told and retold. He was born in 1932 and was raised to be the heir of the Ferrari dynasty. He studied economics and commerce, and studied engineering, writing a thesis on the design of a 1.5 liter 4-cylinder engine with two intake valves and one exhaust.

The story of Enzo Ferrari’s son, Dino, has been told and retold. He was born in 1932 and was raised to be the heir of the Ferrari dynasty. He studied economics and commerce, and studied engineering, writing a thesis on the design of a 1.5 liter 4-cylinder engine with two intake valves and one exhaust.

Unfortunately Dino was stricken with Muscular Dystrophy. While Enzo’s son was fighting the disease he was kept busy with a project that would ultimately have long reaching effects on the future direction of Ferrari the manufacturer. 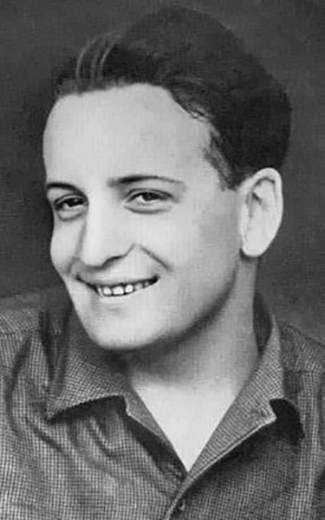 Racing has always driven Ferrari to develop and build machines that he thought would be winners. The FIA had decided that new Formula Two engine displacement rules for 1957 would be for unsupercharged engines of a maximum of 1.5-liters.

Dino Ferrari working with senior engineers under Vittorio Jano came up with a V-6 engine that would ultimately power the Ferrari Dino sports car and others too.

The notion of Ferrari building a V-6 engine is not difficult to imagine. In less than ten years Ferrari had developed the initial V-12 engine through its growing pains so that by 1956 it had become a full 3-liter engine and was on the verge of being one of the greatest engines of all time. Ferrari also had been racing a Lampredi-designed in-line four-cylinder quite successfully in both a 2-liter and 3-liter form. There was also an in-line six-cylinder; while not as successful initially, it would have had potential with more development.

Dino Ferrari, the son of the great Enzo Ferrari died in June 1956. Faced with this loss, Ferrari would dedicate the V-6 design to Dino and future V-6 engine cars would carry on the name.

The V-6 in Racing

The V-6 engine as a 156 was first raced at the Naples GP in April 1957 where it came in third place. The first victory was a mere three months later in July at Reims.

1958 would see the displacement increase to 2.4-liters and become the weapon of choice for Mike Hawthorne to win the World Champion title. 1958 would also see the Dino engine used in a sports racing chassis as the 296 S.

From 1959 through 1964 the Formula One races were fought with a Dino engine: some years with the 246 and other years with the 156 depending on the rules. The Dino would also be there for the transition from front-engine to rear-engine chassis. During the 1964 Formula One season a new engine was developed, the 158, this 1.5-liter V-8 engine would also carry the Dino name.

For 1965 the eight-cylinder engine would carry on until another change in displacement rules.

Sports cars also enjoyed the V-6 engine and became a contender in many races from 1959 through 1963. 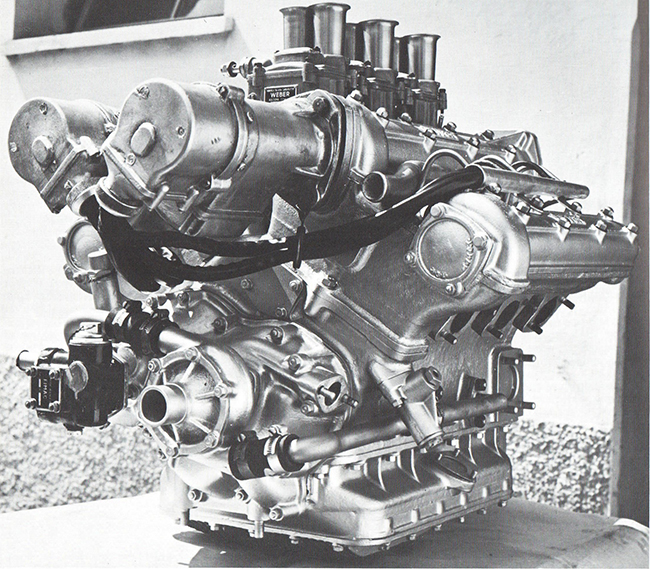 At this point some historical context should be explained. Ferrari had designed and built V-6 racing engines for nearly ten years. These engines had competed in Formula One, Sports Car Championships and hill climb events, all very successfully.

In early 1963 the production side of the business was demanding more and more time and energy. And money. Ferrari made overtures to Ford and negotiations began with Ferrari to sell the company. Ferrari wished to keep control of the racing and allow Ford to manage the production.

The marriage would not be consummated as Ford wanted more control of the racing department than Ferrari was willing to give. Ferrari would continue alone.

Enzo Ferrari was 65 years old in 1963 and he must have considered what would happen to the company he built. Racing was still one of his great passions but what could be done to make sure Ferrari could continue?

Ferrari would need Fiat; Fiat would want Ferrari but the timing would have to wait a little longer.

Back into Racing with the Dino

The little 166 Dino engine was pitted against its larger brethren among the endurance races throughout 1965 and 1966. While proving unreliable it did have some excellent finishes. Improvements came quickly with an increase to a full 2-liter capacity.

Also the 206 S was utilized in the hill climb championship for 1965, dominating the series in 1966, and remained very competitive well into 1969.

The Dino 246 also came back to Formula One in 1966. Paired with the 312 F1 cars the combination allowed better torque of the V-6 to shine on twisty tracks.

Ferrari was surely looking forward to utilizing the Dino engine in a production car. The 250 LM would not be homologated as a production Ferrari but the Dino could be produced at a lower cost and could be positioned as a complement to the larger cars.

Pininfarina was tasked with developing a design study to create a mid-engine automobile.  The 1965 Paris Auto Show would display the first of several attempts to solidify the design with the Dino Berlinetta Speciale.

This single car showed the direction of the future Dino. Smooth low fenders in front with good visibility and upright rear window. Engine was in the rear with side air intakes and truncated tail.

Further refinements would bring the show car closer to a production-ready Ferrari. Another prototype was shown at the 1967 Turin Auto Show; this time the 206 GT was much closer to the soon-to-be production variant.

Finally the finished Dino 206 GT was unveiled at the 1968 Paris Auto Show next to a Daytona on the Pininfarina stand. This was Ferrari’s first production mid-engine car.

1965 Ferrari brings Fiat to the table

The Formula Two rules for 1967 would require the use of a production engine. This rule would require 500 units to be built, a task that was far greater than the factory had the ability or funds to accomplish.

In March 1965 it was announced a collaboration with Fiat to build a V-6 engine. This was the racing engine essentially the same design as had been used for the sports prototype cars.

Fiat commenced reliability testing of the 206 engine. Aurelio Lampredi, who had been with Fiat since leaving Ferrari many years earlier, needed to strengthen and tweak various aspects of the Ferrari designed engine to make it suitable for a street car.

The collaboration between Ferrari and Fiat extended to Fiat being able to develop its own upscale line. Pininfarina designed an attractive spyder and Bertone created a fastback 2+2 coupe. Both of these Fiat versions made their debut at the November 1966 Turin Auto Show.

While the Fiat models were all Fiat, Ferrari had a hand in drivetrain design and chassis were refined by Ferrari test drivers. The conventional layout with an engine up front, transmission behind and solid rear axle unit were used by both the coupe and spyder. All of the mechanical components were identical; the body manufacturer and shape were unique to each car.

The Ferrari Dino differed greatly from its Fiat counterpart. The Ferrari design was a mid-engine design and the engine was mounted transversely on top of a transaxle creating a compact engine and gearbox assembly.

The new 1968 206 GT would be built at the Ferrari factory using all Ferrari designed and sourced parts save the engine which was built and assembled at Fiat and shipped to Ferrari.

The all-aluminum block proved to be weak and also underpowered at 2-liters. A new block was made with cast iron and increased to 2.4-liters. This was only one of the changes; others being steel body and revised interior and other detail differences.

Ferrari turned 71 years of age in 1969. He also went to Fiat to meet with Gianni Agnelli in Turin. The collaboration was now turned into a partnership with Ferrari selling 50-percent of his business.

Fiat would be in charge of the Grand Turismo production while Enzo Ferrari would retain the racing division. Mr. Ferrari would be president of the company and Fiat would appoint a general manager and managing director.

From 1969 Fiat would have more influence on manufacturing and production. Decisions regarding the direction of the company, models made, quality control and engineering would now be under Fiat control; surely Ferrari had some influence, but it would be Fiat driving the future.

Conclusion - Is a Dino A Real Ferrari?

The simple answer is “of course”.

Ferrari first designed a V-6 engine in 1956 and has raced a V-6 engine nearly continuously from that time up to and after the Ferrari Dino road cars were being manufactured.

The 206 GT engine was built by Fiat to a Ferrari design. Lampredi, who had previously worked for Ferrari famously creating the normally-aspirated V-12, Tipo 275-340-375 engines and further developed Columbo’s original 125 into the 250 GT, was the one engineer to revise the racing engine for street use.

While all the part numbers related to the 206/246 engines are Fiat part numbers, the exhaust valves have always been Ferrari part numbers. Many of the Fiat-built engines have components that can directly transfer to the original 206 S Dino engines. This proves the engines are not Fiat but are truly Ferrari engines.

Ferrari Dino automobiles were designed and built before Fiat had any influence or stake in the company.  Ferrari designed all the components, transaxle, suspension, and other mechanical components. All the part numbers related with the 206 and 246 GT automobiles are Ferrari numbers.

I tried to find the original quote “The Dino is almost a Ferrari.” This reference seems to be the one most point to claim the Dino is not really a Ferrari. I read through several in-period reviews and could not find the source. Regardless, it would seem this single quote is grasped upon to support the not-a-real-Ferrari argument.

The other point often made is the lack of Ferrari emblems and the claim Enzo Ferrari did not think the Dino was really a Ferrari. A real Ferrari could only have a V-12. Some of that is true, but the Dino is homage to Enzo’s son.

Dino is displayed in all the places a Prancing Horse would normally be. Nose emblem, hubcaps, horn button and Dino script displayed on the rear panel. USA cars are the only ones that identify the manufacturer on a data plate attached to the door jamb and that plate clearly identified Ferrari.

Was the Dino a departure from normal Ferrari automobiles? Yes, but does that make it less than a Ferrari? Ford has Mercury, Honda has Acura, and these are just two examples of other manufacturers expanding their product lines. Ferrari was doing the same.

The wisdom of Ferrari creating a separate and parallel automobile, not to compete with, but to complement his existing V-12 cars, was shear genius. The backlash against the Dino must have hurt Ferrari deeply for the replacement 308 GT/4, which started as the Dino replacement, was changed to have the full Prancing Horse emblem treatment.

The new V-8 cars, of which Ferrari also had a rich racing history, had originally carried the Dino name and would carry on with Ferrari, not Dino, identity.

As we look at Ferrari automobiles being produced today, the V-8 has continued to be a major portion of production. Ferrari continues to build V-12s, the ultimate in power and prestige. It also builds V-8s, while no less powerful, they still will never measure up to the legendary twelve-cylinder cars.

Imagine what Ferrari would think today if he could look down and see how popular his Dino 488 GTB and Dino Portofino had become?

Enzo Ferrari would have liked to see his son be honored so.