Oh, how I love to go to Monterey for Car Week. There are few places in the world where seeing a stock Lamborghini or McLaren becomes not even worthy of turning to look. Even a Pagani hardly registers as it passes by.

Oh, how I love to go to Monterey for Car Week. There are few places in the world where seeing a stock Lamborghini or McLaren becomes not even worthy of turning to look. Even a Pagani hardly registers as it passes by.

I notice every Ferrari; but then again I am wired to do so. A pink foil-wrapped FF is hard to miss. So are the multitudes of 458s, 488s and F12s running everywhere you look.

I haven’t had the chance to count the Ferraris at Concorso; I have downloaded the 1,200 photos Linda took. I estimate with four pictures per car and I know we didn’t get every single one, there must have been 300-plus Ferraris on the grass at Bayonet & Black Horse Golf Course.

While red is the predominant color there are many others to help fill out the entire palate of colors Ferrari offers. Combined with the different interior options it is surprising how few of the cars were identical.

As I walked among the 328s I saw a name I recognized right away, Kurt Apen. As one of the sons of FAF founder, John Apen, I had to stop and talk. Kurt appreciated the obit we published a few issues ago for his father. Kurt and I have had a few adventures while at FAF and one day I may need to relate some of those stories. It was cathartic to do some serious reminiscing.

Another interesting Ferrari was a 275 GTB/4 owned by Tom Mingle. He has owned this Ferrari for 40 years. It has the original paint; not perfect paint, but it is original. The wheels were a little rusty; the knockoffs matched the wheels. The interior was obviously well worn; the carpets ratty. Everything about this car looked like a barn find.

My first clue about this owner was the California FasTrak transponder attached to the window. Mingle opened the hood for me and the engine was spotless. The Patrick Ottis engine looked like it could have been a concours winner. Mingle had the engine and transaxle redone along with the suspension. Mechanically this Ferrari was perfect. It was clear this owner understood his priorities. Drive and enjoy, drive everywhere and enjoy. Rock chip? Who cares! Enjoy the journey.

If it was restored and perfect he would not want to drive his 275 GTB/4 every day. So he doesn’t worry about it and has a permanent grin from driving one of Ferrari’s creations more miles than most would drive in a lifetime. 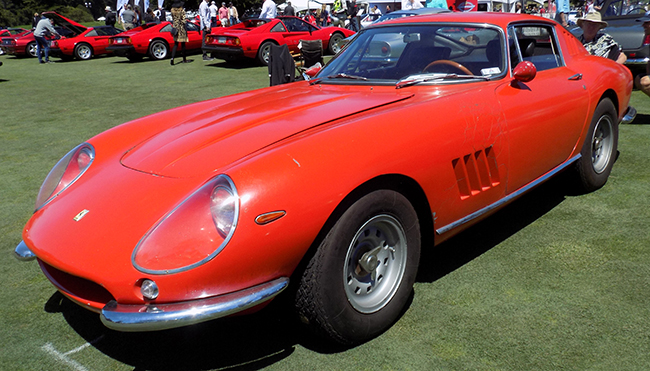 At the other end of the show Ferraris was Ron Corradini’s 250 GT PF Cabriolet. Completely restored, it looked gorgeous in Grigio Fumo and tan interior. It appeared to be perfect in every respect and the judges must have thought so too. Corradini won Consorso Italiano Best of Show with a Ferrari that was truly exceptional. 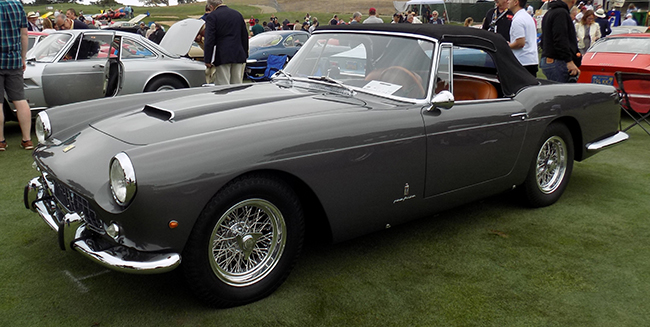 Monterey week has many different car events to attend. We arrived on Thursday with the anticipation of getting into The Quail on Friday. Unfortunately the expected passes had not come through; it appears the Quail’s popularity has grown so much they didn’t need the editor from the Ferrari Market Letter to cover their event. Instead we filled the day with the Gooding auction preview and RM Sotheby’s auction preview.

The auction previews are not usually on the list of events we cram into the four short days we are there. Both previews allowed a long and thorough look into each Ferrari including opening hoods and crawling under to photograph those precious numbers off the engine, transaxle and dataplate.

One of the cars at Gooding has a personal connection. 250 GT LWB Spyder California S/N 1055 GT was a car FAF restored in the late 1970s. I was taught valuable lessons from an old-world mechanic regarding how the front suspension worked and how to adjust the alignment on those 250 GTs.

It has been restored several more times since then and today looked resplendent in shell gray with tan interior. Touted as owned by Gerald Roush, I know he was only the go-between from the sales lot in south Alabama to Ewing Hunter, one of the principals of FAF. I guess famous ownership is significant even if that ownership is counted in hours not days or years.

Among all the Ferrari-centric events there are other marque-specific and similar shows. If you like exotics, not just Ferrari, there is an exotics-only show. Porsche has their own gathering. Japanese cars gather together in another lot, so there is plenty to see if Ferrari holds only part of your interest.

For fun we stopped by the Concours d’Lemons. Here is the first car you ever owned. And it looks like that first car if it was still running many years later. Shiny paint is merely by accident. Rust is preserved, even revered. The uglier, the better.

I never knew I own so many award contenders; it’s probably good it is too far to ship my Datsun pickup truck next year. Worst of Show went to an Enzo look-a-like that was made from some unknown donor car. Maybe Ferrari expert Carini was asked to judge that one! 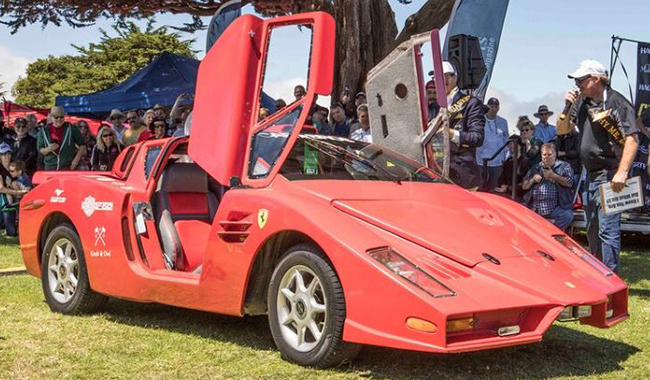 From one extreme to another the Pebble Beach Concours d’Elegance does not have automobiles with rust, dents or deferred maintenance. At least not in the Ferrari classes, although I did peek through the Pre-War Preservation class and see several automobiles that clearly had not been restored. I was truly amazed to see these examples and realize how well-preserved a 100-year old car could be.

In the Post-War Preservation class I ran across a silver 275 GTB/4, owned by Oscar Davis. This car has not been restored and looked very original. It is hard to believe the paint could have held up this long but with 8,000 miles and a short list of owners it certainly has the right provenance to be original. The judges liked it so much it won 2nd in the Preservation class.

The Ferrari classes are divided into Competition and Grand Touring. The competition class contained a range of Ferraris, from Michael Leventhal’s white and blue 340 MM Vignale Spyder S/N 0324 AM to Jim Glickenhouse’s 412 P Berlinetta S/N 0854.

The rest of the entrants included a 250 GT LWB Berlinetta S/N 0909 GT in silvergray with a French tri-color stripe presented by David MacNeil and two Monzas.

The original color scheme of white with a distinctive blue triangle on the nose repeating itself on the tail gave this racer a vintage 1950s look. With few historical owners and the incredible original preserved state, this Monza won 1st in class. 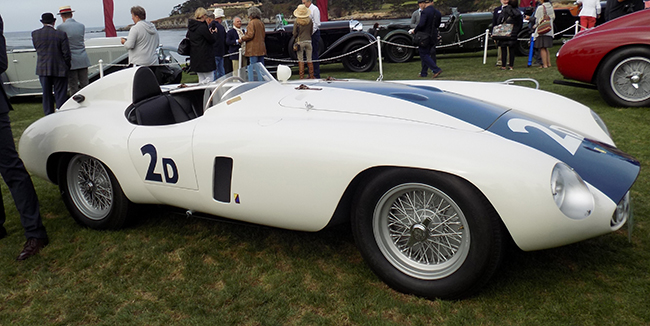 The other was a 735 Sport. Originally sold to Alfonso de Portago and raced by him in the 1954 Carrera Panamericana and Bahamas. It was then sold to Sterling Edwards and enjoyed a successful career racing throughout 1955 and 1956. Today it is presented in its Mexico racing livery of black with red Mobil Oil flying horses adorning the nose. Restored by Bob Smith for owner Tom Peck, S/N 0428 MD looked ready to tackle that grueling race once more. It won 2nd in class. 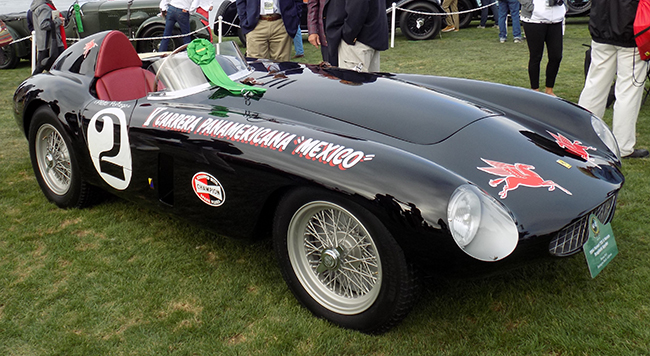 The last car in this class was a special 375 Plus S/N 0384 AM. The history of this car will fill a book one day. One of six Pinin Farina spyders built, one of which was destroyed in the 1954 Mille Miglia. Of the remaining five this racer enjoyed a career terrorizing the east coast throughout 1955 and 1956.

Like many old race cars this one was put out to pasture in 1957, literally. It was stored outside for nearly thirty years whereupon it was stolen and spirited to Europe. Needless to say after a long court battle between owners the car was sold at auction and purchased by Les Wexner.

Today after many years this incredible machine was able to debut to the world with its sullied history behind it and start a new chapter.

I wish I had been there when it was started to hear the mighty 4.9 liter shake the ground. This 375 Plus won 3rd in class. 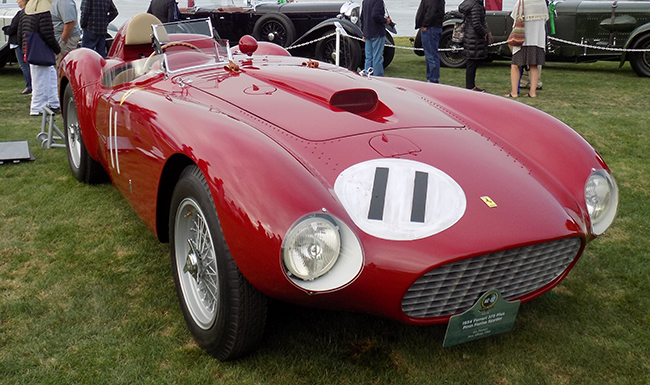 The Ferrari Grand Touring class had a great selection of Ferraris. David Nelson brought his 212 Inter Ghia Coupe S/N 0145 E. This car was purchased from a junkyard in 1989. Nelson has worked tirelessly to get this Ferrari back into original condition. Much had to be found and much had to be researched to get everything correct. As Nelson said “just being here after the long journey makes me a winner”. A true Ferraristi he is.

First in class was a 250 GT LWB Spyder California S/N 1685 GT, owned by Lee Herrington. Its gold color with tan interior is a great combination. It is great to see these Ferraris in other colors than red. 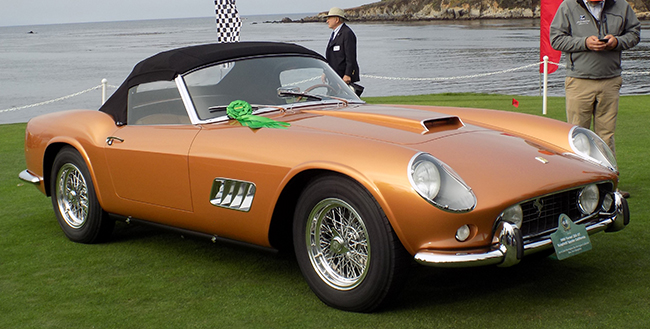 Second in class was Jim Patterson with a 400 Superamerica S/N 2373 SA. I don’t usually choose a favorite but the Azzurro Reale green metallic paint and tan interior struck me as the most beautiful car there.

Third in class was a 250 Europa GT S/N 0407 GT from the Pegasus Collection. This Europa has many special details. While all the Europas could be customized, this one in silver with red interior also had rear wipers for the back window and a unique grille. The typical egg-crate grille was replaced with a chrome surround; the driving lights mounted in the grille area are tied together with a simple chrome bar and a large prancing horse is set in a central chromed circle. Very elegant indeed. 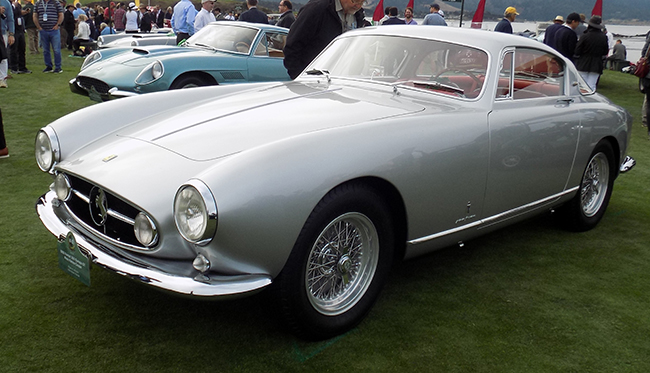 Before I close I should talk about the 90th Anniversary Ferrari display. Ferrari brought together 65 significant competition machines from all eras to celebrate 90 years of Scuderia Ferrari.

Set up on the first fairway each Ferrari was accompanied by a plaque identifying the car along with the year and serial number. Starting with the earliest Ferrari S/N 004C, a cycle fendered 166 Inter Sport-Corsa.

As you walk around the circle of Ferraris you can follow the evolution of racing. The first racing Ferraris appear to be basic street automobiles modified for racing. As the decades move forward the cars take on a more specialized appearance.

A 166 Inter looks like it could be driven daily whereas the 512 BB/LM doesn’t give the same impression. All-in-all, it was an impressive group of Ferraris comprised of sports cars, Formula One cars and current IMSA endurance cars.

Of course any gathering of Ferraris by FNA must include the current new-car line up. There was a Portofino and a GTC4Lusso. Also an 812 Superfast along with other cars; a Pista Piloti, F8 Tributo and SF90 Stradale. All were available for up-close inspection.

Monterey offers so many events there is a reason it’s called the greatest car event in the world. It’s not just one event, it’s the collection of different kinds of events that culminate with the best gathering of automotive excellence in the world in one of the most picturesque places on earth.