Some Ferrari events are insular; that is, run by club members for club members. Then there are concours, with some tickets for non-entrants running as high as $700 plus. But one of the best Ferrari events in Southern California is laudable because it is 100% free to the public.

Some Ferrari events are insular; that is, run by club members for club members. Then there are concours, with some tickets for non-entrants running as high as $700 plus. But one of the best Ferrari events in Southern California is laudable because it is 100% free to the public.

The show called “Ferraris on Colorado”, takes place on Colorado Boulevard in Old Town Pasadena, CA, a street with lots of half century or older buildings set midst palm trees, the scene oozing ambiance from every pore.

It is produced by the Southwest region of the FCA.

Over 100 cars were accepted, and they ran the gamut from a very early Barchetta, to the very latest (I didn’t see a model badge but was told it was an 812 Superfast, shown by David S.K. Lee).

Not really sneaking in, but good they were there to see if the challenger (for the same market segment) is up to snuff, were two Aston Martins, which looked damned good.

I was surprised when one of the organizers, Wally Clark, told me they didn’t really need Rolls and Bentley dealers showing their wares as in prior years, because although the show is free, there are some expenses to the sponsoring clubs.

Fortunately there were shops that were paying for booth space, among them the restoration shop of Fast Cars and the Los Angeles shop, GTO Engineering.

This show is a great opportunity for a shop to show a car-in-progress and Craig Calder of Fast Cars, Ltd., had a Daytona Spyder, restoration “almost done” where I prefer to see them stripped down, earlier in the process.

Also with a booth was Fast Toys, where you can arrange to drive on tracks like Fontana, with your exotic car.

There were, as far as I know, no replicas, unless you want to count the ersatz early Testa Rossa fielded by Peter Giacobbi. Peter carefully selected the parts to build his dream roadster, including a real V12, and found a local craftsman near Orange County, CA, who could work a body in aluminum that looks like it’s ready to go to the test track.

Actually Giacobbi found the body in Italy years ago but it took a local craftsman from Southern California to get it re-engineered to fit the chassis they prepared.

Giacobbi worked in Italy decades ago and used to buy Ferraris for a few thousand, so by building this car he’s recalling his days of glory.

1960s favorites included a silver 250 SWB Berlinetta, a black 275 GTS with a lift-off hardtop, said to be once Bill Harrah’s car when he distributed Ferraris. There was a 250 GT Series I Cabriolet and a 400 Superamerica in silver. There were many 308s in different flavors and a large number of 360s and F430s. 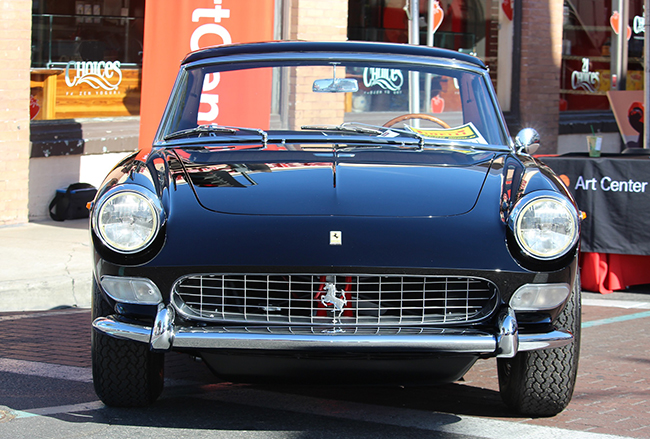 They were a little short on Daytonas; I myself saw only one and Craig Calder’s Fast Cars, Ltd., had the only Spyder, but that’s the way the show is, some cars appear one year and then don’t the next.

One wild car was Tony Shooshani’s black LaFerrari Aperta. David S. K. Lee was not afraid to experiment, showing a 246 Dino with a larger 3.6 Ferrari V8 stuffed into it, in a car that weighs but 2,500 lbs.!

You don’t see Ferraris painted up in wild paint schemes but there was one that seemed to be in camouflage. I couldn’t catch the product it was promoting.

I searched for a 400GT or 400i or 412 cut into a Cabriolet but no luck. Could it be cut cars are discriminated against? Maybe nobody with one applied...

In sum, this is what I consider good PR event for the marque, and for Ferrari owners as it allows the general public a chance to see the cars at no cost, and creates new fans.

I didn’t stay until the end but I am sure this event is not plagued by the roaring-off antics that have doomed many Cars ‘n Coffees in Southern California. An event with this much class and in such wonderful location wouldn’t act like that.

THE AUTHOR: Fine artist Wallace Wyss is making available a list of his Ferrari prints from his original paintings. Write Photojournalistpro2@gmail.com.