FERRARIS IN THE 2019 KISSIMMEE AND SCOTTSDALE AUCTIONS

There were nearly 3,500 cars at Mecum’s monster Kissimmee auction in January, a ten day Lollapalooza that offered something for everyone and any size pocketbook.

There were nearly 3,500 cars at Mecum’s monster Kissimmee auction in January, a ten day Lollapalooza that offered something for everyone and any size pocketbook.

There appear to have been 28 Ferraris in total; 21 of them were observed and noted in detail.

Here are the transaction reports from Kissimmee.

That’s not an oversight. There is nothing to report. Over four weeks after the last hammer fell in Kissimmee, Mecum has yet to provide a detailed list of results.

Out in Scottsdale a week later it was a different story. Barrett-Jackson turned a complete, detailed results list around in three days. RM Sotheby’s, Gooding & Co., Worldwide and Bonhams posted their results on their websites, usually in real time. Russo & Steele is the outlier here where there is only a summary total without a breakdown for individual transactions.

Fourteen Ferraris brought high bids of $1 million or more. Eight of them sold for a total of $30,592,500, accounting for 63.2% of all million dollar transactions in Scottsdale.

RM Sotheby’s would have captured the top spot if the sale of the Lilian de Rethy 250 GT SWB Pinin Farina Coupe Speciale S/N 0715 GT had closed at or above its reported high bid of $7.5 million, but close counts only in horseshoes and hand grenades.

It was a difficult year for expensive cars in Scottsdale. 30 lots had hammer bids of $1 million or more. 17 of them sold bringing a total of $46,935,000. Two were charity sales at Barrett-Jackson, the first production 2020 Toyota Supra (sold to a Toyota dealer for $2.1 million) and the first 2019 Ford GT in Heritage livery sold for $2.5 million.

Farther down the value scale sales were more plentiful even though prices were muted with the expected winners and losers.

250 GT LWB BERLINETTA, S/N 1037 GT (1958). Red with cream leather. Estimate $5.75 million to $6.5 million. Older restoration, 2- condition. Hammered sold at $5.35 million plus commission of 10.09 percent = final price of $5.89 million. Single-sail panel louver, covered Marchal headlights and fog lights, bright front fender vents, outside fuel filler. Delivered new to Venezuela and driven to 2nd place in the 1958 GP of Venezuela. Restored in the 1990s. Classiche Red Book certified. Despite the age of the restoration its condition is nearly impeccable, with quality paint, flat panels, even gaps and flush fits. An outstanding Ferrari with a superbly maintained older restoration. This is a complete, desirable, Classiche certified 250 GT TdF and even has a spare engine. It is a sterling value at this result. Lot # 028. Gooding & Company.

250 GT PF COUPE, S/N 1315 GT (1959). White with black leather. Estimate $600,000 to $700,000. Visually maintained, largely original, 3- condition. Hammered sold at $540,000 plus commission of 10.93 percent = final price of $599,000. Borrani wire wheels, woodrim steering wheel, original books and tools. Two owners from new. Rough older repaint with heavy cracking. Some major chip repair is evident and there are excessive unrepaired flakes on rear lower valance. The wheels are heavily oxidized. The front bumper was polished and shows well, as do the headlight surrounds. The other trim is notably oxidized. The original interior is aged but fair. The windshield glass is starting to delaminate in front of the driver. The underbody looks a little rusty and oxidized with some minor rot issues possible. The engine bay is dirty, but no excessive leaks or issues evident. Original other than a repaint, it’s a decent but not quite ideal candidate for restoration. There was a time when these handsome Pininfarina coupes were cut apart and turned into Testa Rossa replicas, but no more. The result here recognizes both the car’s condition and its desirability. It’s not going to be rebodied, that’s for sure, and unusually for a Gooding auction it doesn’t appear to have any originality premium despite its extensive preservation. Lot # 153. Gooding & Company.

330 GTS, S/N 10773 (1967). Dark red with black leather. Estimate $2.2 million to $2.5 million. Cosmetic restoration, 3+ condition. Hammered sold at $1.825 million plus commission of 10.27 percent = final price of $2.012 million. Borrani wire wheels, Michelin XWX tires, Blaupunkt multiband radio, power windows, air conditioning. Old undercoat in the wheel wells. Good older paint, chrome and interior showing negligible use or age. Good gauges and dash but scratched power window switch escutcheons. Classiche Red Book certified. Represented as 33,766 km from new, repainted in the mid-90s and thoughtfully preserved since. For a 330 GTS that has never been restored and went through the early 1980s anguish of being stolen from Paris and then fraudulently sold in Florida this is one heck of a car and worth every dollar of the moderate price it brought. Lot # 142. RM Sotheby’s.

365 GT 2+2, S/N 13139 (1969). Amaranto with black leather. Estimate $175,000 to $225,000. Visually maintained, largely original, 2- condition. Hammered sold at $177,500 plus commission of 12 percent = final price of $198,800. Borrani wire wheels, Eagle GT tires, ANSA exhaust, woodrim steering wheel, Blaupunkt pushbutton radio, air conditioning, power windows, tools, jack, Massini documented. Mostly original paint with several small cracks below the left A-pillar and another at the bottom of the hood. Good chrome. Very good older original interior. Slight dullness to the wheels. The exhaust looks a little rough but the car is mostly tidy underneath. An unrestored but maintained and attractive ‘Queen Mother’ Ferrari. Purchased by the seller for $144,500 at Bonhams Quail Lodge in 2007. This isn’t much of a return, especially given the changes in the vintage Ferrari market since 2007. From the perspective of the seller, though, project car money was paid for a commendably preserved mostly original example. Lot # 026. Bonhams.

365 GTB/4, S/N 14279 (1971). Giallo Fly with black leather. Estimate $675,000 to $750,000. Older restoration, 3+ condition. Not sold at hammer bid of $600,000. Alloy wheels, Michelin XWX tires, popup headlights, Becker Mexico cassette stereo, Veglia air conditioning, power windows, Marelli ignition boxes. Very good repaint, even gaps and flush panel fits. Comfortably stretched upholstery. Good chrome and glass. Older underbody undercoat. The orderly but aged engine compartment with some peeling old paint houses an uprated engine estimated at 400 hp. In early 2019 this is an entirely reasonable offer for a Daytona, even one as well-equipped as this, in this condition. The market for Daytonas isn’t what it once was, there are plenty available and supply and demand still works. It would have been reasonable for Worldwide to take the reported high bid (if it came from a money bidder) and share some of the BP with the seller to make the deal work. Lot # 30. Worldwide Auctioneers.

365 GTB/4, S/N 17607 (1947). Black with dark red leather, black strips. Estimate $575,000 to $675,000. Visually maintained, largely original, 3 condition. Hammered sold at $520,000 plus commission of 10.96 percent = final price of $577,000. Cromodora alloy wheels, Michelin XWX tires, painted nose panel, popup lights, Grundig cassette stereo, power windows, Veglia air conditioning with dash-mounted control panel, accessory volt and outside temperature gauges, headrest seats. One owner until 2014 and 85,172 km from new, the fifth from last Daytona built. Engine and gearbox replaced years ago. Good chrome, interior and quality new paint. Old undercoat in the wheelwells. Clean but disturbing under the hood with incorrect air cleaner cover nuts and bad wiring repair with crimped connectors and exposed conductors. The bottom of the engine compartment and chassis are road grimy. Nice paint, but the rest isn’t up to its standard. Classiche Red Book certified. Sold by Bonhams at Goodwood in 2014 for $612,406. Then sold by Gooding at Pebble Beach in 2015 for $715,000. It has added only 55 kilometers to the odometer since then but lost $38,000 in market value at this result, about in line with Daytonas’ track record over the past 3 1/2 years. Lot # 124. RM Sotheby’s.

512 BBi, VIN ZFFJA09B000043859 (1982). Rosso Corsa with tan leather. Estimate $250,000 to $325,000. Unrestored original, 2 condition. Hammered sold at $210,000 plus commission of 12 percent = final price of $235,200. Alloy wheels, Michelin TRX tires, leather-wrapped steering wheel, Pioneer CD stereo. Showing 4,895 km and represented with a recent engine-out service. Subtle delamination on the left side of the windshield. Flawless, well-kept paint. Very good interior. All the plastic is bright. About as close to a new BBi as can be found. The new owner should be happy as well as with the price paid for it, a modest one considering its low miles and careful preservation. Lot # 064. Gooding & Company.

F512M, VIN ZFFVG40A0S0100380 (1995). Rosso Corsa with beige leather. Estimate $325,000 to $375,000. Unrestored original, 2 condition. Hammered sold at $320,000 plus commission of 11.56 percent = final price of $357,000. Modular wheels, Michelin tires, power windows, air conditioning. Two owners, the present owner since 1998, and 24,487 miles. Religiously maintained with belt services every five years, the most recent being two months ago. Essentially impeccable with only slight stretching on the driver’s seat and a lightly scuffed seat bolster. The engine compartment and underbody are like new. It would not have been unrealistic to see this exceptionally well-maintained example of the ultimate Testarossa variation bring more than the result here, but in the end the transaction is fair to both parties. Lot # 261. RM Sotheby’s.

456 GTA, VIN ZFFWP50A7W0110808 (1998). Blu Pozzi with tan leather. Estimate $45,000 to $65,000. Unrestored original, 3 condition. Hammered sold at $44,000 plus commission of 12 percent = final price of $49,280. Ferrari stereo, black calipers, 5-spoke alloy wheels, Michelin Pilot Sport tires, air conditioning. Other than a few little nose stone chips and some wear on the driver’s seat this is a clean, orderly, used car with only 19,114 miles but without any service history offered. A quick, practical, front-engined V12 with 442 horsepower and an original price of a quarter million dollars, depreciation (and subsequent more powerful and sophisticated models from Ferrari) have depressed prices to this level, a Ferrari for the masses, with room for kids in the back. The automatic? Well, it’s electronically controlled and as quick as the 6-speed, not to mention being ideal for commuting in heavy traffic. This result is reasonable, if a little generous considering the lack of service data. Lot # 113. Bonhams.

F12tdf, VIN ZFF81BFA3H0224226 (2017). Grigio Titanio with blue leather, blue-gray Alcantara. Estimate $950,000 to $1.1 million. Unrestored original, 2 condition. Hammered sold at $910,000 plus commission of 10.55 percent = final price of $1.006 million. Manettino steering wheel, carbon fiber interior trim, front fender ducts, splitter, sills and diffuser, SF shields, yellow calipers, air conditioning, Ferrari stereo. One owner, 280 miles, generously optioned (to the tune of $90K) and maintained like new, because it is and it is still under the Ferrari maintenance program until 2023. Breathtakingly powerful with 769 naturally aspirated horsepower and featuring sexy details like rear wheel steering to make it behave like a more nimble competitor. Only 799 were built and this one is buried in options, although many of them are carbon fiber bits meant to reduce weight. Still, it was about $500K new, making this result a serious price to pay for exclusivity. Its low miles are perhaps the result of its breathtaking performance where 280 miles might be all a driver could experience before concluding, “This is more car than this driver can handle.” Someone at the Arizona Biltmore was ready to take on the challenge, though, as this handsome price endorses. Lot # 144. RM Sotheby’s.

LAFERRARI  APERTA, VIN ZFF86ZHA2H0224581 (2017). Nero Daytona with black, red. Estimate $6.5 million to $8.5 million. Unrestored original, 2+ condition. Not sold at hammer bid of $5.5 million. Chipguarded nose, car cover, carbon fiber trim and roof panel. Excellent condition inside and out, as it should be given that it’s a two-year-old LaFerrari with 1,500 miles. The only LaFerrari, closed or open, in the Scottsdale auctions. People are still trying to figure out what they’re willing to pay for an open-top Ferrari with 949 hybrid-enhanced horsepower but $5.5 million seems about right. Lot # 154. RM Sotheby’s. 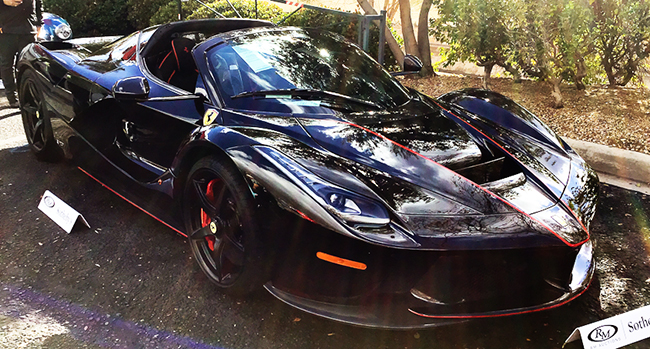