Indianapolis is not exactly the place where collectors think of going for a Ferrari and Mecum’s annual Spring Classic at the State Fairgrounds recognizes that fact with a fairly small, but growing, selection of Maranello cars.

Indianapolis is not exactly the place where collectors think of going for a Ferrari and Mecum’s annual Spring Classic at the State Fairgrounds recognizes that fact with a fairly small, but growing, selection of Maranello cars.

Several seem to be on the Mecum Frequent Flier program, appearing here and there at Mecum auctions either searching for an elusive bidder or using Ferrari’s halo-effect to draw traffic to the auction.

In Monterey, Scottsdale or Monaco Ferraris are the center of attention, attracting seven- and even eight-figure bids. In Indianapolis they’re window-dressing at a sale where Corvettes, Vipers, Impalas, Hemis and Galaxies rule the six day-long auction.

Just to put it in perspective, there were over 200 Corvettes at the Spring Classic, including a complete set of Corvette Indy Pace Cars, sixteen in all, that sold for $1,760,000.

What is apparent from the reports that follow and the numbers below, however, that as small as Ferrari’s presence is at the Spring Classic it is growing both in quantity and in value, particularly with the addition of late model limited edition Ferraris like the F12.

And while it would be reasonable to infer that the Ferraris lack of visibility among the crush of 1,850 vehicles on offer in Indianapolis might cause cars to be overlooked and good values, there were no bargains among the six Ferraris sold.

Here is the rundown. Andrew Newton was on-site to take notes while I recovered from jetlag after returning from Monaco. The final copy and comments are my responsibility.

A full report on Mecum’s Spring Classic in Indianapolis including reports on over 100 lots will soon be posted at rickcarey.com. 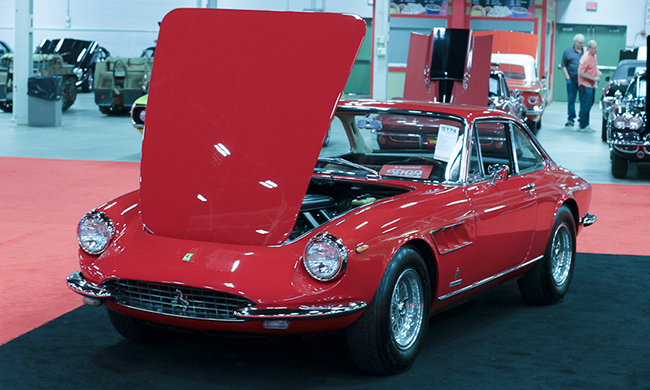 365 GTB/4 BERLINETTA, S/N 16701 (1973). Azzuro with black leather. Estimate $800,000 to $900,000. Visually maintained, largely original, 2- condition. Not sold at hammer bid of $660,000. Borrani wire wheels, Michelin XWX tires, Ansa exhaust, Becker Mexico stereo, power windows, air conditioning. Represented with a single repaint and as mostly original other than rebuilt suspension in 2015. Lightly scratched front bumpers. Good, shiny wheels with older tires. Handsome, mellowed interior that shows age but charmingly so. With everything underneath pretty much all original, it would be an even more compelling car with original paint. Reported sold for $770,000 in a post-block transaction after being bid to $660,000 at Mecum Kissimmee in 2016 where its odometer showed 17,361 miles against the 17,502 seen today. 141 miles is not enough to compensate for this kind of hit, even though the Daytona market today is not what it was even 16 months ago the seller could have given this offer serious consideration. It may take a few more trips across the block or ads in FML to reach the conclusion that this is a realistic offer, and that the 2016 transaction was expensive even for this Daytona’s originality and condition. Lot # S130. 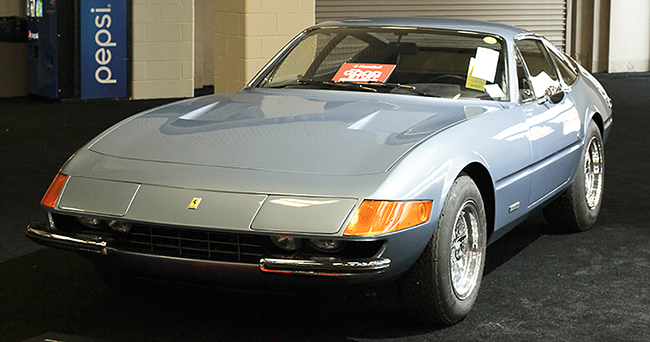 575M MARANELLO, VIN ZFFBV55A220129483 (2002). Silver with blue leather. Estimate $225,000 to $275,000. Unrestored original, 2 condition. Not sold at hammer bid of $160,000. Red calipers, luggage, roll bar, Daytona-style seats, shields, leather covered roll bar. The wheels were dirty but look like they would clean up fine. Otherwise it looks like a new car despite its 17,845 miles, and what really sets it apart is the 6-speed. Not sold at a $220,000 high bid at Mecum Los Angeles in February of this year, the offer here gives short shrift to the highly desirable 6-speed and was probably declined with little if any consideration. The LA bid is more realistic. Lot # S107. 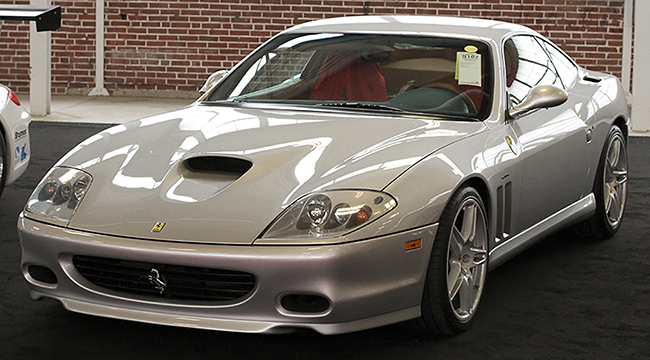 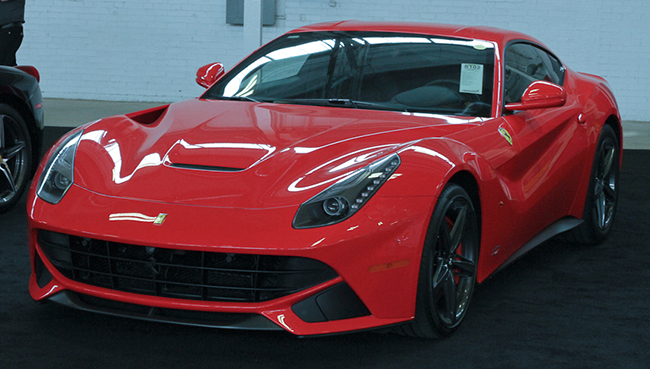 F12tdf, VIN ZFF81BFA7H0220566 (2017). Rosso Corsa with black interior. Unrestored original, 2 condition. Not sold at hammer bid of $1.05 million. Signed by Sebastian Vettel. Carbon brakes with red calipers, carbon Scuderia shields, tinted glass. 1,157 miles and like new, as it should be. Not sold at an even $1M at Mecum’s Las Vegas auction in November, then crossed the block at Kissimmee at the beginning of this year with a reported $1.1 million bid. Based on this history it seems to be on the Mecum “headline car” program and we can look forward to seeing it in Monterey. Lot # S101. 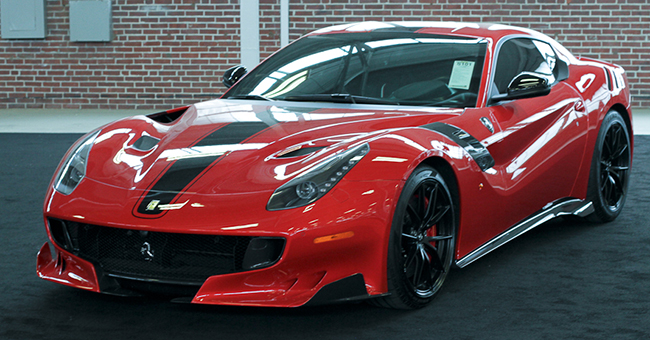 308 GTS, S/N 28725 (1979). Yellow with black, beige leather. Visually maintained, largely original, 3 condition. Hammered sold at $50,000 plus commission of 10 percent = final price of $55,000. Power windows, air conditioning, factory tool roll, aftermarket CD stereo. Quick touch ups on the vents behind the headlights. Body paint does not appear original. Chip on the right front fender and a large touch up on the passenger’s door. Scuff on the roof. Tired looking engine bay and underbody. A more desirable early carbureted 308, but that’s the only thing special about this car with no service history and mediocre presentation. Sold for $63,800 at Auctions America’s Santa Monica sale in June 2016, bid to $62,500 high bid at Mecum Monterey in 2016, to $60,000 at Dallas in November 2016, the same bid at Leake Dallas three weeks later, fell way short at Spring Auburn last year with a bid of $40,000, then sold for $48,950 at Fall Auburn last year and not sold again at a $50,000 high bid at Mecum Kansas City this year. It is long since past time to accept the judgment of the bidders and take money on the block, which this transaction represents. Lot # S241. 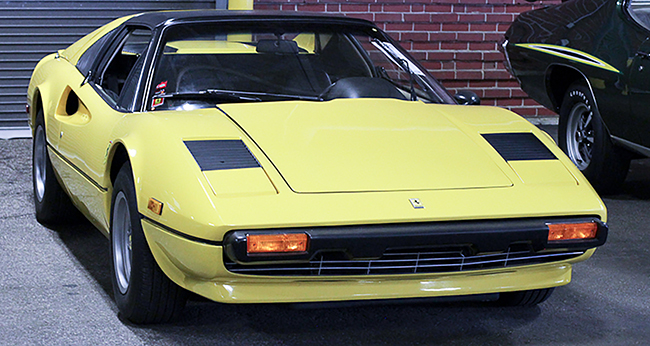 348 TS STRAMAN SPIDER, VIN ZFFFG36A3L0087079 (1990). Rosso Corsa with tan leather. Original, with non-original appearance items, 2- condition. Hammered sold at $50,000 plus commission of 10 percent = final price of $55,000. Speedline wheels, P Zero tires, power windows, air conditioning. Represented as the only 348 converted by Straman, but that is made less significant by the fact that Ferrari came out with their own 348 Spider and that this VIN decodes as a 348ts. Light wear to the driver’s seat, especially on the left bolster. Clean top. A few chips and scratches on the nose and bottom lip, but mostly decent original paint. Slightly dirty engine bay. No representation of service history. Showing 3,187 miles but looks used. Sold for $66,000 at B-J Scottsdale in 2016, then at Mecum’s Dallas auction last September for $56,100. Lot # F022. 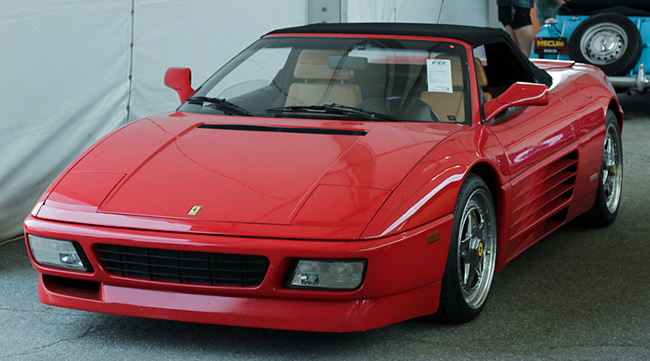 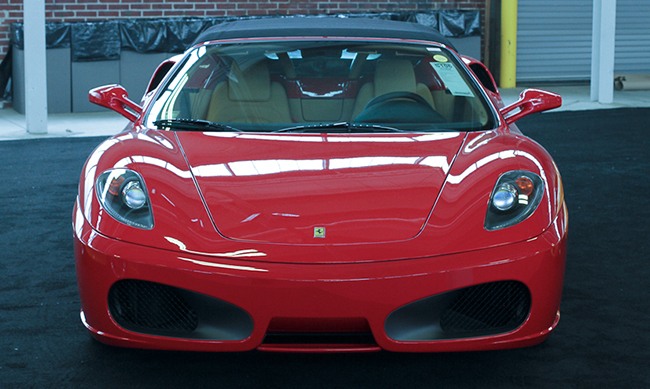 458 ITALIA, VIN ZFF67NFA5C0185896 (2012). Black with black interior. Estimate $175,000 to $225,000. Unrestored original, 2 condition. Hammered sold at $185,000 plus commission of 10 percent = final price of $203,500. Red calipers, Michelin Pilot Super Sport tires, carbon fiber engine cover, wing, diffuser and interior trim, front end lift, carbon brakes, backup camera, car cover, books, tools, battery tender, tire inflator. 566 miles, like new, and finished in a color that’s not red. Described as having $102,748 in options on top of an MSRP over $200,000. This is a menacing and purposeful automobile in black and its result here is depreciation only on the order of 35 percent from new, a realistic compromise between the startling options list and low miles. Lot # S103.

458 SPIDER, VIN ZFF68NHA0D0189415 (2013). Red with black interior. Unrestored original, 3 condition. Not sold at hammer bid of $110,000. Matte grey alloy wheels, SF shields, air conditioning. Rebuilt flood damaged title with no mileage or other history represented. Likely a Hurricane Harvey victim. Otherwise looks like the five year old Ferrari that it is. It takes a confident buyer with a good relationship with an experienced Ferrari shop to take on a risk like this, even for a car potentially worth a quarter-million dollars. That buyer was not in attendance in Indy. Lot # S265.