On December 3rd H.S.H. Prince Albert II of Monaco inaugurated a major happening, the Exposition Ferrari. It gathered no less than fifty major Maranello machines in the museum founded by his late father Prince Rainier in 1993 to house his collection started in the 1950s.

On December 3rd H.S.H. Prince Albert II of Monaco inaugurated a major happening, the Exposition Ferrari. It gathered no less than fifty major Maranello machines in the museum founded by his late father Prince Rainier in 1993 to house his collection started in the 1950s.

Sourced from the finest collections in Europe and beyond the assemblage of cars was A-list and featured an even and well-balanced mix of F1 cars, endurance sports prototypes, GT racers as well as road cars, from all eras.

Franco Meiners, the Italian dealer racer, was seen presenting some of the cars to the Prince and guests. His 1973 312 B3 Spazzaneve (snowplow design study) S/N 009 F1 car and 512 S S/N 1016 fitted with a long tail amongst them.

Most suitably for Monaco an extensive selection of the Scuderia’s F1 cars was displayed.

Oldest of these was one of monumental importance not only to Ferrari history but for Grand Prix history itself, Dino 246 F1 S/N 0007, the last ever front-engine car to win a GP and also the one which on that occasion saw Phil Hill win his first World Championship round, at the 1960 Italian GP in Monza, a year before he won the Championship.

That car later received a Testa Rossa V12 for New Zealander Pat Hoare who campaigned it successfully in the Gold Star series in the antipodes in his home country and across the water in Australia.

It later became a road car with a garish rendition of a homemade GTO body before being bought and restored by British vintage racer Neil Corner. It is now fitted with a Dino F1 V6 engine again and frequently seen in historic races.

Next chronologically was the 1967 312 F1 with amusingly the same chassis number S/N 0007 but both could not be more different, the dinosaur and the wasp.

These mid-to-late sixties F1s were so tiny that Derek Bell who raced them for the Scuderia in period mentioned he could barely fit inside when he drove it at Goodwood decades later, as he pointed out you get wider hips with age. This one was used by Chris Amon for the end of the 1967 campaign and much of 1968 during which his best result, during a difficult time for Il Drake and his troops, was third at Silverstone.

There were several retirements and Bell raced it at the end of the season at the Oulton Park Gold Cup - his first F1 race - and at Watkins Glen, neither of which he finished.

In 1969 it was bought by Pierre Bardinon as he built his extraordinary collection in central France. After breezing through a raft of other A-list collections it ended up with Todd Morici of New Jersey who campaigned and showed it often in Monterey and at the Cavallino Classic. 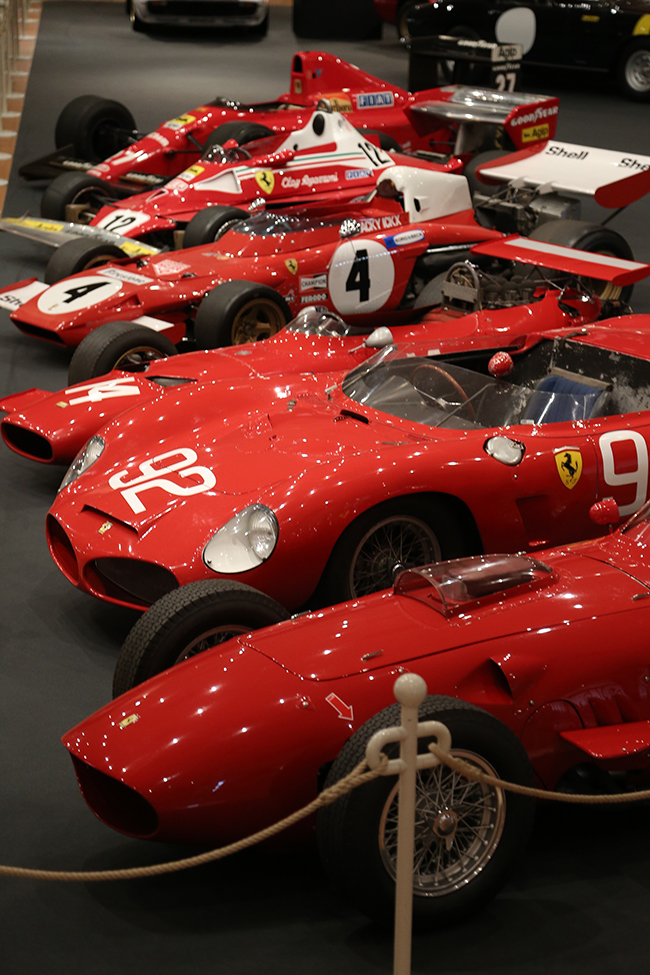 A 1971 312 B2 S/N 007 (yes, one wonders if the museum curator has a fetish for that number?!) campaigned by Mario Andretti and Clay Regazzoni yielded only one podium, a second place for the Swiss Italian at the German Grand Prix, illustrating Ferrari’s still struggling efforts but a new dawn was about to rise. It then went successively into the Bardinon and Setton collection.

After the design study Spazzaneve 312 B3 S/N 009 which, along with its well named front was never actually raced, came one of the most heralded and successful eras for the Scuderia’s F1 team: the renaissance years led by Niki Lauda.

This was illustrated by the 1974 312 B3 S/N 014 topped by that infamous tall air intake with which Regazzoni, the man who selflessly suggested the Commendatore hire Lauda, scored thee podiums that year and by consistently finishing in the top six was second in the championship that year, winning the German GP but in another chassis, while Lauda won the Spanish GP, his first ever F1 win, and also the Dutch GP.

A 1976 312 T2 was there to highlight the time when Lauda really broke through with the 312 T, winning  a hat trick of races the year before in the spring of 1975, appropriately starting in the Principality. The Austrian also won in Belgium, Sweden, France and the US, on his way to his first title.

A 1986 F186 S/N 091 harkened back to a difficult year when team leader Michele Alboreto, 2nd in the championship behind Prost the year before, could only summon one 2nd place whilst Swedish teammate Stefan Johansson had four third places.

The last F1 car shown was a 1989 640 F1 which was the first Ferrari GP car with paddle shifters. These were so unreliable that for the first race of the season Nigel Mansell had booked his flight back from Rio de Janeiro one hour before the end of the race...but for the first time ever after dismal testing it held together in the race...he hesitated about missing his flight but it was worth it: he won! The British lion won again at Budapest with an opportunistic pass of Senna while Gerhard Berger won in Estoril Portugal.

Oddly enough there were no more recent F1 cars but it seems this was a deliberate choice and a good one at that: F1 cars of the last three decades have received enough exposure and this display clearly wanted to highlight history.

So doing just that and moving on to sports prototypes we come upon one in amazingly original condition, a 1954 500 Mondial Pininfarina, S/N 0458 MD. 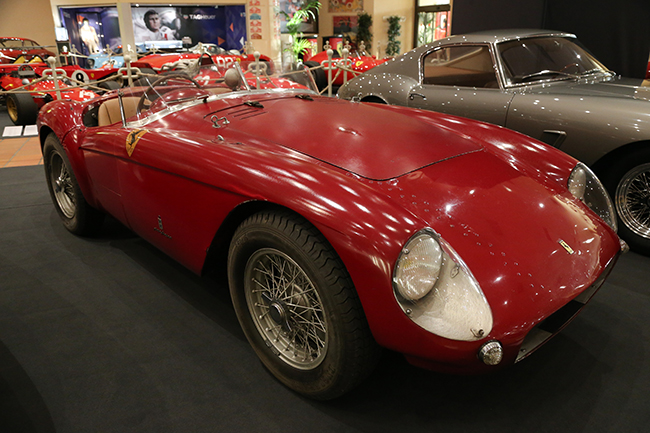 In its juice as the French say, it is refreshingly unrestored and well-known in the south of France as it is owned by a prominent collector from Nice.

Sold new to Italian privateer Cerrato it was eventually raced by Jean Guichet, the future Le Mans winner in some of his first Ferrari drives, he would finish 13th in it in the last Mille Miglia in 1957. It then languished for decades in Marseille hence the originality and was thereafter displayed for years in the Musee de l’Automobiliste in the south of France.

A true dinosaur was next: 857 S Monza S/N 0584 M, one of just four made with a very complex tangled history.

A personal favorite since I first saw it in person, the 1961 Dino 246 SP S/N 0790 is one of the most original Maranello sports prototypes in existence as it was kept after its racing career in an actual closed off grotto near Pescara by its last driver owner in period, Leandro Terra for 38 years. 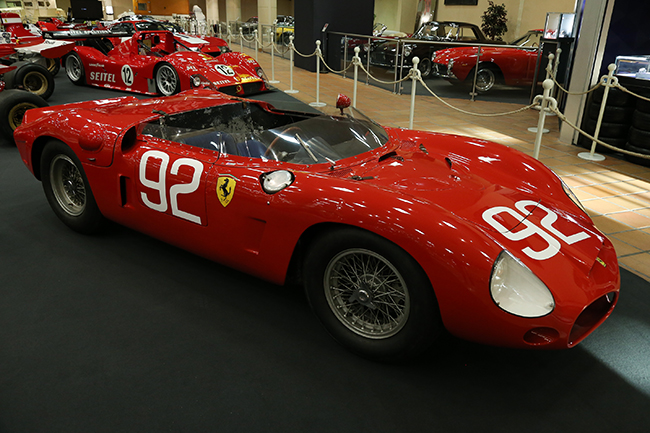 In February 1961 it was the actual 246 SP used in the factory press conference before it won the Targa Florio two months later with von Trips, Gendebien and Ginther.

A year later in May 1962 it won the Nürburgring 1000 km with Hill/Gendebien and in August the Guards Trophy race at Brands Hatch with Mike Parkes. It was then loaned to skilled privateer Edoardo Lualdi who competed in and won numerous hillclimbs from Gaisberg Austria to the one dramatically climbing the slopes of the Mount Etna volcano near Catania Sicily.

In 1964 Leandro Terra acquired it, winning the Coppa Gallenga hillclimb near the Pope’s summer retreat, and, after taking part in three other events pushed it in his grotto at the far end of the park on his estate and there it stayed until 2002.

There was much excitement when this time warp was unearthed by Symbolic Motorcars’ sleuths at the time. It was sold to Chuck Wegner of Chicago who had it restored but not cosmetically: the decades of patina in the cockpit and underpinnings were preserved. After numerous concours - Best of Show at Cavallino 2003 - and rounds of the Historic Challenge in the USA it took part in Le Mans Classic 2008 and 2010 with a new Dutch owner.

Next, seemingly from another century yet only a decade younger, was the 1972 312 PB S/N 0886. Perhaps Ferrari’s most refined racer it was so costly to produce, the 12 made were deemed too costly and sophisticated by the factory. Enzo Ferrari flatly refused one to Luigi Chinetti. This one won the 1972 Buenos Aires 1000 km with Ronnie Peterson and Tim Schenken, the came second at Sebring and Monza before winning again at the Nürbugring.

Harley Cluxton, always at the ready, bought it in the 1970s and it then changed hands among major collectors, being vintage raced several times by VIP guest drivers Jacky Ickx and, once, Brian Redman. Since 2010, it has been owned by dealer collector Jean Guikas.

One of the few street version 250 LMs S/N 5995, sold new to Count Volpi and owned by a major collector in Nice.

Little known by most tifosi, the rally facet of Ferraris history was represented by a 1976 308 GTB Michelotto S/N 19051, a winner of multiple rallies at the hands of among others the emblematic driver of that program, Jean Claude Andruet. 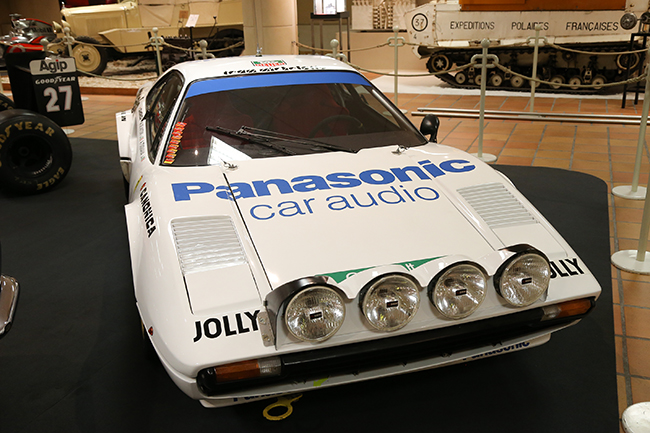 All in all this was a most judiciously assembled group of macchine di Maranello if the goal was to give a proper overview of 71 years of history.

But then again when it is a sovereign who via his staff asks collectors to lend their cars for display they oblige.

The museum is located in the Fontvieille neighbourhood of Monaco just a ten minute walk from the train station or Port Hercule, the harbour through which the Grand Prix circuit passes each May. It is to be found just on the other side of the promontory upon which sits the castle.

The exhibition lasts until March 15, 2019, so if you intend to visit Europe before then it is within an easy day trip flight from anywhere on the continent or the UK with the Nice airport just half an hour away by train or six minutes by reasonably priced helicopter shuttle landing 300 meters from the museum.

Unlike summer you can easily drive and park in Monaco in winter. After feasting your eyes at the expo you can head up the next hill to Monte Carlo, take in the glamour, palm trees and ubiquitous Maranello machines in the streets, have lunch or a drink while enjoying the view of the sparkling Mediterranean, always an escapist treat in winter.