It had been raining for weeks. On the morning of the February event, it was a 70% chance of rain, starting at 11 a.m.    The FCA Southwest region said “pedal to the metal” and probably upwards of 100 cars showed up for a beautiful morning event.

It had been raining for weeks. On the morning of the February event, it was a 70% chance of rain, starting at 11 a.m.

The FCA Southwest region said “pedal to the metal” and probably upwards of 100 cars showed up for a beautiful morning event.

The event actually started the evening before with a reception for those in the Petersen VIP group. That reception, held on the “penthouse” fourth floor of the parking structure, gave attendees a great view of Hollywood and the Hollywood Hills, plus some wonderful Italian pasta and a panel discussion.

There were three guest speakers: Derek Hill, the son of race piloto  (and World Champion) Phil Hill; Michael Leventhal, a significant Ferrari collector for 50 years; and Bruce Meyer, who is on the Museum board and a significant collector of many brands.

The panel discussion was illuminating.  Derek Hill showed his new book which revealed that Phil Hill was taking more pictures as a race driver than some photographers.

Hill has made it a labor of love to put these into a series of splendidly produced hardbound books. Mrs. Phil Hill was there too and she is always good at making a wisecrack.

Mr. Leventhal told of the many significant cars that escaped his grasp including a short wheelbase berlinetta in alloy that he sold because someone in Europe was making a copy of it and had found the correct engine. Which in a way invalidated his cars’ history though his was the real thing. (Not to worry, he does own a very early Barchetta that is a valuable artifact as well).

Bruce Meyer re-affirmed what I heard Hans Tanner had confirmed previously: in the 1950s and 1960s, Ferrari with their works cars and some private teams would switch chassis plate numbers before going through customs so they wouldn’t have to pay duties, which plays hob with historians decades later in trying to find out which car raced where.

Mr. Leventhal was enthusiastic about members driving their cars, He gave the example of meeting someone bragging about owning a 288 GTO with “only 400 miles on it”. He thinks that the real joy of owning a Ferrari is best discovered by driving it.

Bruce Meyer, who later displayed his silver Testa Rossa, said he drives his cars on the street every chance he gets.

The next day, the weather was sunny and bright and easily 100 cars showed up. Not too many were “historical” like Bruce Meyer’s silver Testa Rossa, but there was also a Lusso, a Boxer and a Dino. 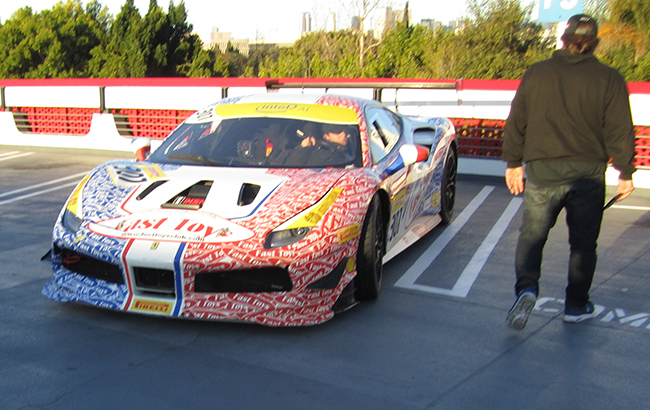 Most of the rest were newer cars, including very new ones.

One car that looked like it was not even in the same family so to speak was a Dino Fiat coupe by Bertone, one of the front engine ones. It may have been Giugiaro styled but was more like an Isuzu 117 than a Ferrari.

The crowd consisted mostly of FCA folk, though the Petersen should be lauded for being so generous in their policy of letting anybody come in off the street to their outdoor cruise-in shows, at no cost.

Now if the off-the-street visitors want to go inside the Museum and see the displays, they have to trek down four floors to the ticket office and buy an admission ticket.

There were free bagels and coffee and everybody managed to clear the area before the temperature dropped 20 degrees and the rains came.

Lesson learned? Sometimes you gotta go despite the weather report and hope for the best. 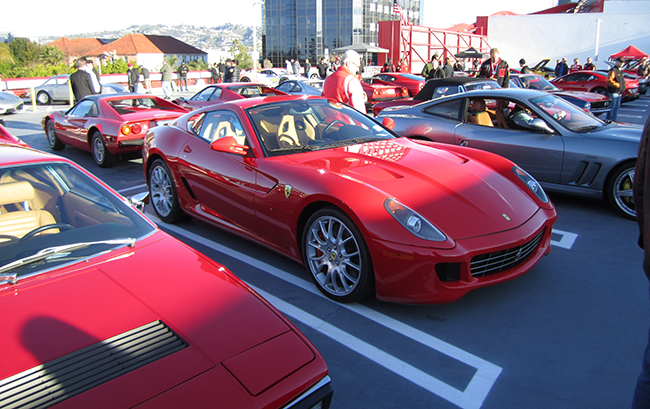 THE AUTHOR: Wallace Wyss is a fine artist accepting commissions to paint portraits of Ferraris. Write to mendoart7@gmail.com.