For a change I didn’t make it to the track at this annual meet. I participated in the competitive rally on Saturday but we didn’t win. ‘Nuff said.

For a change I didn’t make it to the track at this annual meet. I participated in the competitive rally on Saturday but we didn’t win. ‘Nuff said.

On Friday I was fortunate to be the passenger with David Varwig, from Illinois, for the pleasure drive from Scottsdale to Prescott.  He had rented a Cadillac CTS and it was quite a luxurious ride. Fortunately we are from the same generation with the same taste in music. We spent about six hours in that car.

I’d never been to Arizona so I didn’t know what to expect as far as scenery. We took the long drive up, approximately 180 miles, taking us east along Route 87, initially through quite barren land.

What a difference in topography along Route 87. I learned what a saguaro cactus is (to be honest, Varwig also pointed out other cacti, but those were not nearly as striking). It was fun to personify the different saguaro … one with two ‘arms’ facing forward was mother, poised for a hug. Two arms outstretched and reaching for the sky was the ref signaling touchdown. 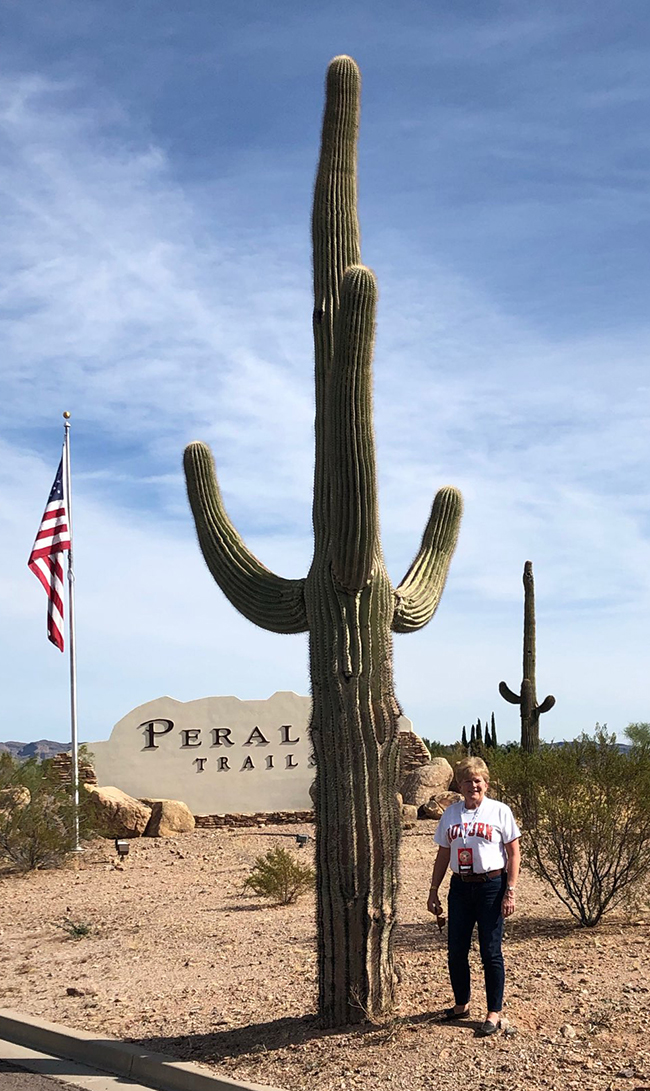 Towns are few and far between (even fewer and farther would be a big-box store, which ponders whether Amazon Prime members can get delivery). We went well over an hour without so much as a ranch in sight.

After the desert and the cactus, the mountainous views were spectacular although they looked strange to me because I’m accustomed to greenery … everything was brown out there. Brown rock.

Once we got into the Tonto National Forest there were plenty of pine trees, and we both decided from the landscape we wouldn’t know if we were in California or Colorado or Arizona.

The altitude of Prescott is 5,300 feet, which made for a nice respite from the heat in Scottsdale.  I know, it’s a ‘dry heat’.

We met other FCA members for lunch at the Palace Restaurant and Saloon, Arizona’s oldest bar, today restored in 1880s décor. The servers were dressed in period costumes adding to the fun, corsets and holsters included. After all, the block is known as Whiskey Row.

We walked around the courthouse plaza and visited a few shops, before returning to Scottsdale via the west route. This provided many more twists and turns on our descent through the mountains than the trip up, tapering off into a fantastic canyon.

Varwig handled it like a pro – it was fun but we forgot to fill up the tank leaving Prescott. The gauge fluctuated to a scary low because of the rapid descent, but when we levelled out it was like the car was ‘making gas’.

We stopped at the first gas station, and then had fun racing against the Tirrell’s F12berlinetta and the Lombardo’s 488 Spider … all the way back to I-17 and south to the hotel. Just in time for rush hour.