With the emphasis on ‘friends’ this year; one very special friend, Mr. Horacio Pagani, the Argentine founder of Pagani Automobili S.p.A., an Italian specialty auto-maker that produces some of the fastest, most exotic, most expensive and most desirable supercars, was the special guest.

With the emphasis on ‘friends’ this year; one very special friend, Mr. Horacio Pagani, the Argentine founder of Pagani Automobili S.p.A., an Italian specialty auto-maker that produces some of the fastest, most exotic, most expensive and most desirable supercars, was the special guest.

Pagani Automobili Modena was founded in 1992. The first car he produced was the Zonda, which took seven years to complete. His second car is the Huayra. It is named after Huayra Tata, the god of the wind in Incan culture. The cars are fairly costly, with the Huayra Roadster starting at $2.5 million, which also guarantees that they are rare: there are only 100 in the United States, and many of them are in the Hartford area.

I met Mr. Pagani, who said ‘I don’t speak very much English’. That’s okay, I replied, I don’t speak any Italian.  Fortunately for Pagani, he had a fantastic translator in Joe Capasso, whose only challenge seemed to be keeping up with Pagani’s lengthy statements at the reception held Saturday evening in Pagani’s honor. Unveiled at this reception was a roadster prototype that Pagani had intended to keep for himself but sold to one very lucky lady who took delivery at the reception. I overheard another guest remark ‘that’s a lot of car’. 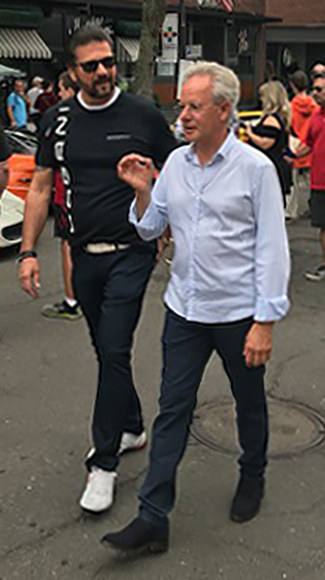 Concorso Ferrari & Friends was created by a group of owners who wanted to use their exotic automobiles to put smiles on the faces of patients at Connecticut Children’s Medical Center. Now in its 18th year, this event celebrates all makes and models of Italian automobiles—from vintage Alfa Romeos, Fiats and Lamborghinis to the supercars of Ferrari, Pagani and Maserati—while raising awareness and critical funding to support the hospital, attracting over 10,000 supporters and car enthusiasts each year.

Over $190,000 was raised this year to support the CCMC new Infusion and Dialysis Center, almost $80,000 more than was raised in 2017. For those of you who are parents, I’m sure you recognize how fortunate you are to have a healthy child. I was moved by the stories of children who are patients of CCMC, including one two-and-a-half year old who has been at the center since birth.

Sunday morning over 40 children were picked up at the center and driven to West Hartford in Ferraris, Lamborghinis, McLarens, Maseratis and Paganis. The drivers themselves are special; one was a CCMC patient 10 years ago and now participates as an owner of an exotic car. Some of the drivers had gifts for the children. I saw one little girl with a crown and I know of a driver of a red/tan California who presented his rider with a Hot Wheels model specced out the same!

Each child gets their photo taken in ‘their’ car and was presented with a special medal by Mr. Pagani. I don’t recall ever seeing a more patient and friendly patron as he stood for picture after picture, and signed his name to items from ball caps to posters for anyone willing to wait in line.

I had my own thrilling ride, not in the formal parade, but with Andrew Baldassarre, who owns 365 GTB/4 S/N 16693.  Baldassarre helps with the event so he needed to arrive early.  Surely folks were jarred awake as we sped through the suburbs, with speed in excess of 70 mph at times. I love a Daytona.

Almost 50 Ferraris were present amid other marques for an informal concours lining the streets of West Hartford.  The oldest Ferraris were a 250 GT PF Coupe (I also have a soft spot in my heart for a PF Coupe), the aforementioned Daytona, and a 1978 308 GTS. The only model I recall not present was the 355. There were 328s, 360s and 430s, two LaFerrari, on up to the GTC4Lusso.

I mingled with owners who shared some very special stories about their cars … stories that will make it into the database.  There was a 308 GTS QV originally purchased by the Gotti family and a 430 Scuderia owned by Sergei Fedorov. Plenty of cars with decades of single ownership, and the miles to show for it including one local doctor who uses his for a daily driver!

One story that made me chuckle was from an owner of a 328 GTS. He has owned this car twice, which is not unusual.  His first tenure only lasted 23 hours. Upon purchasing the car he took it home and proudly announced the acquisition to his wife. Oops.  Got to get that permission slip signed first, guys. She said ‘return it’. He did. Five years to the day later he bought the car again and got to keep it that time. I guess it was meant to be. By the way, he still has the same wife.

Six awards are given after lunch: 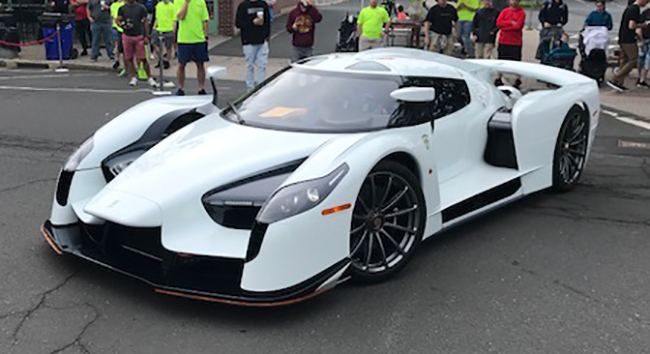 The Joe Namnoun Award for originality went to a Grigio Nuvolari 2006 Maserati GranSport with over 60,000 miles. This award is presented in memory of one of the founding sponsors of the event.

The Werner Pfister Award is presented by Miller Motorcars representatives who chose the verde 575M Maranello. This Ferrari has the appropriate license plate of SPIDY and reportedly was once owned by comedian Tim Allen.

The Tom Altmann Children’s Choice Award is named for a local restauranteur who was also instrumental in starting this event and went to the blue Pagani Huayra roadster prototype delivered to its new owner just the evening before. Certainly this car was destined to also win Best of Show. 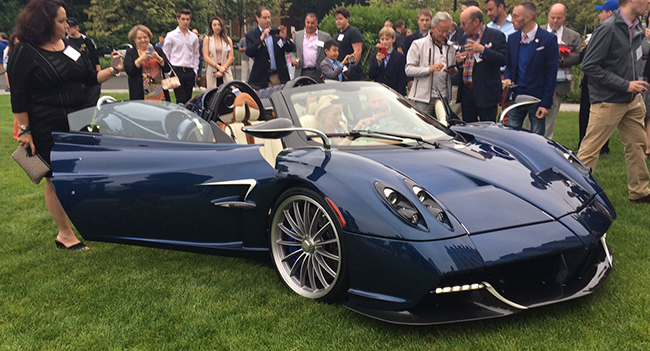 While you don’t have to be Italian to participate, you will be surrounded by plenty of paisonos who contribute to make this event a success year after year. Congratulations to all of the organizers, volunteers and owners for a fantastic 2018 edition of the Concorso Ferrari & Friends. 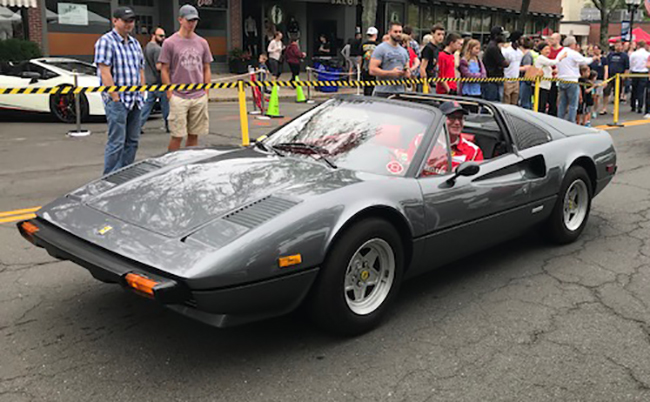