Celebration, Florida each April hosts a must-attend event. Organized by Jim and Jeff Ippoliti, this event ticks all the boxes that make the Celebration Exotic Car Festival one of the most fun and rewarding car-oriented events in the entire south.

Celebration, Florida each April hosts a must-attend event. Organized by Jim and Jeff Ippoliti, this event ticks all the boxes that make the Celebration Exotic Car Festival one of the most fun and rewarding car-oriented events in the entire south.

Few events can combine track time, entertainment, concours, fine dining and rally together and make it about having fun. It feels like a bunch of friends got together and described the perfect weekend.

“First, let’s start with some track time, not just any track; let’s go to Daytona Motor Speedway.” “Since one day couldn’t be enough, let’s make it two days.”

“After the track, let’s do dinner and a show. Then, how about a concours? It must be judged, not to Pebble Beach standards, but serious enough to bring in quality judges.”

“There must be at least one dress-up dinner so how about a fancy dinner with even more entertainment?”

“Just to finish the perfect weekend we can have a rally to enjoy some of the scenery and wind down.”

“What if we could do all this with volunteers and give all the money to a charity?”

I wasn’t there for the original conversation but I would bet the idea started sixteen years ago like that.

Each year Make-A-Wish is the recipient of the generosity shown by participants. All of the funds raised go directly to the charity; there is no administrative cost, as even that, is donated.

The event has grown so now one of the Make-A-Wish wishes is to come to the Celebration Exotic Car Festival. This year Jason Rodehaver wanted to come to Celebration and what a trip it was.

Thursday started the weekend at Daytona. The garages fill up with Ferraris and other makes all looking for some serious track time. The experienced and novice get a chance to drive the famous infield course. Sessions are geared to allow drivers to enjoy pushing their cars at comfortable levels. No racing, no close driving, just you and the car testing mechanical and personal limits against the track.

Rodehaver, of course, got his ride, or rides, around the legendary track. 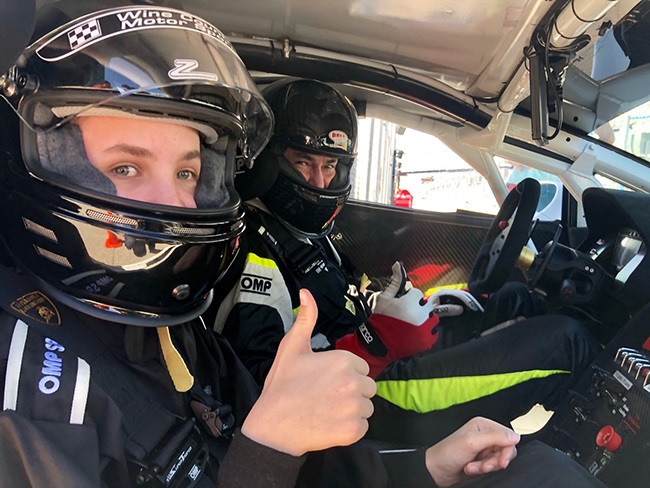 Friday was more of the same. Although it rained many still braved the slick track to improve their skills.

I’ll admit I didn’t go to the track; I had other plans, I’ll explain later, but I did talk to several people who were there and the consensus was a-good-time-was-had-by-all.

Friday dinner and a show begin in the most spectacular way. The host hotel is the Bohemian Hotel in downtown Celebration. The group loads up into several busses for the trip to the Hard Rock Live at Universal Studio.

Normally a trip at late rush-hour on a Friday night might take an hour. Tonight there is no traffic, and by no traffic, I mean, no traffic. The police escort has stopped all cars at intersections and even on the interstate all the way to the venue.

The entire procession is led by a police escort but right behind them is a bright green Lamborghini with young Jason leading the buses.

Once moving, the only time we stop is to park. It is always special to listen to the ones who have never had the chance to be treated like royalty. On-ramps are held, the interstate is deserted, red lights are run and cars pull to the side as we roll through.

This is just the warm-up to the night. As we walk up to the Hard Rock we are escorted to a private area with several buffet stations and open bar. Eat and drink as much as you can handle, but not too much because we are here to see comedy greats Steve Martin and Martin Short live on stage.

These two guys clearly are having fun. The banter flows back and forth with barbs and insults, jokes and laughter, some song and dance. Paul Shaffer played piano and played along with the zany on-stage skits. While not completely PG it was a very mild R-rated show, proving there is no need for crass jokes to get a laugh.

Saturday morning is the concours; Ferrari and others line the main street of Celebration. Generally this event does not attract classic Ferraris. The oldest one was Tefft Smith’s replica 250 GTO, still pretty impressive to look at, especially when most of the crowd doesn’t know. The comments are interesting to listen to while people drift past this one.

The majority of Ferraris are newer, if you can call a 308 GT4 a newer Ferrari. I think each model from the 308 up to the 488 Spider are well represented. Even the V-12 cars from the Testarossa, 550 Maranello, 575M Maranello to the F12berlinetta and 812 Superfast are shown.

Judging teams go from car to car, checking the list for operational items and originality. I’m glad I don’t have to be checking these cars as they all look new, shiny and well-kept. A judge’s job can’t be easy on these Ferraris.

Honorary judge, Jason Rodehaver, gets to pick his favorite car from all the cars present. It’s not a Ferrari, but then what twelve-year-old could resist choosing a beautiful Pagani Huayra for the special Jason Award. 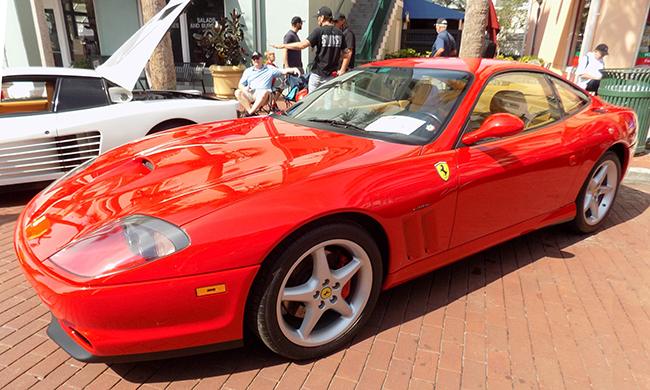 After the concours it’s time to get dressed up for dinner at the Four Seasons Resort. Again, the buses line up to take folks to the resort only this time there is no escort. There is no need since the Saturday traffic is not as busy.

The dinner begins with a Champagne Taittinger reception. Then with dinner various ZD Wines are paired with each course. After the drink and conversation have settled in there is an auction to raise more funds for Make-A-Wish.

The guest entertainment for the evening was John Waite. I didn’t recognize the name but after I Googled his name I recognized several songs from the 1980s.

I have to admit, I didn’t go to the dinner. I have been several times and each one has been great with fine food, good company and well worth attending.

My excuse this year is I drove down to Sarasota to have dinner with my parents. They are getting older and being this close made it a wanted side trip. My apologies to the Ippolitis’ for not making the dinner, for it is always great fun.

Celebration Exotic Car Festival continues to be one of the most fun events I travel to. The enthusiasm to make this event exciting from the activities to the volunteers with the underlying goal of providing funds to Make-A-Wish and granting a wish to Jason Rodehaver cannot be easily expressed.

Make plans to go next year and I guarantee you will have fun every day and it’s all for a good cause.