For those readers old enough to remember, the four seasons were shadowed by Automobile Quarterly (“AQ” to those in the know). Its arrival in a neatly packaged cardboard envelope was like a Christmas gift, regardless of the season.

“There once was a magazine nicknamed ‘AQ’.

Its contents would improve your IQ.

With articles on cars;

It taught you things you never knew.”

For those readers old enough to remember, the four seasons were shadowed by Automobile Quarterly (“AQ” to those in the know). Its arrival in a neatly packaged cardboard envelope was like a Christmas gift, regardless of the season.

Fast forward to today; AQ has long gone the way of Autobianchi and Bizzarrini. That said, during its tenure, according to a very extensive Contents Index created by Sarah Dunne of The Owl’s Head Transportation Museum (OHTM: www.owlshead.org) in Maine, there were no less than sixteen dedicated articles to Ferrari.

Like anything related to extinct automobilia, a collection of a complete set of Automobile Quarterly becomes more difficult over time; but, there is a solution.

It was established by L. Scott Bailey, sold eventually to CBS Publications and managed by John Bond. From there ownership switched to Kutztown Publishing, then to Automobile Heritage Publishing & Communications, LLC, and its final demise. 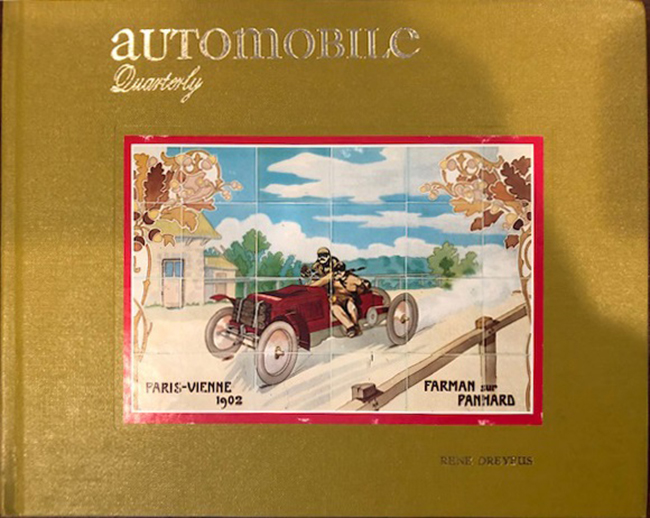 Topics ranged from the history of automotive marques, to race cars and drivers, collectors/collections, inventors and venues. Great detail and research went into each, not to forget beautiful artwork.

Interestingly, one of the first editions (Volume 1, Number 2) contained an article, “Meet the Chowderheads”, about the Madison Avenue Sports Car Driving and Chowder Society (MASCDCS), which still exists today. Credit to Mary Wennerstrom for continuing to hold well-attended club meetings at Sardi’s Restaurant in Manhattan.

Those of us who save automotive ephemera, fall somewhere between hoarders, and collectors.

Just refer to us as “Colloarders”. That said, filling the missing editions of an AQ collection becomes a worthy challenge and personal crusade. Even David E. Davis, Jr., in AQ Volume 49, Volume 1 lamented; “I have struggled to stay up with my AQ collection... but, alas, my collection is not complete...it does bother me.”

If you are a bit on in years, you may have been a charter subscriber to AQ; many of us, however, began our subscriptions in later years.

Thus, the gaps in collections. Admittedly, my own AQ collection is complete; but with two other incomplete collections in the works, the hunt continues to capture the missing volumes.

On a side note that relates to autographs, the late Denise McCluggage was kind enough to sign Volume 1 Number 1, in which she was an author. Friend, collector and entrepreneur, the late Malcolm Pray, who appeared in Volume 50, Number 2, signed that edition. A third, accidentally discovered AQ edition, produced a surprise autograph which will be referenced shortly.

Book sales, the OHTM, Bonham auctions, and antique book stores are sources for the escaped issues. For example, a church book sale in Wilton, Connecticut, produced a dozen volumes at $1.00 apiece.

Bonham’s automobile auctions offer partial and complete sets (no challenge with that) in the hundreds, if not thousands of dollars. Antique book sellers such as Douglas Harding Rare Books in Maine, or Strand Book Store on East 12th and Broadway in Manhattan, often receive estate sales. Even the Society of Automotive Historians has a limited supply of abandoned issues.

With respect to The Strand, last year on a random visit, Volume 23 Number 4 was among a gaggle of AQ’s for sale. Upon arriving home and inspecting it more closely, it was embossed in gold leaf on the cover with the owner’s name: “Rene Dreyfus”, and no less autographed by the famous Grand Prix driver inside (an ironic sidenote: Rene and his brother, Maurice, opened Le Chanteclair restaurant in mid-town Manhattan, after escaping France during World War II. For years it was the original luncheon location for the MASCDCS, prior to moving to Sardi’s Restaurant).

The added difficulty in finding the pieces for the puzzle of a complete AQ collection, is that the latter volumes, from Volume 40, Number 1, to Volume 51, Number 2, are much more scarce. That said, more recently on a Strand visit, there were fifteen AQ volumes falling into that timeline. They not only offered the opportunity to fill the gaps, but it was an epiphany moment as to why these are so rare.

1) There were many less subscribers in the later years, thus contributing to the magazine’s demise;

2) Many of we latter-day subscribers have yet to die and leave behinds our issues; and,

3) Today’s generation couldn’t care less about printed periodicals and what their parents have accumulated.

But maybe there’s an exception to number 3...

Unlike Indian Motorcycles, we may never see the resurrection of Automobile Quarterly. However, the beautiful mosaic of brightly colorful covers (although, the final years were fittingly black) and equally beautifully researched and written articles, may be of interest to a future generation of automotive enthusiasts.

To wit, whenever my two-year old grandson (Hudson), comes to visit, he’s immediately drawn first to the model cars on display, and then to the eye-catching rainbow of AQ books; all two hundred and two.

Perhaps, to the chagrin of his grandmother, my being a Colloarder isn’t such a bad thing after all.