365 GT 2+2, S/N  12963 (1969). Silver with black leather. Estimate $225,000 to $285,000. Delivered new to Portugal in June 1969 in the current color combination and had only one owner until the end of the 1990s. Since then it has had two owners in Holland, including the current one. Original documentation, manual and instruction books in leather pouch. Matching numbers, always well maintained, and verified by the Ferrari dealership in Kassel, Germany. With Borrani spoke rims (the original rims are available). Original black leather with very beautiful patina. Lot 17. Not sold. 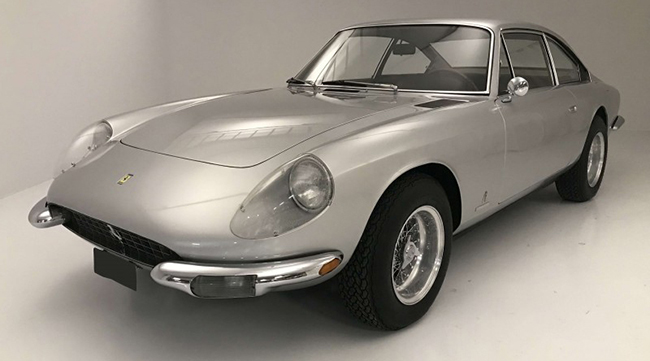 TESTAROSSA, S/N 89491 (1991). Yellow with black leather. Estimate $102,000 to $136,000. Delivered new by Etablissements Auto 2000, in Lille, in February 1991. Its first owner, a Ferrari collector, had the car registered for the first time in 1993 and kept it for nearly 22 years. The current owner acquired it in 2015 with only 21,000 km. It has been extensively serviced, including the replacement of timing belts. New Michelin Pilot Sport tires. An aluminum set including footrests, pedals and gear knob was installed; the original parts have been preserved. Its yellow paint is in a very good condition. With original manuals, cover in giallo color, jack and tool kit. Two owner example with 25,500 km. since new and remarkably well preserved. Lot 63. Not sold.

208 GT4, S/N 11684 (1976). Red with beige interior. Estimate $45,500 to $68,000. Sold new in Italy in 1976. With fabric and original well-preserved beige imitation leather interior, electric windows, air conditioning and radio. It was imported into Germany in 2002, then, between 2009 and 2012, it benefited from numerous mechanical works at Ferrari, with invoices. Our collector acquired it in 2014 and entrusted it to a Ferrari mechanic to carry out electrical work and a mechanical overhaul, as shown in a photographic file. In good condition and working order. Lot 58. Sold for $37,972.

308 GTS, S/N 29819 (1979). Blue with beige leather. Estimate $68,000 to $90,000. Leaving the factory in October 1979, and delivered new in California on March 8, 1980, as shown in its service book. It then changed ownership in December of the same year, until 2015, when it was imported into Germany. Well preserved, the car has been brought up to European standards, with the removal of the catalytic converter, bumpers, and an overhaul including the replacement of shock absorbers, service of the brakes and restoration of the air conditioning. In August 2017, the mirrors were replaced, the carburation revised, the steering refurbished and the front axle adjusted. A mechanical overhaul was also carried out. The car now has an electronic ignition and a stainless steel exhaust system. Metallic night blue livery and original beige interior with books, and tool kit. Lot 59. Not sold.

328 GTB, S/N 76517 (1988). Red with tan leather. Estimate $102,000 to $136,000. Imported by the Swedish agent Europeiska Motorkompaniet on 8 April 1988, it was sold and registered to its first owner one month later on 5 June. The first owner was the Swedish fund managing company Carnegie AB where it must have been used as a company car. They kept it one year as it was sold on 25 May 1989 to the current owner. Total mileage over the 30 years of its life is only 10,950 km. Due to little use, the new owner should have the car properly inspected and serviced, including a cam-belts change before using the car. Complete with all its books and tools as well as the guarantee booklet and service book. Lot 62. Sold for $107,134.

348 tb, S/N 94337 (1992). Red with tan leather. Estimate $34,000 to  $45,000. Sold new in Bordeaux. Its service book shows rigorous maintenance with all the services recommended by the manufacturer, duly stamped by the official garages of Mérignac, Bruges and Bayonne. The latest service, including the change of the belts, was accomplished by a Ferrari specialist in Pau. 85,700 km. Perfectly maintained and its mechanicals are in very good condition. During the test, all the electrical elements were working, and the interior was in excellent condition. Lot 61. Sold for $51,533.