ALL FERRARIS SHOULD BE RED

Should all Ferraris be red? With tongue firmly in cheek, Cathy lays out her argument about what color a Ferrari should be.

Now that I have your attention.

Pretty radical statement, don’t you think? But Enzo Ferrari once said, “ask a child to draw a car, and certainly, he will draw it red.”

Let’s start with the obvious … Testa Rossa?  Definition is red head (whether you’re referring to the two-word or one-word model). I know, I know … what about Sonny Crockett’s WHITE Testarossa in Miami Vice.

Do YOU want a white Testarossa? Can you (still) pull off the pastel shirt unbuttoned nearly to your belly button like Don Johnson? Case closed.

And while I’m on the subject, what OTHER color should Scuderia Ferrari swath their race cars? Used to be called Marlboro red, but I’m not here to promote cigarette smoking.

Come on, does RED look good on a Lamborghini? No, it does not. As opposed to their Verde Mantis (aka green).

Some atrocious color combinations are out there. The spotting of one by a subscriber prompted this article.

It was the F430 Spider F1 in Marrone 1971. Recently offered on BringATrailer, I saw it at Amelia Island in 2019 when RM Sotheby’s had it for auction. Promoted as “a color more commonly found on Dinos, Daytonas, and 365 GTC/4s. The result is a spectacular F430, believed to be the only example finished in this color”. The interior is beige, so it’s not as bad as it could be.

In Italian, marrone translates to brown. I read an article recently that started out this way: for the most part, brown is a color that doesn’t look good adorning the exterior of a car. The article was written about a Roma that had been designed through Ferrari’s Tailor-Made program.

That article didn’t have the official color of the Roma and my research on the Ispirazione cars has a dark amber, a copper hue to the man on the street – inspired by 330 GTC, perhaps S/N 10463; a Bronze Montecarlo, inspired by bronze and beige tones; and a marrone metallic, inspired by warm nuances. But definitely all three are shades of brown.

To say nothing of the color Prugna … you can call it Burgundy, Bordeaux, Claret, Cabernet - take your pick of the red wines out there, but there is no mistaking it’s the color of … yes … a prune.

As I was writing this article, a prugna 308 GTS QV came up on offer at BringATrailer. One follower made this comment:  I love the fact this it can change color in different light. Appropriately, this car’s license plate is PRUGNA1. Just so there’s no mistaking the color.

If you’re in the mood for one of those red wine colors, how about Rosso Vinaccia; it’s a little darker than prugna, and if I may, the name is much more appetizing. It’s on a handful of 612 Scaglietti, even more 599s, several 430s and 458s, and one LaFerrari. That’s a tall glass of … wine.

Purple? Yep – SEEN IT. Couple of Dinos. Get it? Dino? Barney the Dinosaur. Or the purple (Viola Hong Kong) SF90 Spider recently spotted at Spa Francorchamps. 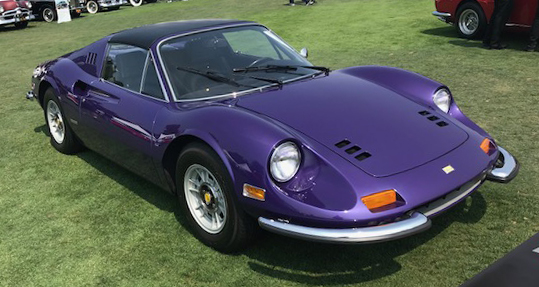 Green.  There’s a color often seen on a Ferrari. Cue Barry Cross in his green 308 GTSi.

There are close to 30 different shades of green that a Ferrari has been seen painted. I don’t have the proper names down pat – database entries can be quite interesting.

Verde Germoglio on an 812 GTS. Think Lamborghini – or the grinch. That’s it. This should be rare on a Ferrari, but there are a few out there paying homage to a certain 246 GTS.

Verde British Racing is not that rare, although I would argue it should be on a Jaguar due to the name’s reference to England.

Now let’s switch it around – green interior? It’s out there. In a white Daytona, no less, S/N 13745. Yellow with green interior is on a European Testarossa. Circle back to the title of this article.

While we’re talking greens, how about a Christmas Ferrari? Tis the season. Took me a while to find it, but there’s 308 GT4, S/N 10286, painted mint green, black interior but red piping, and red carpets.

A Portofino in Japan is green with red seats. Ho, ho, ho.

So, you argue … if not red, what? Currently, Ferrari offers its customers more than 30 distinct colors, including shades of silver, yellow, green, blue, black, white, and red. Special clients can create their own colors.

You know I see a lot of Ferraris. And I’ve seen a lot of color combinations.  Some make me think, ooooh, that’s LOVELY.

Others make me think ‘Hail! to the conqu’ring heroes’. Recognize that? Michigan, Let’s go blue … with yellow interior. There’s a RHD 575M Maranello in Blu Tour de France with yellow interior – probably a Mansfield fan, or Everton. No, I didn’t know that off the top of my head; I Googled it.

There must be lots of Michigan fans out there; after all, The Big House has hosted crowds in excess of 115,000. Recently an F8 Tributo was offered in Giallo Modena with (albeit) Baby Blu leather. And a 360 Modena, Giallo Modena with Blu Scuro. I could go on.

While we’re on the subject of football, more than once I’ve seen MY team’s colors (orange and blue). I don’t recall orange exterior (Arancia or Rosso Dino, if you prefer – still a shade of red if you want to get picky) with blue interior, but I have seen blue exterior with cuoio interior.

A 488 GTB in at Foreign Cars Italia had Blu Tour de France exterior with cuoio interior. Cuoio is about as close to a shade of orange as I think we can get for a standard interior. I took a picture and sent it to some Auburn fans and said THIS is what I’ve been looking for. Can’t you just see an AU magnet on the doors? How popular would I be at tailgate.

Or an SF90 Stradale, currently at Ferrari of Ontario. The exterior is Blu Abu Dhabi, but the interior is Arancia. Now we’re talking.

January 2022 offered in Arizona by RM Sotheby’s, was 330 GTS S/N 9805 whose original colors were Blu Sera and trimmed in Arancia leather, per Marcel Massini. Presently in red with tan, audible sigh. I bet those guys at Perfect Reflections would put it back right for me.

I would be remiss without mentioning another PERSONAL favorite: the Ferrari Market Letter-themed livery. Giallo Modena with Rosso Ferrari interior.  Lately spotted in an 812 Superfast (although technically it was Giallo Triplo Strato). It begs to have our logo somewhere on its chassis.

In 2006 a 430 Spider was shown at Cavallino, S/N 145852. It is Giallo Modena with yellow Daytona seats, yellow dash and steering wheel – even yellow carpet. Get those sunglasses on. 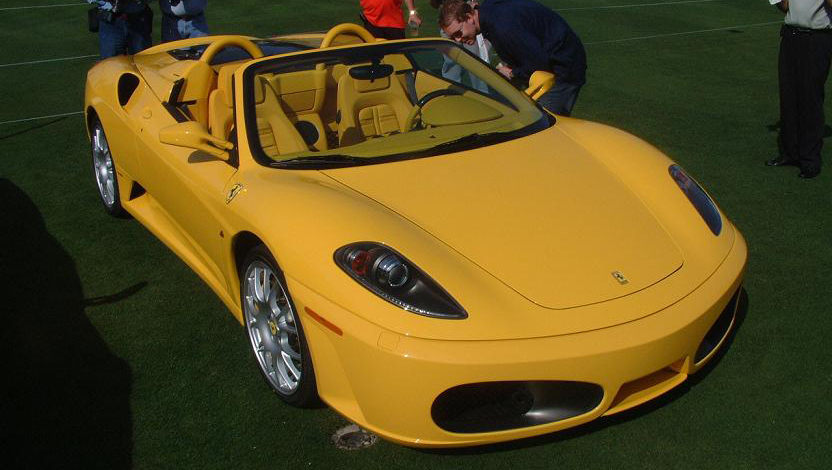 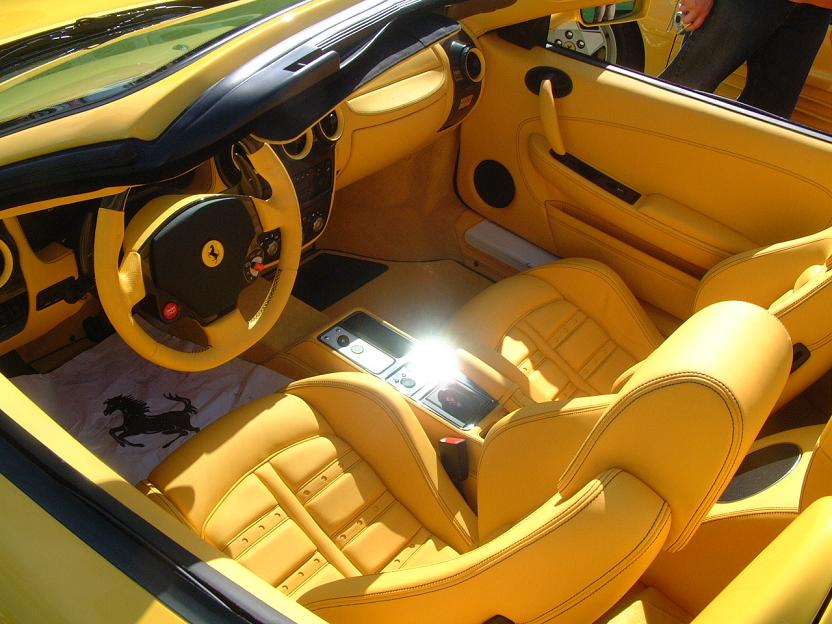 Ferrari collector Phil Bachman would agree about a yellow exterior; conversely, Peter Kalikow was surely the inspiration behind a recent article on ClassicDriver.com: We love Ferraris in any color – as long as they are blue.

They say beauty is in the eye of the beholder, but there are certain celebrities who will not be holding a Ferrari in the future. They have been banned from purchasing a new Ferrari for their personalization.

There was Justin Bieber, with his neon blue 458 Italia. It was originally white. There’s usually nothing wrong with a blue Ferrari; I think he should have been banned because he ‘misplaced’ the car for three weeks.  That’s a whole ‘nother story.

In 2013, Deadmau5 took his 458 Spider and put a custom-wrap on it of the Nyan Cat. He added custom badges and floor mats and renamed the car Purrari. Clever; nonetheless, I hadn’t even heard of this celebrity before researching this theme.

Blac Chyna is another because of a Ferrari she had repainted in Barbie Pink. Perhaps were she a Mary Kay consultant, but of course, the vehicle would be a Cadillac, not a Ferrari.

If you’ve got to have a red Ferrari, like me – there are shades and shades of red and my title is meant to include all of those shades. Rosso Barchetta, Rosso Cina, Rosso Fiorano, Rosso Mugello, Rosso Rubino.

I don’t think these models look good in Rosso Corsa: Lusso, any of the 330s, 456, FF, GTC4Lusso, or the Roma. Not for me. But there was a Rubino Micalizzato FF recently sold by F40. That color looked nice on the car; and there was a Rosso Fiorano F355 Spider at Ferrari of Atlanta that was quite lovely. 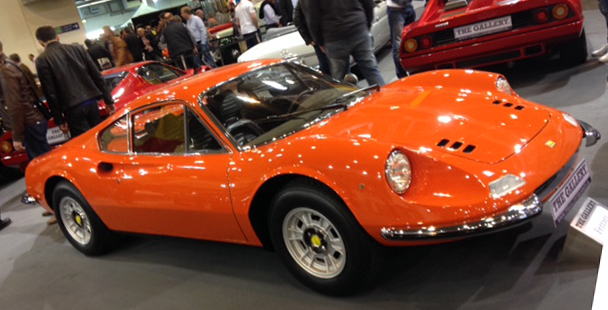 Googling “Ferrari Red” brought up 15 shades. New ones being brewed with each model. Rosso Portofino, Rosso California, just for starters.

Statistics state about 40 percent of the new cars that Ferrari sells are red. This might seem like a huge number, but compare it to the early 1990s – where over 85 percent of new cars were ordered in red.

Lest I irritate, or heaven forbid, alienate you, dear reader…they don’t call it Resale Red for nothing!

Before you shoot off an e-mail lambasting me, remember, this is just my opinion and meant to be taken tongue-in-cheek. Clearly not ALL Ferraris should be red.  But I think you’ll agree, some models DO look better in red. I say tom-ay-to, you say tom-ah-toe. 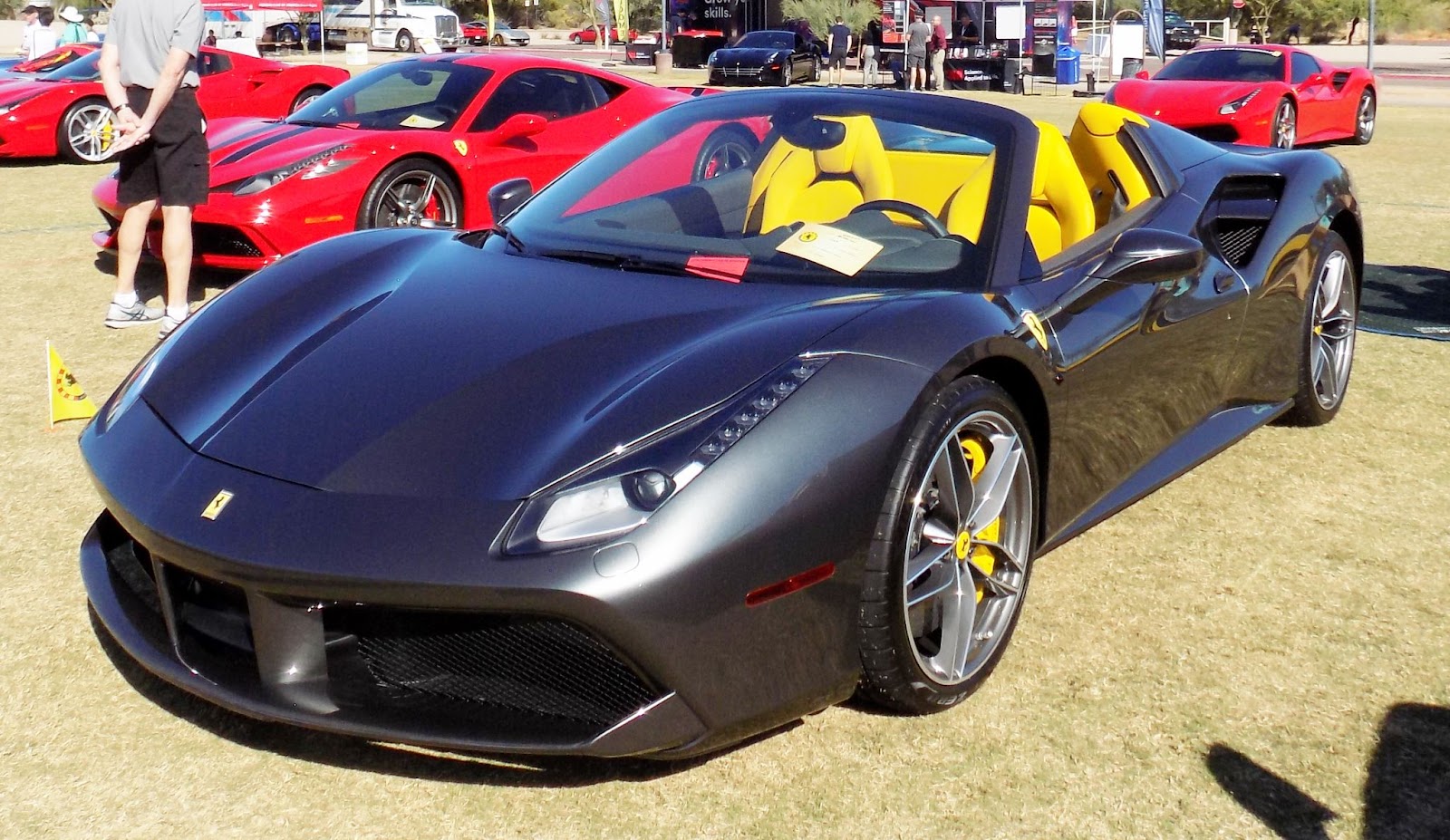