A WEEK AT MONTEREY

Of course, the biggest news came out of the packed RM Sotheby’s auction tent. The crowd had come to witness what was predicted to be auction history, and the 1962 Ferrari GTO delivered by selling for $48.4 million (including commission). That’s now the record for the most ever paid for an automobile at auction.

Another Monterey Car Week has come to a close, and, as has become the norm, the car world is buzzing about auction results in the days after. My Premier Financial Services colleagues and I had the privilege of enjoying the festivities over the weekend, and some of what we saw inspired lively debates around the office.

Of course, the biggest news came out of the packed RM Sotheby’s auction tent. The crowd had come to witness what was predicted to be auction history, and the 1962 Ferrari GTO delivered by selling for $48.4 million (including commission). That’s now the record for the most ever paid for an automobile at auction.

Even in the Ferrari world, there was admiration for a couple of other major sales, the $22 million paid for the 1935 “Gary Cooper” Duesenberg SSJ roadster and the 1963 Aston Martin DP215 racer that went for just over $21 million. Either of those magnificent cars would be a prize in any collection.

While the auctions and the Pebble Beach Concours d’Elegance generate the headlines, there’s so much more to Car Week, with much of the enjoyment taking place outside of the more exclusive arenas. There really is something for enthusiasts of all stripes … and bank account sizes!

My personal, never-miss favorite is the Carmel-by-the-Sea Concours on the Avenue. This is a judged show, of course, with some truly amazing cars grouped into classes. The setting of cars lining Ocean Avenue and the side streets creates a wonderfully casual atmosphere. It’s free admission, and you can really take the time to look at all the cars, then take a break in a café for lunch and then go back and look some more. To me, seeing a classic Ferrari in this setting, parked on the street rather than on grass, and most likely driven here, feels more “real” than seeing it on display at Pebble Beach. 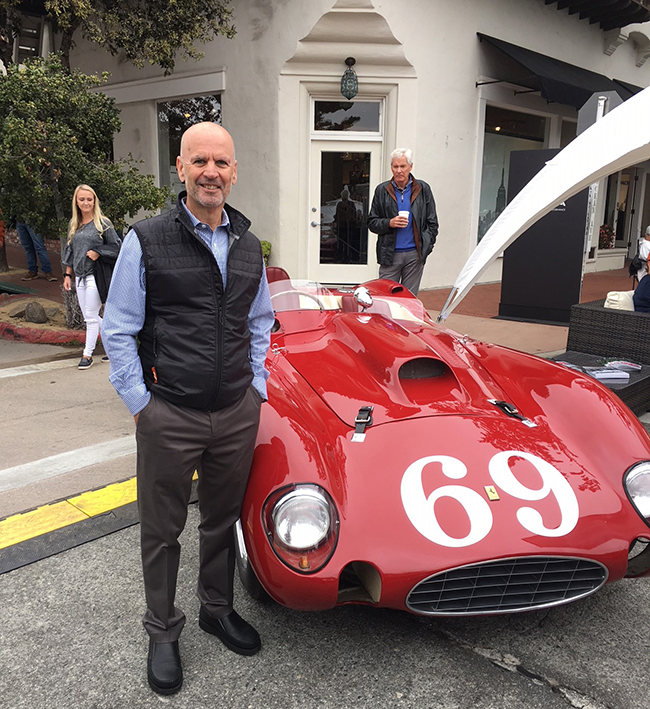 The Carmel Mission Classic on Wednesday was another gem. It’s not the quality of cars you’ll see at Pebble Beach, but it’s a good mix and a comfortable, casual pace in a historic and stunning setting.

The “work” part started on Thursday. With my colleagues from Premier, I attended the RM Sotheby’s and Gooding auction previews, and also saw some of the Pebble Beach Tour d’Elegance, which starts there. Until these previews, the cars have been just photos and auction descriptions. Being around them, the excitement becomes palpable.

There’s no denying the excitement from Ferrari can come as much from the hammer at an auction as from the ripping exhaust note! In addition to the GTO, other high-dollar Ferraris sold at RM Sotheby’s included a 1953 250 MM for $7.4 million, a 1954 375 America by Vignale for $3.25 million and a 1960 250 GT SWB Competizione alloy-body for $8.45 million.

At Gooding’s sale, the 1955 Mondial Series II, known as “the Admiral’s Ferrari” after the gentleman who owned it for the last 58 years, sold for a hair over $5 million. Though below the $5.5 million to $7.5 million pre-sale estimate, it was still a record.

As Juan Garcia, our West Coast sales manager pointed out, many of the Ferraris sold at the low end or below their estimates at Monterey. It’s hard to say if this is going to be a trend. Maybe some of the estimates were too optimistic.

That wasn’t the case for the 1966 Dino Berlinetta GT, the second Dino prototype built by Pininfarina and displayed at the 1966 Torino Motor Show. This historic Ferrari sold for $3.08 million, reaching the high end of its $2 million to $3 million pre-sale estimate.

On the contemporary front, Gooding & Company sold a triple black LaFerrari with 1,050 miles for $3.08 million, which was below its $3.2 million to $3.6 million presale estimate. RM Sotheby’s sold a red LaFerrari for $3.3 million, with proceeds benefitting The College for Creative Studies in Detroit. Remember, a LaFerarri with just 211 miles brought $4.7 million at Mecum’s Monterey sale last year.