In FML 4417, I shared with you an ambitious project I have been working on during the past year. My ultimate goal is to identify all 350 serial numbers of the 70th Anniversary liveried Ferraris.

In FML 4417, I shared with you an ambitious project I have been working on during the past year. My ultimate goal is to identify all 350 serial numbers of the 70th Anniversary liveried Ferraris.

There are 70 different liveries; Style Icons as Ferrari’s official website refers to them. Color combinations in plain speak – and these 70 liveries have been applied to five models of Ferrari: 488 GTB, 488 Spider, GTC4Lusso, F12berlinetta, and California T.

I gave you some background on selected liveries, and shared with you some statistics on the progress of this task. The response to my request for additional numbers was, well, underwhelming.

I did hear from a few people, mainly other folks also on the hunt for these numbers, and one authorized Ferrari dealer.

Since August 17, 23 serial numbers from those first 38 liveries have been added to the list, and photos for three unidentified cars were received. Would those three also come identified by the VIN??? … oh well. Only one of the first 38 liveries is missing three numbers; only four of those 38 are missing two numbers.

That means I have 166 of the 190 liveries #1-38, almost 88 per cent. 19 liveries of the 38 have all five serial numbers (the three unidentified photos would complete three more liveries).  I’m pleased.

Let’s move on to the next 11 liveries, from the decade 1967-1976. As with many of the first 38 liveries, most of these pay homage to Ferrari’s racing history, although the column in my spreadsheet for the inspiration serial number is depressingly sparse.

THE AMERICAN DREAM: Livery #39. Named after the North American Racing Team, the 275 GTB/4*S NART Spyder is one of the most valuable Ferraris of all time due to its exclusivity - just 10 were built and they rarely change hands. The exterior for this livery is a very deep and fine metallic dark blue. The interior is black leather and dune colored richer furniture leather. This livery could have easily been in yellow. In the database we have the original colors for all ten, and three were yellow.

We have all five of the cars identified in this livery; the last one coming to me while I was writing this article!

THE DAYTONA: Livery #42. Named in recognition of Ferrari’s 1-2-3 victory in the 24 Hours of Daytona in 1967. This livery is Blu NART with Rosso Ferrari leather with black Daytona seat stripes.  An unusual choice, in my opinion. Aren’t all Daytonas supposed to be red with black interior?

THE TARTAN: Livery #46. Based on a sophisticated rendition of the 365 GTC/4 from 1971 with an understated dark brown exterior, this car featured a tartan canvas and camel leather interior. I’ve not been able to identify the serial number of the inspiration, but our database has several C/4s with tartan interior. I think it goes well with the brown exterior.

We have four of these identified, missing the GTC4Lusso; ironic, don’t you agree? We have a photo and believe the car is in the U.S. 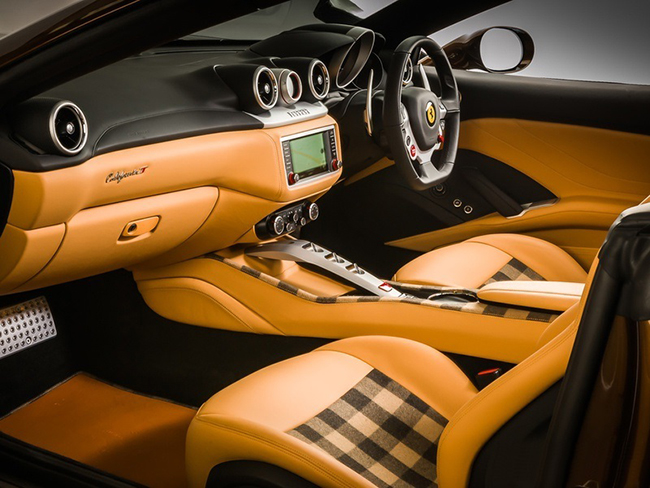