The lowly 330 GT 2+2 has been much-maligned throughout the history of Ferrari. It has been among the least desirable models, but then again most of the 2+2 Ferraris have not enjoyed the status many others enjoy.

The lowly 330 GT 2+2 has been much-maligned throughout the history of Ferrari. It has been among the least desirable models, but then again most of the 2+2 Ferraris have not enjoyed the status many others enjoy.

It’s not exciting like a SWB Berlinetta or a Daytona. It doesn’t have the lines of a 275 GTB. There is not an open-air version like a 275 or 330 GTS. So, what could be special about this often overlooked at Ferrari?

As a gentleman’s 2+2 Ferrari, it is preceded by the 250 GTE. The 250 GTE was created as an extension of the 250 GT line of cars. By the time GTE production ended, Ferrari had built 950 examples, the most prolific model built to date.

Clearly there was a market for a Ferrari that could be used in the Grand Touring role without intruding into exclusive Superamerica territory. An everyman’s Ferrari that was weathertight, able to be driven to the store, or work and back, that also provided a level of performance above most other manufacturers.

The upwardly mobile businessman could enjoy the fruits of success in a luxurious sports car. A company as small as Ferrari surely took notice at the volume of GTEs sold and recognized it as the most popular model available.

If taken in a broad sense all of the 250 GT cars are nearly identical. While the 250 GT Boano/Ellena model does share much with the 250 GT PF Coupe, the PF Coupe is the beginning. While the Coupe enjoyed the improvements and advancement of design, every model after the PF Coupe carried the same configuration.

The basic ladder frame, the front suspension, solid rear axle with leaf springs, even the 3-liter V-12 engine, did not change throughout the rest of the 250 GT series. Whether a PF Coupe or a 250 Lusso, many of the components will interchange. Because they are so similar explains why so many 250 GT models have been rebodied into GTOs and TRs.

The last fifty GTE bodies had a larger engine installed. The V-12 engine was improved and enlarged to 4-liters, making the individual cylinder capacity 330 cc. Thus the 330 Tipo 209 engine. While the increased capacity improved performance, the body design needed to be updated.

Pininfarina created a design that took styling cues from others in the day. The four headlights set into the fenders was a modern look for the early 1960s. It was a conventional look for its day and while other areas of the car would hold up well into the future, the headlight treatment was not exciting.

The 330 GT was made from 1964 through 1967 and incorporates the most changes to any Ferrari throughout the production run. Until Daytona production ended in 1973, the 330 GT was produced in the largest numbers to date with 1,080 built.

The number of 330 GT cars built is misleading. Yes, there were 1,080 built, but there were many mechanical changes during production and two distinct body changes. I will analyze what makes these mundane 2+2s unique.

The chassis of the 330 GT followed the same design philosophy started with the 250 GT series. The tubular ladder frame contained independent front suspension with coil springs and cast aluminum control arms. The rear axle was solid, and it was located by radius rods and leaf springs. These features would stay with the model throughout the production run.

Braking was accomplished with disc brakes using Dunlop calipers on all four wheels. So far, the new 330 GT was similar mechanically to the 250 GTE.

Once we get past this basic platform, the 330 GT begins to get complicated. There are two distinct body styles, different dash materials, two different transmissions, different braking systems and numerous refinements in creature comforts. We will review all of them.

The 330 GT has three different configurations: Series I, Interim and Series II, each with its own general specifications. My goal is to identify each subset, so you, the reader, will be able to walk up to any 330 GT and be able to recognize what makes it special. In addition, you can impress friends and neighbors with your expert Ferrari knowledge.

Caveat and disclaimers first. Ferrari automobiles, especially in the first three decades of production, made running changes as they felt necessary. Cars were not built in serial number order so often there is overlap when it comes to changes and when those changes occurred. There is never a statement that can be made “They are all like this” or “They would have never done that”.

I will reference serial numbers only with the general idea that changes occurred near those numbers but be forewarned nothing relating to Ferrari is hard and fast.  With that said, let us begin.

Series I cars can be identified easily by looking for a few items on the car. Looking into the interior, very early 330 GT 2+2s had a black metal dash, reminiscent of the 250 series that preceded it. Later cars received a wood veneer on the dash.

Relating to the earlier caveat, all metal dash 330 GTs are Series I, but not all Series I have a metal dash.

The Series I cars all have a transmission with overdrive. While it is not possible to walk up and tell if one has overdrive there still is a ‘tell’. The overdrive is operated by an electric solenoid and the switch is one of the column stalks. If there is a switch on the right side of the column, that is the overdrive switch.

The stalks on the left side operate turn signals and lights. If the switch is missing on the right side it would indicate either an Interim model or a Series II car.

The last interior clue to identify a Series I car is a look at the pedals. All Series I cars have the clutch and brake pedal arms go down through the floor because the master cylinder is located there. 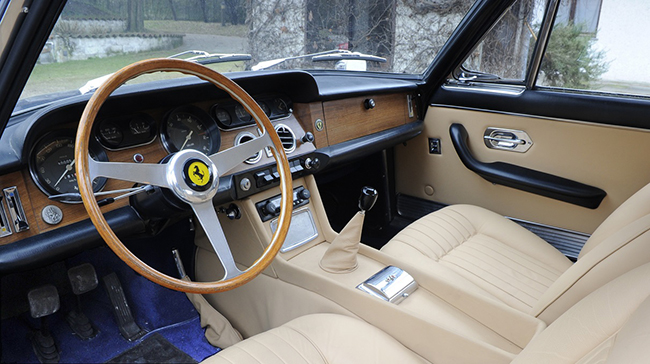 Series I Note: Pedals into the floor and switches in center of dash

If the hood is up, there are a couple of items quickly inspected to identify a Series I car. First there are two large brake boosters mounted near the firewall. These are Bendix Hydrovac units and usually there are two round brake fluid reservoirs. 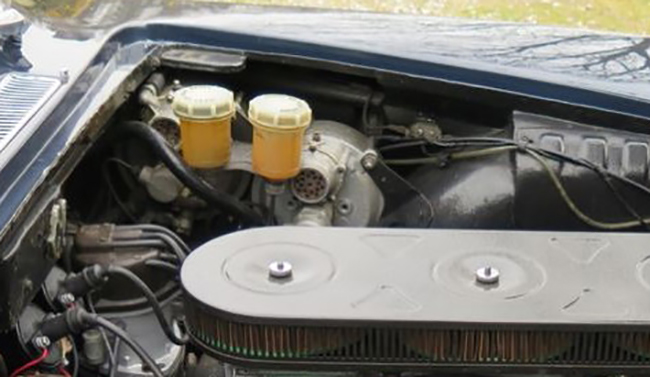 Series I Dual boosters with round reservoirs

Quick review, the short version. If it has four headlights and the brake and clutch pedals go into the floor, it’s a 330 GT 2+2 Series I.

The interior is the same except all Interim cars have a wood dash. The column switches also give away the Interim model.  There are only two stalks on the left side of the column. The overdrive switch is missing because Ferrari switched to a full five-speed transmission.

The other change was moving the pedal assembly to hang from the dash. This change also means the master cylinder is moved to the firewall. When looking into the engine compartment, the master cylinder and booster assembly are mounted on the firewall. The reservoirs will be small rectangular units with three separate containers, one each for front and rear brake circuits and the third for the hydraulic clutch system. 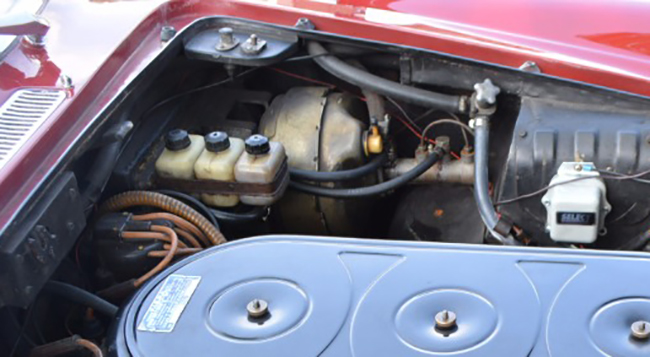 Extra credit for observing the water pump is now driven internally by the timing chain. This eliminates the possibility of having a belt problem causing an overheat to the engine.

Quick review, the short version. If it has four headlights and the brake/clutch pedals hang from the dash, it is an Interim 330 GT 2+2.

The Series II body was updated to have a single headlight on each fender. This resulted in a cleaner look and a more timeless design. The first serial number is 7553 GT built near the end of 1965 and the last Series II built is 10193 GT in early 1967. 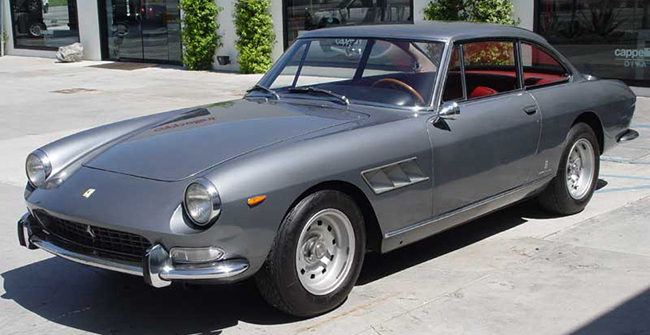 For the most part the Series II cars have all the mechanical features of the Interim model. There are some details in the interior that were updated. Switches for the fuel pump and lights were moved from the center of the dash over to the side between the steering column and the door. 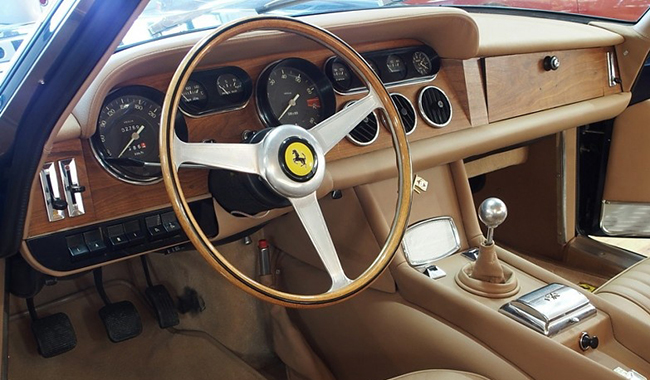 Typical of Ferrari, improvements are continual. Of the many cars Ferrari has built, there is not another model that has had so many changes or been more diverse in its production run.

While it may seem the 330 GT 2+2 was built in large numbers compared to other models, there are enough variations to make each unique. Another problem with the 330 GT model is its lack of a sophisticated chassis. The chassis lends itself similar enough to a GTO or TR that many have been converted into replicas.

This trait was both a blessing and a curse. For many years the value was so low on 2+2s many suffered from lack of maintenance and rusted away. Salvaging the chassis and engine to be converted into a replica has saved many that would have disappeared forever.

Thank goodness values have reached a point where restoration has become a viable option.